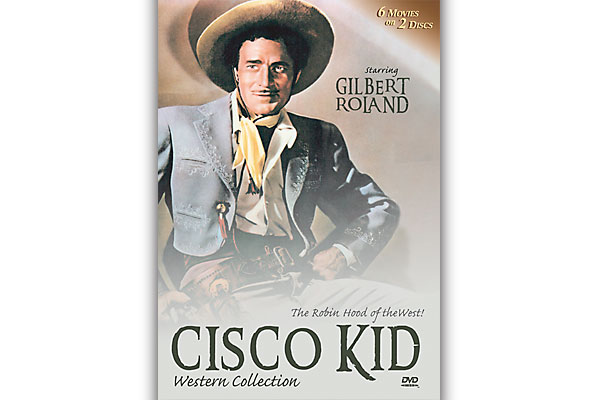 What’s interesting about Gilbert Roland’s Cisco of the mid-late 40s is that Roland was far better than the material, which is a decided plus. hese were lo-cal Monograms, so while William Nigh was an effective and resourceful director, it’s hard to get past the budgets and the scripts. Truth is, the Cisco Kid s not an interesting character, no matter who played him, or his partners, Pancho, Gordito or Baby.

The kid of O. Henry’s original 1907 story, “The Caballero’s Way,” was probably based on Billy the Kid (Bonney equals Goodall), and he was a charming, if dirty, little Billy. “He killed for the love of it—because he was quick-tempered—to avoid arrest—for his own amusement—any reason that came to his mind would suffice.” At one point in the story, the kid is “morose and unsatisfied. No true artist is uplifted by shooting an aged man carrying an old-style .38 bulldog.” his is not the Robin Hood of the Old West.

The first version of the story was shot in 1914, another in 1919 and In Old Arizona (1928), the version starring Warner Baxter, was the first full-length outdoor talkie. The sound of sizzling bacon heard in the film was said to have made mouths water in theaters across the nation—the reason, no doubt, for why the movie landed several Academy Awards.

What’s surprising about the kid in these films s how lecherous he is, and there is way more mush than would have fit the comfort zone of kiddie audiences at that time. he good news for us grown up kiddies s that two of the pictures in this six-movie collection feature costar Ramsay Ames, one of the great unknown actresses of movie history. She was a little Gloria Graham, a little Betty Bacall; it’s a tragedy that she never got scooped up by Howard Hawks or Nicholas Ray. Of her two appearances, he second picture on disc one, Beauty and the Bandit, has a fairly audacious spanking scene. Considering how much homoerotic subtext there is in these Cisco movies, this one lands butter side up.

If that’s not enough, you get to hear Glenn Strange, as Sailor Bill, deliver a rousing version of “Blow the Man Down,” and see Cisco demonstrate how to shoot tequila, lick salt and bite a lemon while parking a burning cigarette on the side of his head (I’d like to see Paul Henreid try that little number).

A footnote: hese Cisco films take place in the 1850s in Monterey, where Marlon Brando parked his own Billy the Kid picture, One-Eyed Jacks (1961).

Best Line: “Many times we come face to face with a horseman,” says Cisco. “He is not a pretty horseman. He is Death!”