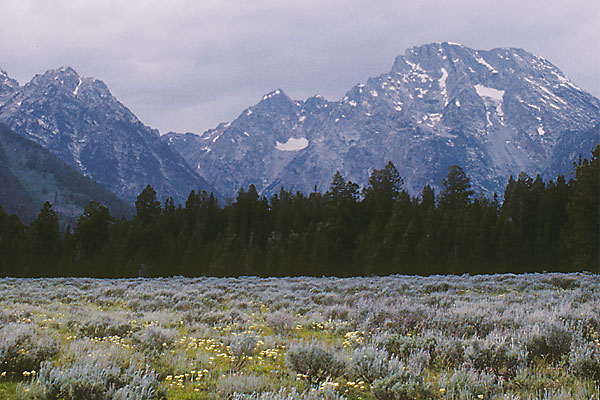 Legend has it that the note, written in charcoal, invitin’ those hearty souls livin’ that life wild and perilous to the 1838 rendezvous read:

“Come to Papoasia on Wind River and you will find plenty trade, whiskey, and white women.”

Well, here I am in Riverton, Wyoming, relivin’ the 1838 Mountain Man rendezvous. There is plenty of trade as I watch a gent in a wheelchair barter with a feller in buckskins over an Indian pipe. But no one’s offered me a slug of Taos Lightnin’, and the one woman I’ve met is about as old as Jim Bridger and a-jawin’ with her pet chicken.

Yes, this is the life. I feel like Robert Redford’s buddy Del Gue in 1972’s Jeremiah Johnson.

“Ain’t this somethin’? I told my pap and mam I was comin’ to the mountains to trap and be a mountain man; acted like they was gut-shot. Says, ‘Son, make your life go here. Here’s where the peoples is. Them mountains is for animals and savages.’ I says, ‘Mother Gue, the Rocky Mountains is the marrow of the world.’ And by God, I was right.”

Traders and Mountain Men began the tradition of the rendezvous in 1825 near Burntfork, Wyoming—and they’d continue until 1840, tradin’, drinkin’, socializin’. The tradition is still alive, at least, among re-enactors, history buffs and Mountain Man wanna-bes. You’ll find ’em from Bear Lake State Park in Utah (which was an actual rendezvous site) down to Santa Fe, New Mexico (which wasn’t). But for me, Wyoming is Mountain Man country. Shucks, up at Fort Bridger on Labor Day weekend, the rendezvous celebration draws some 40,000 folks each year, makin’ it second only to Cheyenne’s Frontier Days in the public-event department.

Ten of the 16 original rendezvous happened in Wyoming, and re-creations are goin’ strong. Why, come summer, you can hardly drive ’round the state without stumblin’ ’cross a feller with a Hawken rifle and a fur-pelt hat who keeps shoutin’ that tired ol’ Mountain Man sayin’, “Wagh!”

Like at Riverton. ’Long ’bout the week afore Independence Day, the 1838 site is re-created, open to the public, bringin’ in Mountain Men re-enactors and tourists from ’cross the United States.

Among the best is the Green River Rendezvous Pageant, held the second weekend in July in Pinedale. Sublette County and Mountain Men go way back. Trappers and traders rendezvoused in the area in 1833, 1835, 1836, 1837, 1839 and 1840, and the Pinedale re-enactment has been around since 1936. Not only that, but Pinedale’s Museum of the Mountain Man is a first-rate and underrated museum that captures the history and feel for those frontier legends.

Now I’m standin’ at the DC Bar Ranch outside Pinedale, where owner Tim Singewald looks like a Mountain Man, starin’ at the river down below, hearin’ the noise of the meltin’ snow—soundin’ like the wind a-blowin’ through the pines—as it roars down those faraway slopes to the river. You can’t help but be struck by a sense of awe at the beauty of this country, and the spirit of the Mountain Men.

I think of A.B. Guthrie, Jr., Vardis Fisher and Frederick Manfred, who captured those times in their novels. And of the legends: Liver-Eatin’ Johnson, Jim Bridger, Jim Beckwourth, Hugh Glass. And I again recall Del Gue a-tellin’ Jeremiah Johnson, “The Rocky Mountains is the marrow of the world.”

Here, in the heart of rendezvous country, I know: By God, he was right.