A Tale of Two Governors… 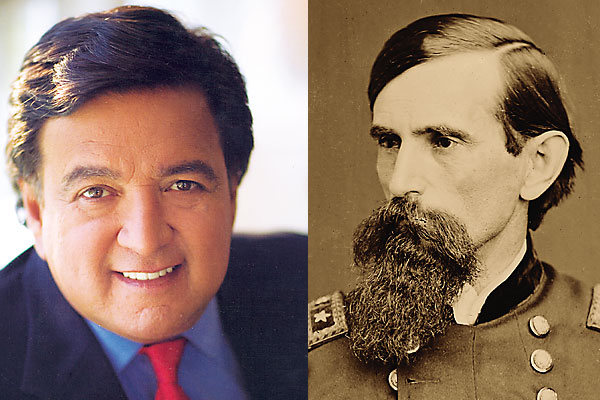 One put him under the ground, the other tried to pull him up, and both left him out to dry.

Despite Billy the Kid’s best efforts, and those of his many fans and detractors, a solemn grave in the farthest corner of the wildest frontier was to be his eternal home. Of course, it’s hard to blame either Gov. Lew Wallace or Gov. Bill Richardson for leaving him to lay in Fort Sumner; Billy the Kid was, and still remains, a hard target.
It wasn’t always that way. For a time, Lew Wallace and Billy the Kid actually worked together. They became pen pals when Billy wrote to the governor, suggesting that he’d testify about a local murder in exchange for a pardon. For more than a year, the author of Ben-Hur and the Kid wrote to each other, and they continued to exchange letters until a few months before the Kid’s death. In his correspondence, Wallace promised the Kid an exemption, or pardon, for the murder of Sheriff Brady in exchange for the Kid’s testimony. Billy did testify (although he didn’t make it to all of the trials). Unfortunately for the Kid, Wallace never made good on his pledge.
Fast forward 123 years later, when Gov. Richardson hired a lawyer for the Kid to find out why the pardon was not granted and to ensure the Kid received fair treatment as two Lincoln County lawmen tried to exhume his mother’s body. In an effort to finally prove that Billy the Kid, not some impostor, was shot and killed by Pat Garrett, Steve Sederwall and Tom Sullivan wanted to compare the DNA of the body in the Kid’s mother’s grave, in Silver City, New Mexico, with that of two notorious Billy claimants: Brushy Bill Roberts of Texas and John Miller of Arizona. Governor Richardson, astutely noting that the international media circus created by their quest would likely inspire New Mexico tourism, supported their quixotic effort.
The campaign was a disaster. The citizens of Silver City and Fort Sumner were infuriated by the notion, and Gov. Richardson was forced to drop the issue. Billy the Kid was threatening Richardson’s political career just as he had earlier threatened Wallace’s. All of the Kid’s deadly crimes made it difficult for both Wallace and Richardson to support the young man.
Two New Mexico governors, both internationally famous, tried to help Billy the Kid, but it was not to be. The Kid’s infamy made it impossible for either of them to deliver aid.
Jason Strykowski is a graduate student at the University of New Mexico.