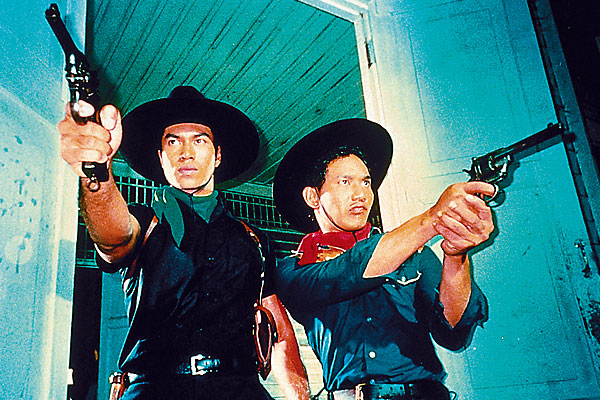 “I’m going to give you a chance—to die!” Thus teases a trailer on YouTube for a Greek Western made by and starring the Drosos brothers, Vasilis and Zacharias, called No Mercy for the Hunted. The film apparently takes all of its cues from the movies their neighbors to the north and west of them were making 40 years ago, and that includes the dramatic twangy music.

No way to tell for certain whether the movie is any good, or even interesting, but the narrator’s voice in the trailer sounds like he’s been living in a time-capsule bathyscaphe beneath 42nd Street since the glorious 1970s, and that at least is pretty entertaining. Good thing it’s in English because my Greek is not so good, but epharisto for asking.

Speaking of overseas Westerns, there do seem to be quite a few either finished or in post-production.

Takashi Miike is possibly the creepiest and, at the same time, most talented director in modern Japanese cinema; he boldly goes where most filmmakers would never even dream of going.  His 1999 movie Audition will boil your brain—don’t say I didn’t warn you.

His contribution to the “Masters of Horror” series on Starz, Imprint, was recently pulled from the lineup apparently because it was too raw—even the producer, Mick Garris, who is no stranger to excessive gore and horror, said it was possibly the most disturbing piece of work he had ever seen. Cutting edge, figuratively and literally, is putting it mildly.

Well, Miike has just wrapped Sukiyaki Western Django, which is supposed to hit screens this fall. Apparently Miike used to enjoy Spaghetti Westerns with his father years ago and decided he could reverse, in a sense, what Sergio Leone did when he transfigured the Japanese classic Yojimbo into A Fistful of Dollars.

Sukiyaki Django Western takes place in 12th-century Japan, even though some of the costuming is strictly Billy the Kid. The cast is loaded with top Japanese film stars, but Miike made them study English because the movie will be an English language film. (Maybe he can get some tips from Mel Gibson who directed two films in a row that were not in his native tongue—Aramaic and Aztec.) The capper is that Quentin Tarantino has a part in the movie as a character named Ringo.

Can’t tell you much about Big City, except that it’s a Western, it’s French, made in Canada, will be released eventually in one market or another sometime n the next year and it’s cast almost entirely with children.

Here’s some more: Somewhere in 1880 or thereabouts, the adults of Big City abandon their town to defend a caravan that is under siege by hostiles, leaving all the kids, a drunk and one other adult (the weak one, their press calls him) in charge.

“From that day on, the weak one becomes sheriff, the old alcoholic, Justice of the Peace, and Big City obtains a Mayor child, a barman child, a grocer child, a carpenter child, etc. ‘But the Indian children will not be long in showing the end of their nose… Big muddles in Big City!’”

I couldn’t have said it better. The director is Djamel Bensalah, and the picture, which looks pretty good, has a website: bigcity-lefilm.com, in French.

One final note. The film features Eddy Mitchell (above), who started out in the French rock ‘n’ roll band es Chaussettes Noires (The Black Socks) and had a great pompadour. He has a role in Big City, which makes him either the drunk or the weak one. Hard to tell at this point. Mitchell toured a lot in the 1960s, and Jimmy Page used to show up in his pickup band when he was playing London. e started acting in 1981, and hosted a TV series from 1982-98, La dernière séance (roughly, The Search for the Ghost in the Rear).

Tears of the Black Tiger

No movie in recent memory has caused more head scratching and creative analysis in the critical community than the thoroughly strange Thai Western, Tears of the Black Tiger, made in 2000 but released by Magnolia Pictures here in January.

There are good reasons for this—it’s not so much that it doesn’t fit into a specific genre, but that it fits into so many genres that it creates a new category altogether. lso, by western, i.e. non-Asian, standards, the movie seems delirious, some kind of fever dream—is it avant garde, is it serious, is it camp? Are we laughing with the movie or at it?

The crux of it is, the movie is completely derivative and wholly original. It is at once funny, sad, bizarre and extremely violent—whether it’s entertaining or not depends entirely on what one brings to it.

As for it being a Western, the film features traditional touchstones: cowboy clothing, gun duels, horses, raids, outlaw camps—the whole shebang. Locking the picture into an era, though, is not quite so easy to do.

Dum (Chartchai Ngamsan), the Black Tiger, is carrying a one-for-my-baby torch that won’t be drowned. is unattainable sweetie since childhood, Rumpooey (Stella Malucchi), wanders through the picture with one of those pained 1950s Lana Turner faces. She is likewise tortured by her love for Dum. That’s the melodrama part, which is explained through a series of dovetailed flashbacks.

And then there’s Mahasuan (Supakorn Kitsuwon), Dum’s fellow outlaw, who early on challenges Dum to a gunfight. His way of goading Dum into battle is by throwing Dum’s harmonica on the ground.

In a day-glo set left over from some Turkish rip of The Wizard of Oz, the two square off. With speed that would put the silliest Terence Hill gunslinger to shame, Dum chooses to kill the snake in the tree above Mahasuan, which prompts his challenger to swear eternal loyalty. They share shots of blood-infused liquor and drunkenly dance in a Buddhist sweat lodge of some sort. hey laugh. hey hug. You get it.

Later, there is a huge, pitched, Wild Bunch, slo-mo battle between the Thai Federales and Dum’s gang, which actually involves the use of LAW missile launchers.

Did I mention there are also musical numbers and a score that swipes entire sections from Ennio Morricone’s soundtracks—he’s most known for his work on Sergio Leone films such as The Good, the Bad and the Ugly—as well as a bit of Texas Swing?

There’s not much point in going on—describing this picture by director Wisit Sasanatieng (bottom of page) is hard enough. In any case, by now you are either intrigued or completely dissuaded from seeing the movie. If you still miss Johnny Mack Brown, it might be best to avoid it.

On the other hand, anyone who cherishes the thoroughly absurd singing cowboys pictures or Johnny Guitar (1954), or Spaghetti Westerns in general, or Sonny Chiba chop socky or, say, 1970’s El Topo, might want to add this movie to their list.

Tears of the Black Tiger s still playing through April n a number of cities. Check magpictures.com or details. The DVD is available April 24.