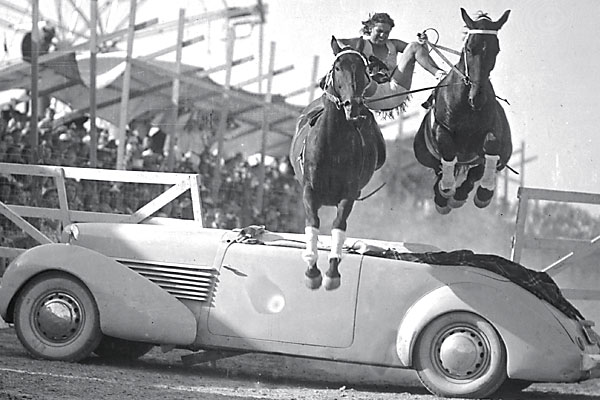 Honkytonk Sue, the Queen of Country Swing, has been dispensing her sage advice since she first appeared in the June 1977 National Lampoon.

She saves Paul McCartney’s ranch and converts the reunited Beatles to Country Western music. She belts outer space aliens who can’t even seduce her with a teleported Merle Haggard. And pickup-driving cowboys come to her rescue when a disco-lovin’ diva captures her. Her near brush with matrimony (“Marry me, or ah’ll kick yer ass.”) would never have happened. We don’t think the Good Ol’ Boys could have handled such heartbreak.

No matter where she finds herself, Sue is always on the look out for “Mr. Raht,”  even though “Mr. Ah-Don’t-Think-So” usually seems to find her.

Sue didn’t make it to the big screen, despite a Columbia Pictures purchase and a screenplay by Larry McMurtry and Leslie Marmon Silko, but she was probably too hip for the ’80s anyway. Now that we’re in the 21st century, her brand of humor just may fit (hint, hint).

It may not surprise you to know that Mabel Strickland, Vera McGinnis, Prairie Rose, Tad Lucas and other dust kickin’ rodeo cowgirls gave birth to Sue. After reading the article, “The Way We Dress,” featuring cowgirls and cowboys in period gear, in the 1977 Winter issue of Persimmon Hill, I knew I had a cowgirl in me who could spit nails like the rest of them.

So when it came time for us editors to name the first winner of our first annual museum issue, memories of those cowgirls came flooding back to me. Their home? The National Cowboy & Western Heritage Museum in Oklahoma City.

The museum and this magazine share similar missions. In 1955, two years after True West began preserving our heritage by telling the true stories about the West, Chester A. Reynolds began working on a museum that would “preserve and interpret the heritage of the American West for the enrichment of the public.” The doors finally opened atop Persimmon Hill 10 years later.

The more than 200,000 square-foot facility boasts Western and Indian art and artifacts, and an extensive collection focusing on the American rodeo, with saddlery, world trophies, barbed wire and, of course, photographs.

Which bring us back to Honkytonk Sue. I didn’t choose the exact photographs that first inspired me because, frankly, those pictures have been published widely and you’ve probably already seen most of them in the pages of this magazine, too. Since so much of the museum’s gems are hidden, I wanted to present some cowgirl images that you aren’t likely to have seen.

They’re all still the kind of girl who would belong to Sue’s posse.

Thanks National Cowboy & Western Heritage Museum for helping out  with my Scrapbook Collection!