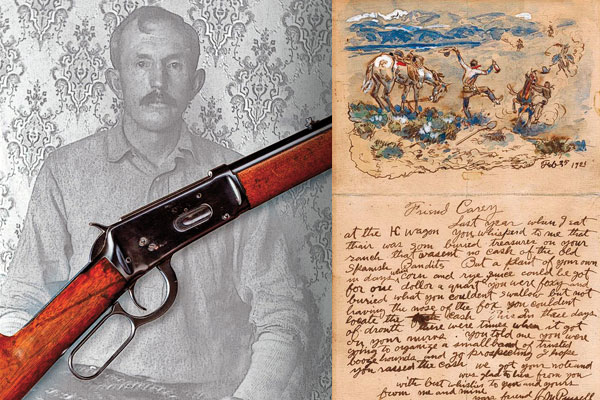 On June 1, 1903, three men who knew Tom Horn rode together in the parade at Cheyenne Frontier Days in Wyoming. Horn had been found guilty of murdering 14-year-old Willie Nickell the previous October. The Winchester Model 1894 .30-30 rifle he carried at the time of his arrest hammered down as the top lot, for $130,000, at High Noon’s auction in Mesa, Arizona, on January 24, 2015.

Horn gave the rifle to Charles B. Irwin, one of the men in the parade, and the family has owned it all these years, until this auction. Another man riding with stock contractor Irwin was Buffalo Bill Cody, the showman behind the Wild West extravaganza that began in 1883. After Horn beat Charlie Meadows in a steer-tying event in Phoenix, Arizona, on October 17, 1889, the news reached Cody, who was organizing a European tour for his show. He asked both Horn and Meadows to join him; Meadows joined Cody’s show overseas, three years later, but Horn dismissed the idea entirely.

The stock contractor and the showman were joined in the parade by the cowboy president, Theodore Roosevelt. As chief packer during the 1898 war in Cuba, Horn rode up San Juan Hill with Roosevelt and his volunteer cavalry known as Teddy’s Rough Riders. Despite contracting yellow fever and losing 40 pounds, Horn served admirably, earning high praise from Capt. Marion Maus. Horn even supplied mules directly to Roosevelt, but the chief packer may have given himself more credit than he deserved; he claimed he gave the mule to Roosevelt before the defining battle at San Juan Hill. But since Roosevelt rode his horse in that battle, Horn likely gave the mule to him afterwards.

After the war, Horn recuperated at John C. Coble’s Wyoming ranch near Iron Mountain. Until 1894, or perhaps earlier, he tracked outlaws for the Pinkerton National Detective Agency. He went back to his cattle friends to work as a range detective. Historians suspect Coble and partners hired Horn to kill sheepman Kels Nickell in July 1901, but Horn accidentally killed Kels’s son, Willie, instead.

Oh, to be the horse who heard the conversation that day in the parade. Given that all three knew Horn, Irwin must have told his partners of Horn’s death sentence. After all, he was doing everything he could to get the sentence commuted to life imprisonment. Roosevelt would have carried the most influence, of course, but perhaps he still had a bad taste in his mouth for the mule packers during that campaign, whom he had denounced as cowards after the war.

Irwin didn’t succeed. On November 20, 1903, Horn walked a few feet from his Cheyenne jail to the gallows. Irwin and his brother sang “Life’s Railway to Heaven” before the trap opened and Horn gasped his last breath.