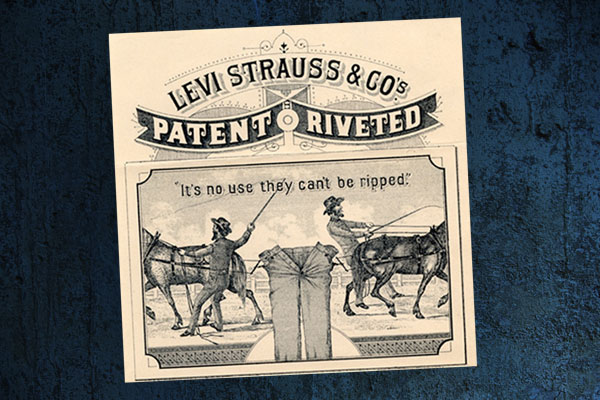 Find something they couldn’t do without. Whiskey and women comes to mind but Levi Strauss found something even more enriching. He ran a wholesale dry goods company and sold clothing. He acquired some canvas and planned on making tents but the miners said, “Levi, we need durable pantaloons.”

So he began making pants out of the tent material. It was stiff and cumbersome so he started making pants with material from De Nimes, France that was dyed blue to hide stains, durable but more flexible. That’s why we call ‘em “denims.”

The material had been used for work clothes for some time but what we know as blue jeans began in 1873 when Jacob Davis of Reno, who’d been buying pant material from Levi approached him with the novel idea. Davis was putting rivets on the points of strain, mainly the pockets and the crotch but needed a partner. Levi agreed to go partners and they got a patent, forcing competitors to find other ways to keep the pockets on until the patent expired in 1890.