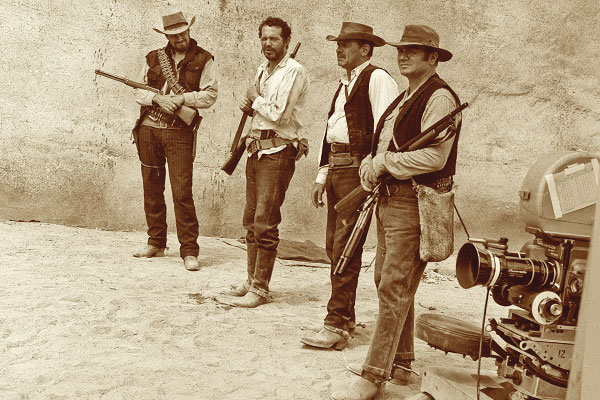 During the “Golden Age” of film, which spanned the 1920s through the early 1960s, moviemakers often relied on the classic lines and smooth action of the 1892 Winchester to depict the archetypal saddle rifle of the Old West. Thanks to the likes of John Wayne and many other movie cowboys, this rifle has probably seen more use in Western and adventure films than any other rifle associated with the American frontier.

In 1892, smokeless powder was beginning to change the face of the firearms world, yet the older blackpowder chamberings were still quite popular. Anticipating the changeover from blackpowder to smokeless powder, Winchester brought out a new and more modernized rifle for its popular .44-40, .38-40 and .32-20 cartridges—one that would readily accept blackpowder ammunition, but with the additional strength necessary to handle the greater pressures generated by the new smokeless propellants.

Taking the basic mechanism of Winchester’s larger John M. Browning-designed 1886 model, Winchester simplified and scaled down the component parts, which produced a reduction in the weight of the ’92 Model and the cost of its manufacture. The strong dual locking bolts, the breech bolt, the extractors and the levering system of the big ’86 were retained, giving the ’92 the silky smooth action of its big-game predecessor. The new model combined an updated 1873 model with a scaled-down Model 1886.

The first 1892 Winchesters were finished in time for delivery to the company’s warehouse in New Haven, Connecticut, by May 3, 1892, and the gun made its public debut in the July 1892 catalog. The short rearward travel of the ’92’s bolt relegated the model for use with the shorter, above-mentioned cartridges only. In August 1895, Winchester developed the short .25-20 chambering for the ’92 and added it to the line. The company produced a few rifles in .218 Bee caliber on special order in 1935-1938, but never advertised them.

Due to the popularity of the older Winchester Center Fire chamberings, coupled with a hardy demand out West for a lightweight, rapid shooting, inexpensive rifle, this new Winchester, which initially sold for just $18, was an immediate success. A full 23,701 examples were produced before its introductory year ended.

Reintroduced by Winchester back in the late 1990s, due to the demand by cowboy action and cowboy mounted shooters, the gun is back in production, along with a number of clones put out by other manufacturers.

A big part of the Winchester ’92’s ongoing appeal is undoubtedly the nostalgia and romance created by the likes of John Wayne, Chuck “The Rifleman” Connors, Ben Johnson, Jane Russell, Kirk Douglas and other action-adventure stars who, for decades, tamed the celluloid West while packing a Model 1892 Winchester. The rifle made a transition from the frontier to the big screen for several reasons. In the early days of the motion picture business, many of these rifles were around at cheap prices. Studios also found the ’92 handy because the rifle, chambered in the same calibers (.38-40 and .44-40) as Colt and other six-guns of the time, was capable of using the same “five-in-one” blanks as these revolvers. Best of all, the ’92 Winchester had the classic look of a frontier-era lever-action rifle.

From the frontier West to the reel West, the 1892 Winchester has earned a permanent place in firearms and Western lore.