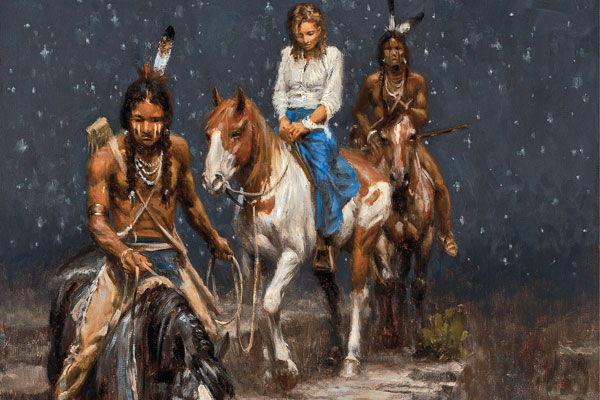 In 1864, as the Civil War ground toward its bloody finish, the West was aflame in widespread Indian conflicts of unimaginable violence and scope. Unconcerned by the dangers of traveling in small groups, a party of Idaho-bound emigrants camped on Little Box Elder Creek in present-day Wyoming. On July 12, they were detected by a roaming party of Oglala led by their war chief, Ottawa.

As the Indians approached, the emigrants prepared to issue a welcome of powder and shot, but Fanny Kelly dissuaded  them. She passionately pointed out the Indians’ overwhelming numbers. Fanny’s husband, Josiah, acceded to her pleas and parlayed with the Sioux. The warriors demanded provisions and a prized racehorse. The Kellys gave everything asked for, save Josiah’s guns.

The emigrants were allowed to go in peace, but became apprehensive as the warriors continued to travel with them. Approaching a rocky glen and fearing a trap within, Josiah called a halt. Josiah convinced the leader to accept a farewell feast before departing.

As the emigrants prepared dinner, the Oglala attacked, killing or wounding all seven men. Fanny, her seven-year-old niece and adopted daughter Mary and another woman and child were whisked into captivity. Fanny devised a plan for Mary to escape. After dark, Mary slipped off the horse carrying her to make her way back to the massacre site.  But warriors detected Mary’s escape and headed back to kill her; Mary’s scalped and arrow-ridden body was discovered a few days later by her father and his soldier escorts.

Fanny despaired the loss of her entire family and the role her advice had played in these events. After a disastrous attack by Union Brig. Gen. Alfred Sully’s force, the Sioux threatened to burn Fanny at the stake; Ottawa spared her. For the next five months, Fanny was passed around between tribes.

Fanny gained notoriety while in the Indian camp at a little-known action near Rhame, North Dakota. The September 5 fight at a makeshift sod fort, Fort Dilts, was one of the only recorded iconic wagons-in-a-circle siege, as Sitting Bull’s warriors surrounded James L. Fisk’s wagon train. Fanny penned notes from the Indians to the besieged wagon party. She cleverly inserted pleas for her release among the Sioux demands. Fisk unsuccessfully tried to ransom her, and the Indians scattered when an Army relief force arrived.

Fanny became a valuable commodity and eventually was turned in for ransom  (reportedly 19 horses) at Fort Sully on or around December 9. Her captors and subsequent owners had moved her across hundreds of miles of the Northern Plains. She experienced prairie fires, warfare, starvation, physical abuse and scrapes with death. Fanny was reunited with Josiah, and her captivity narrative remains a classic.

Survival Tip: How to Start a Fire

Prior to the invention of the friction match in 1826, starting a fire often involved flint and steel. Iron has properties that allow it to spontaneously ignite at normal temperatures. Flint, being harder than steel or iron, detaches particles of iron when the two are struck together. The sparks can kindle various materials, such as a char cloth. You can make this blackened cotton cloth with an Altoids mint tin. Punch a small hole in the lid, so the gas doesn’t pressurize and cause the tin to explode. Closely pack a cotton cloth, like a white t-shirt, inside the tin and heat over a fire. Wait until the tin cools to open. Flint is common in most areas of the West and easy to find. Iron is found in many places naturally, though our ancestors have littered the West with metal refuse that you could also use. You can fabricate tinder by shredding a piece of rope, or create it naturally, through evergreens, especially pines. Look around and see what the environment has to offer. If you can make a hot spark and have dry tinder, you can have fire.

History in Art
By Illustrator Andy Thomas
Fanny Kelly’s account is melodramatic and no doubt sensationalized. I chose to illustrate her journey after she had parted from Mary: “…the dizzy, fearful heights leading over the dark abyss, or the gloomy, terrible gorge, where only an Indian dares to venture…. I remember looking longingly at the dim shelter of these friendly trees, and being possessed by an almost uncontrollable desire to leap from the horse and dare my fate in endeavoring to reach their protecting shade; but the Indians’ rifles behind me, and my dread of instant death, restrained me.”