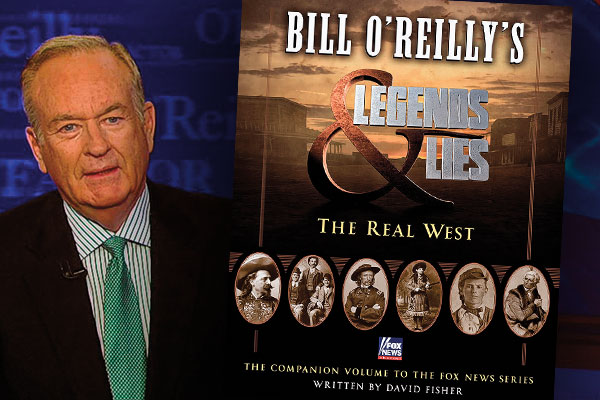 Bill O’Reilly is no stranger to digging into history. The political commentator and host for The O’Reilly Factor on Fox News Channel has put his History degree to work in his nonfiction books, particularly Killing Kennedy, Killing Lincoln and, most recently, Killing Patton, all cowritten with author Martin Dugard.

Like O’Reilly himself, the books have invited controversy over their accuracy. But he has counter-punched his critics, all while his book sales number in the millions. And let’s not forget, even as some lambasted the Lincoln book, Mother Jones called the film version based on it the “most historically accurate” of the recent biopics, which included Steven Spielberg’s Lincoln.

Now O’Reilly is looking further into the history of the United States. And he’s heading to the Western frontier to stake his claim.

Executive produced by O’Reilly and premiering on April 12 on Fox News Channel, Legends & Lies promises to target the hokum surrounding the most iconic outlaws and lawmen of the West, and blow away the over-told tall tales, letting audiences see the truth behind the image.

Legends & Lies is an experiment in form for the network, which has never attempted this kind of series before, much less one digging into the truths of the Old West.

“There are 10 episodes, each one focusing on a different character from American Western history, spanning many decades,” producer John Finley says. “We go back as far as Davy Crockett, in the early 19th century, and all the way through the 1890s, with Billy the Kid, Doc Holliday. With regards to Billy, for example, there’s a lot of mythology to explore.”

The yarn spinning about the Kid has been unending, even in his time. Newspapers reported on geezers claiming Sheriff Pat Garrett never fired the fatal shot that killed the Kid, or that they themselves were the Kid. Add to this, more than 100 years of novels, movies and TV shows about the outlaw, and an iconic, but distorted, image is built.

Legends & Lies intends to strip the myth from each pioneer, through interviews with historians, dramatic re-creations of the subject’s life and scientific analysis about the person’s death.

Says Finley, ”We talk to some forensic experts about these deaths. We’re not CSI, but we are looking at events in a different way for a documentary about the West, and the audience sees the forensic details, and these stories in a new way.”

O’Reilly’s persona alone lets Legends & Lies viewers know the series won’t be shy in shaking up concepts about the history of the American West and about the people who made it.

“Bill O’Reilly is one of the most powerful brands in all of television,” Finley says, “and he’s extended that very successfully. He has a great passion for history, and was a great, natural fit for this project, and our audience.”

A Legends & Lies companion book, written by noted novelist and biographer David Fisher, will be released in April by Henry Holt and Co. Going into greater detail about each episode, Fisher’s extensively illustrated volume covers mountain man Kit Carson, gunfighter Wild Bill Hickok, Deputy U.S. Marshal Bass Reeves and other pioneers whose lives will be explored on the show.

Western Writers of America President Sherry Monahan is one of the on-camera experts, and she says she was impressed by Legends & Lies research: “Their list of questions was exhaustive. They were also open to me suggesting questions they hadn’t thought of. I’ve worked on documentaries in the past and was occasionally asked to read a statement that was unverified, which I refused.”

The New York Times bestselling author Chris Enss was also interviewed. She feels the show is trying for a complete view of the historic figures, warts and all: “The producers for this series have done a sensational job gathering together historians, professors, authors and even psychologists to speak to the motives of the Western legend’s actions they are spotlighting.”

The interest in Legends & Lies—some of it curiosity, some pundit speculation and some viewer excitement—is amazing for a show that has not yet aired. (Screeners were not made available by press date.) Whether this series receives good reviews or bad, the fact that it is being launched by media powerhouse Fox News, with O’Reilly leading the charge, means this series could be seen by more people than any other documentary about the Old West.

“From the Fox News Channel perspective, this is the first series like this we’ve ever done, and that’s exciting,” Finley says. “We’re producing this for a mass audience, and I think it’s going to appeal to a wide range of people, the ones who know about the West, and the ones who want to find out.”