Shipping Cattle to Market by Rail 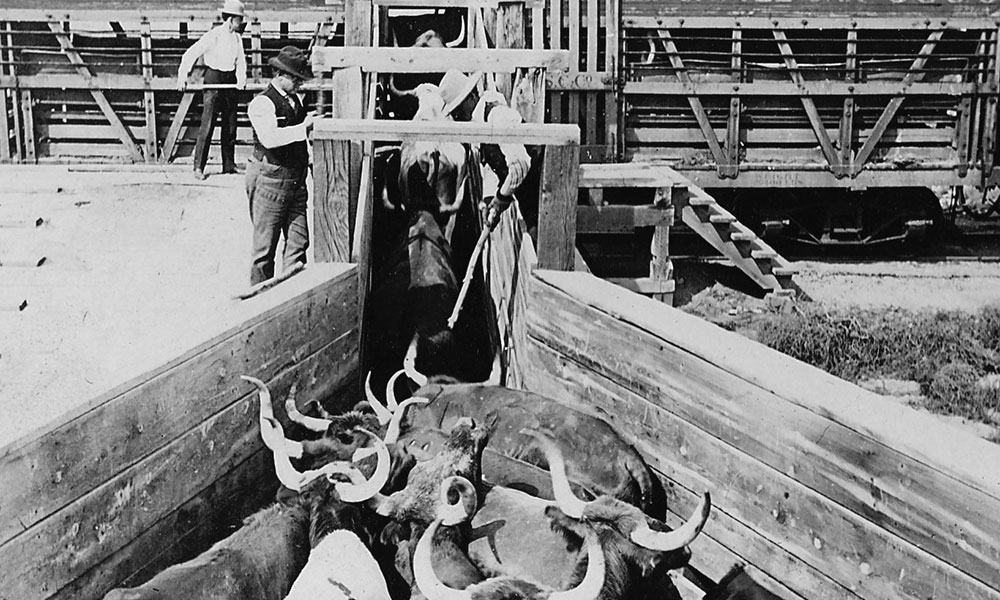 Have you ever watched those trail driving movies and wondered what happened after the cattle were delivered to the railhead at Abilene, Dodge City or Wichita? These trains were heading some 500 miles to Chicago and would have been grueling on the cattle, train crews and cowboys. How were they watered and fed along the way, or were they?

When one thinks of transporting millions of cows hundreds of miles to a slaughter house and processing seems a little strange today but for more than a century that’s how it was done. The first rail car dedicated to livestock with roof, slatted sides for air and a sliding door for access came during the 1860s. Soon, the wood construction was replaced by steel, food and water troughs were installed and pens were added to keep animals from trampling each other. A new stock car in 1880 was among the first practical designs to include amenities for feeding and watering the animals while en route.

In time laws were enacted that required railroads to offload animals every 36 hours or so just so they could stretch their legs and recuperate. Livestock handlers could ride with their herds in special cabooses.

The suffering in transit as a result of hunger, thirst and injury was considered as inherent to shipping of cows over a great distance. Laws to prohibit this maltreatment weren’t effective until the Federal Meat Inspection Act of 1906 was enacted.

How about when they got ‘em to market? The granddaddy of all the stockyards was the Chicago Union Stock Yards.  They were processing two million animals yearly by 1870 and in two decades the number rose to nine million. That included hogs, cattle and sheep. When it came to butchering hogs nothing was wasted. It was claimed they processed everything on a pig except the squeal.

Between 1865 and 1900 approximately 400 million livestock were butchered within the confines of the Yards. Chicago became the meat-processing center of the world.

The Union Stock Yard Company itself was never in the meatpacking business, but provided facilities for transshipment and sale of the animals.  The meat packers congregated to the west of the yards. This half square mile to the west was known as Packingtown. It was connected to the yards by alleys for driving stock from the trains to the packing houses.

I’m reminded of a story I believe was told by J. Frank Dobie in his book Longhorns, about a longhorn steer that was slapped on the assembly line but managed to dodge the sledge hammer that was supposed to knock him down. He jumped off the contraption, jumped out of a second story window, swam across a river then high-tailed it towards Texas. All this to the cheers of the slaughterhouse employees.

The Kansas City stockyards began in 1871 and were second only in size to the Union Stock Yards in Chicago. It began as a resting place for cattle trains on their way to Chicago. In its heyday it could handle 60,000 cattle in a day.

In 1878 Gus Swift introduced the first practical refrigerated rail car, allowing the shipping of fresh meat. This enabled Swift and Company to ship meat all over the United States. The refrigerator car radically altered the meat business. Now the animals could be butchered and processed close to where the meat was going to be sold. The stockyards industry died with decentralization, the development of feedlots and the growth of the trucking industry.