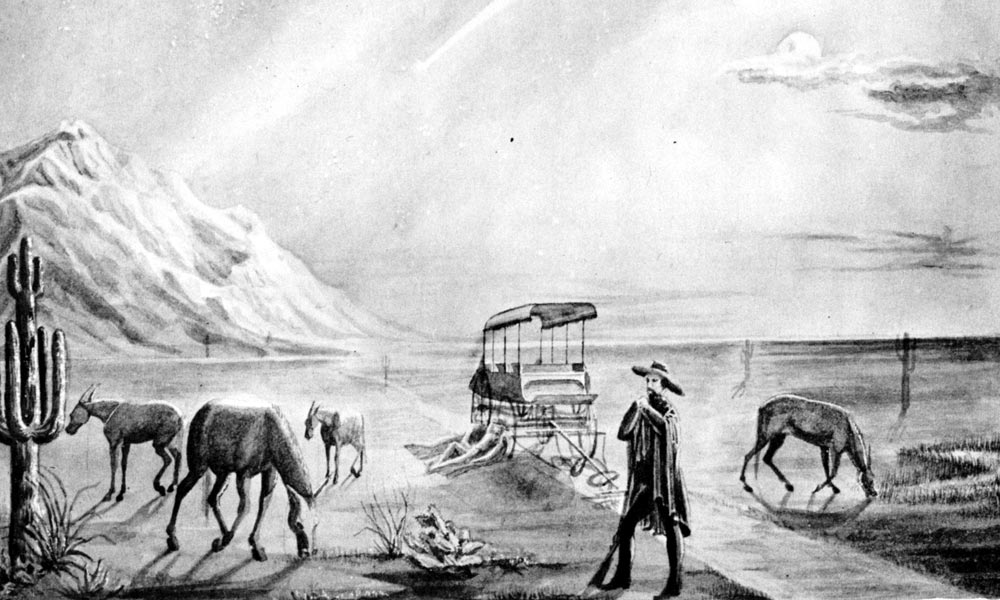 Following the discovery of gold in California in 1848 Americans were pouring into the Mother Lode country and the there was an immediate clamor for mail service. The favored route was to run from St. Louis through South Pass to San Francisco but when the contract came out from the postmaster general it called for the route to go from San Diego, through El Paso, to San Antonio.  This angered the folks in northern California caused a local newspaperman to declare the line went “from no place through nothing to nowhere.”

The stage line was operated by James Birch, who’d made a fortune running stagecoaches during the gold rush in California. Birch had some powerful friends in Washington so it was no surprise that when the contract was awarded he emerged the winner.  He picked up a $600,000 government subsidy to haul the mail, and passengers the nearly 1,500 miles from San Diego to San Antonio.

The run began at each end of the line at 6 am on the ninth and twenty-fourth of the month. The fare one way was $200 and included all meals and a baggage allowance of 30 pounds.

The passengers complained loudly of the difficulties encountered.  There were 87 way stations, but only three, San Antonio, El Paso, and San Diego had any amenities.

Stagecoach travel wasn’t for sissies.  The rest were little more than brush and mud hovels.  Floors were dirt and as one writer said, to be much like the ground outside except not as clean.

The stage traveled only during the day time hours so the passengers were required to sleep in these dreary places.  The food was barely edible, tough beef or pork, fried in a grimy skillet, coarse bread, mesquite beans, and a mysterious concoction known as “slumgullion.”  There was lethally black coffee to wash it down.   Dessert was a nasty compound of dried apples that paraded under the name of apple pie.  The stage station always provided plenty of mustard for passengers who complained about the flavor of the food.

San Antonio and San Diego Mail was quickly dubbed the “Jack Ass Mail” because in the most severe part of the journey, crossing the California desert just west of the Colorado River no stages rolled.  The passengers had to get out of the coach and climb on the hurricane deck of a mule. Birch was lost at sea in 1857 and the company failed soon after.  Still, the Jack Ass Mail became this nation’s first transcontinental passenger and mail service.