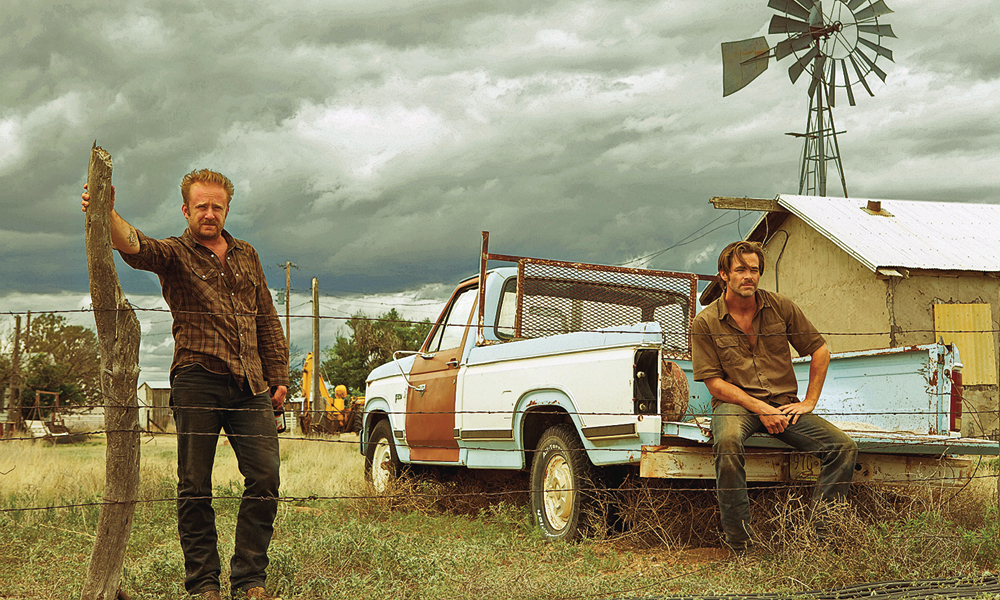 You know you’re in Texas when a pair of ski-masked men rob a crowded bank and nearly every customer pulls a gun and opens fire. The impromptu posse that takes off after the robbers would throw a scare into the James Gang!

Hell or High Water is the modern-day Western story of brothers who, like Jesse James and brother Frank, have problems with banks: in this case, the bank’s imminent foreclosure on Ma’s ranch. Ben Foster plays Tanner and is as frightening here, as a gregarious fellow, as he was playing Russell Crowe’s humorless wingman in 2007’s 3:10 to Yuma. He’s just out of prison, and brother Toby, played by Chris Pine (known for his role as Capt. James T. Kirk in the rebooted Star Trek), divorced and with sons to support, comes up with a wonderfully awful idea: raise the money for the mortgage by robbing branches of the bank that hold the paper.

Hell or High Water is also the story of the pair of Texas Rangers investigating the holds-ups: widowed, soon-to-be-retired Marcus (Jeff Bridges) and his esteemed, but much-badgered Comanche partner Alberto Parker (portrayed by a Comanche, Gil Birmingham—Billy Black of the Twilight films).

Birmingham tells True West he was happy to play Parker for many reasons. “It’s rare that you see a character of that ethnic background portrayed in such a positive light,” he says. “The natives are still here; we’ve been portrayed in the past as if we don’t exist anymore. [This movie] had a special meaning for me because my father was a lawman for most of his career.  He was a military policeman and also a Texan, so many of these aspects fell into place just automatically.”

Hell or High Water is helmed by David Mackenzie, a director and writer who has elegantly tackled Crime Dramas that include 2003’s Young Adam, Sci-Fi flicks that include 2011’s Perfect Sense and Romantic Comedies such as 2011’s Tonight You’re Mine.

“I did have qualms about making a Western,” Mackenzie tells True West. “Not necessarily as a Scot, because many of the protagonists of the story of the West were of Scots ancestry, but as someone with a strong admiration for the great films in that genre—it’s hard to follow in those footsteps. I abandoned an attempt to write a Western a few years ago because I felt like I was at the bottom of a butte in Monument Valley looking up at a genre I couldn’t possibly add to.  When this script came along, it was like a gift that allowed me to connect to this lineage in a fresh and interesting way.”

That script is by Taylor Sheridan, who starred in FX’s Sons of Anarchy before turning writer, stunning audiences with 2015’s clever and tough Sicario, about an FBI agent embroiled in the drug wars at the U.S.-Mexico border.

“When I came across this script I thought it was absolutely brilliant,” Birmingham says. “I was curious to know how he had the sensibilities about the native character, and it turns out he lived on the Lakota reservation for six or seven years.”

One major appeal of the film is Jeff Bridges’ performance as a Texas Ranger, a fitting follow-up to his Rooster Cogburn portrayal in 2010’s True Grit and a strong addition to a half century of Western roles that began on father Lloyd Bridges’ series, 1965’s The Loner. Like John Wayne, Bridges has matured into his later Western roles, bringing layered and nuanced qualities.  Says Mackenzie, “I am an enormous fan of Jeff’s and his films. He was incredibly creative and a real gentleman—it’s a fantastic performance with some real magic.”

Birmingham says he and Bridges have a strong personal connection.  “I was surprised at how similar we were—he’s a very Zen kind of guy. We also connected in a major way, with music.  Every time we went on the set, I can hear Jeff saying, ‘Did you bring your guitar?’  I said, ‘We’re working, Jeff.  When are we going to have time?’  ‘Well, you never know.  But if we do, we’re going to jam!’”

The film’s cat and mouse story, more rooted in character than elaborate plotting, features a gem of a scene early on in which an old man is showing a teller a shoebox full of coins when the robbers enter the bank.  The old man is Buck Taylor, Newly from CBS’s Gunsmoke, who has taken over for the late Harry Carey Jr. and Ben Johnson as the man you cast to prove you’re making a real Western.

With two pairs of characters diametrically opposed, the question arises: Who do you root for?  Birmingham’s character has no pity for his quarry. “It’s the Ranger creed: our job is to protect property and life.  [The brothers’] motivations aren’t pertinent to us,”  he says.

Director Mackenzie doesn’t want the audience to see things quite so black and white. “It was always the intention of this film to have some sympathy for the outlaws,” he says. “There’s a long tradition of this sympathy in Scottish culture—the defiant outlaw-hero ballad—that was directly transplanted into American culture.  I think we care about these guys because, in different circumstances, it could be us doing what they’re doing.”