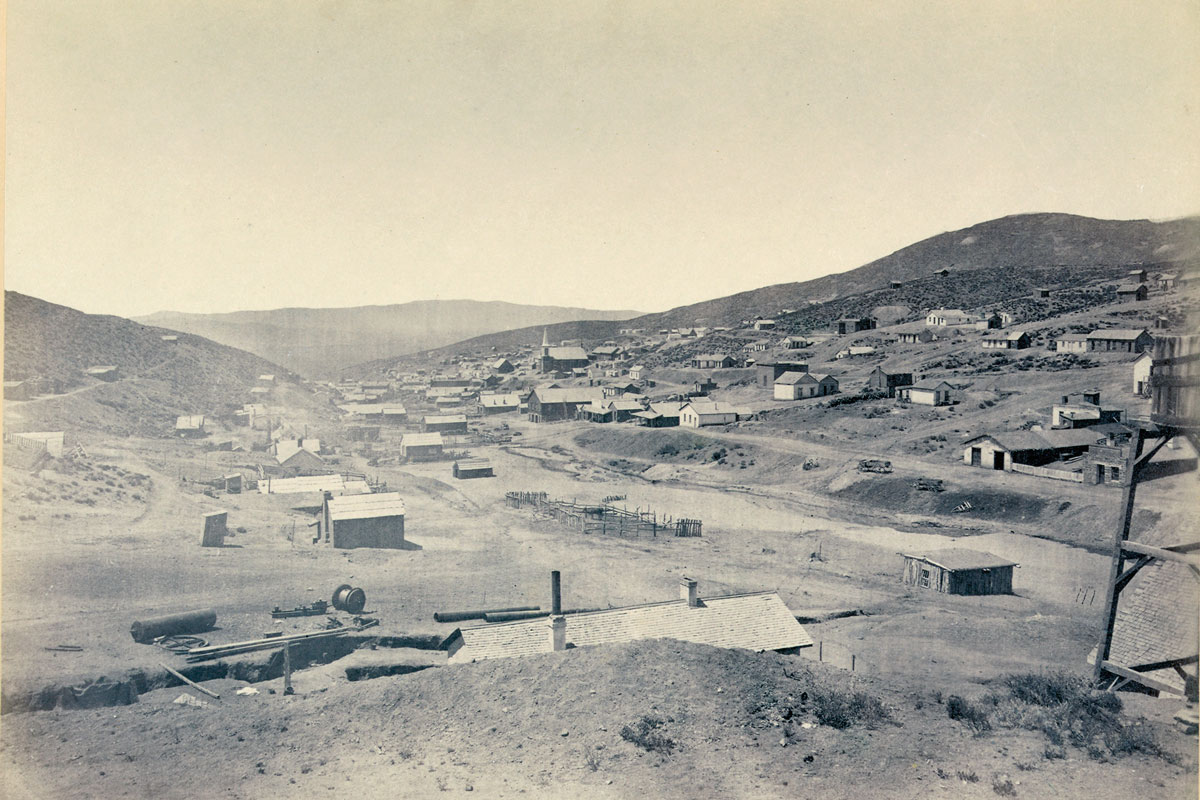 Austin’s founding happened in 1862 when a Pony Express horse kicked over a rock and behold— a jackpot in silver! But that’s only one version of how this town was born. Another has it that William Talcott made the strike while hauling wood out of Pony Canyon.

The resulting boom drew 10,000 people and lasted until the mines played out in the 1880s.

Whatever the truth, both stories live on in this central Nevada community, home to fewer than 200 hearty souls. “We’re in the Toiyabe Mountains at 6,600 feet and small,” says Candace Kelly, office coordinator for the chamber of commerce. “Our school system has seven full-time children, but we’re friendly and have lots of history.”

Three of Austin’s churches are among the West’s oldest. St. George’s Episcopal was built in 1878 and is still in use. The 1866 Methodist Church serves as Austin’s town hall.

St. Augustine’s Catholic Church, built of native brick and stone, held its first mass on Christmas Eve 1866, and the priest charged $1 admission to limit the crowd. The building, one of 11 on the National Register of Historic Places, is being restored as a cultural center.

With its church spires reaching to the sky, the so-called City of Churches is great for picture-taking, and walkers love the authenticity of an old mining outpost.

Other buildings on the Register include the 1871 courthouse and Nevada’s oldest bank building, built in 1863 and now the town library.

Stop at Jason’s Art Gallery to buy striking samples of Nevada turquoise. The International Café & Bar began as a hotel in Virginia City, built in 1859. Parts of it were moved to Austin in 1863 and it’s still there, serving food and drinks in                     an historic atmosphere.

Over July 4th weekend, the town holds a parade and barbecue, and in September folks love the Prospector’s Dream Wine Walk and Sunset Dinner.

In exchange for buying a ticket, participants get a wineglass, and accompanied by live music, walk down Main Street where business owners pour them a drink. That evening, the group—some 150 people—gather at Stokes Castle for dinner.

“The setting overlooks the Reese River Valley at sunset and is so beautiful,” says Kelly.

Mine owner Anson Stokes built the castle in 1897. Visitors can’t go inside, but the three-story structure, modeled after a Medieval tower Stokes saw near Rome, is well worth a look.

At the county building, get a map of original Pony Express stations along Highway 50, which runs through town. Life magazine in 1986 dubbed it the “ Loneliest Highway in America.”

The Cold Springs and Sand Springs stations are now rock ruins, but historical markers tell the story of the lonely outposts. At Sand Springs: “A few rough poles stuck in the sand and covered with cloth. Several holes have been shoveled out of the sand. These are the springs. Warm and unwholesome.”—William C. Moss, August 22, 1861.

The endless open country around town offers bountiful outdoor fun. Spencer Hot Springs has pools to soothe your weary bones. Set between the Toiyabe and Toquima ranges, likely snow-covered in winter, the views are tremendous as you drop into steaming, 140-degree water and say, “Ahhh!”

At Toquima Caves, hike a short trail up stone steps to an array of yellow, black and white pictographs, painted by ancient Shoshones. If the weather’s right, drive the gravel road through Kingston Canyon, 30 miles away, to see scenery alive with wildlife.

Fun Fact: In 1868, Austin authorities hanged murderer Rufus Anderson three times. On the first two tries, he fell through the trap and thudded to the ground, alive. As horrified onlookers protested, Rufus was roped to a chair and hanged sitting down.

Stop at the chamber for a Highway 50 Survival Kit, a booklet about the road. After the chamber stamps it, mail the book to the Nevada Commission on Tourism, which will send back a certificate stating, “I survived the loneliest highway in America.” Says Kelly: “We just had people from the Netherlands come in a second time. Europeans especially are fascinated by the vastness of the Nevada landscape.”

Reuel Gridley became famous in 1864 for losing a bet that forced him to carry a 50-pound sack of flour down Main Street. To raise money for Civil War veterans, the sack was auctioned off many times around the West, accumulating $275,000. Mark Twain told Gridley’s story in Roughing It. The store, built in 1863 and on the National Register, is closed to the public.

Twenty-four miles from Austin off Highway 50, see remarkable rock carvings dating to 10,000 B.C. At the overlook, watch for wild burros roaming the valley.

For a drink amid endless sagebrush in Kingston, visit this saloon, named Best Bar in the Middle of Nowhere by Men’s Health magazine. The views from every barstool go on forever.