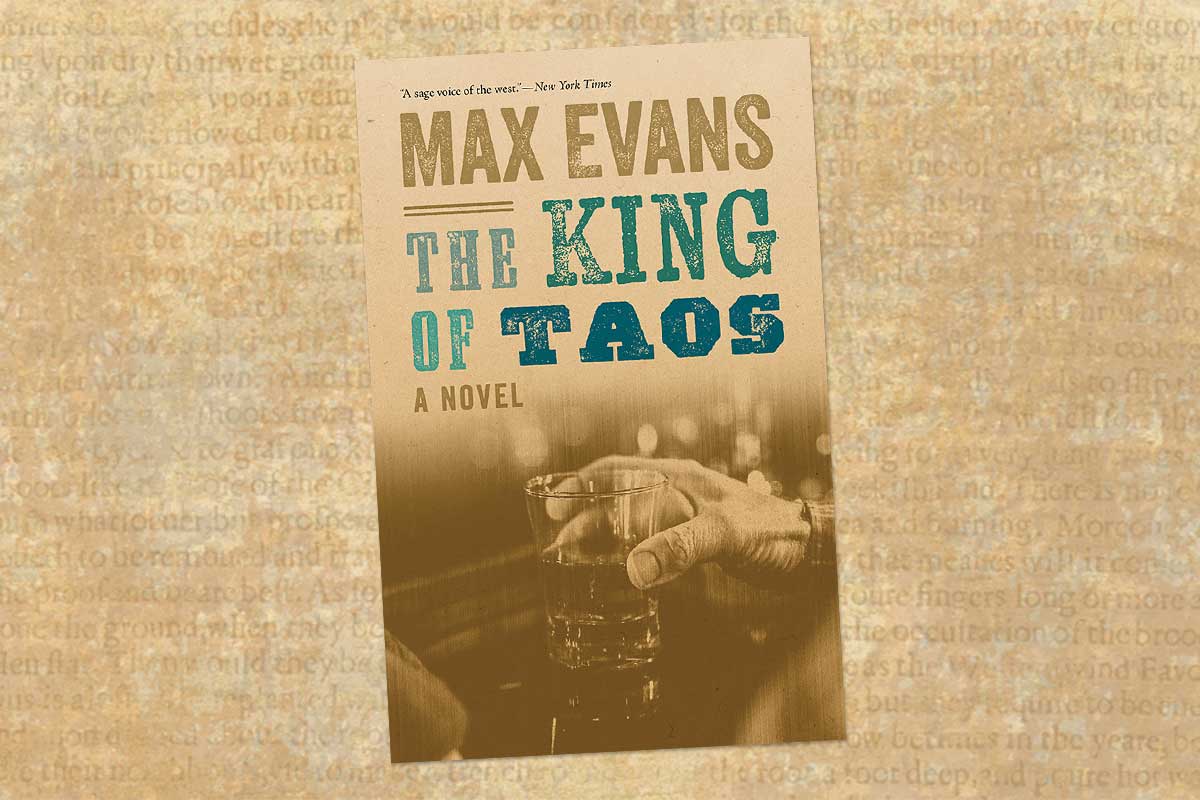 Max Evans, a mentor, close friend and hero of mine, lived long enough to see his final novel The King of Taos: A Novel (University of New Mexico Press, $24.95) published, but unfortunately two weeks later he suffered a fall at home and died on August 26, 2020, three days before his 96th birthday. Max, who had turned back to painting more than once, had sworn to me he was done writing. But for years he had spoken passionately about his long-lost manuscript The King of Taos, and was thrilled to see it published and in print. In my opinion, Evans was an author akin to James Joyce, John Steinbeck and J.P.S. Brown. Max wrote about the men and women and the land of northern New Mexico he dubbed “Hi-Lo Country.” The King of Taos was his last to revisit the Hi-Lo and his life experiences as a struggling artist and writer among the many personalities who made Taos their home in the first decade after World War II. Max recalled in his author’s note: “Amid a few world-remembered artists and those wishing to be so existed a small group of people who came together for a while, bonded by their mutual love of wine and talk…. I couldn’t help but observe them from my upper-story studio window. I became fascinated with their easy camaraderie and generosity with bottles of cheap wine. I knew there was a story here that I had to tell in fiction so I could get nearer the fun of it all.”

King of Taos is Evans’s 18th book published by the University of New Mexico Press and joins The Rounders, For Love of a Horse, War and Music: A Medley of Love and Faraway Blue as the fifth volume in the university press’s recently issued Max Evans Library. In 2018, Max called me elated that his novels were being reissued by his favorite press, and that the King of Taos manuscript might finally be published, although he knew it would take great efforts by many—and even a spiritual intervention of great magnitude—to make it happen. I believe anyone who reads King of Taos and savors Evans’s writing, will not only be inspired, but have their own personal spiritual awakening through Max’s prose and the fictional-life experiences of his characters, especially through the novel’s semi-autobiographical character Zacharias Chacon.

“Zacharias, the untitled leader of the band-of-brother imbibers, paved the way,” Max says, “without a bulldozer, for my gaining membership and acceptance to live in some reality that led to his creation.”

Evans, who was a World War II veteran of the Omaha Beach landings, Normandy Campaign and the Battle of the Bulge, lived a very adventurous and colorful life as a cowboy, miner, roper, artist, author, screenwriter, actor, filmmaker, husband and father. Born in Ropes, Texas, the Western Writers of America Hall of Fame member lived most of his life in New Mexico, including as a member of the Taos Artist community, where he met his wife, Pat, the daughter of a Taos trader. Evans is survived by his wife of 71 years, and his twin daughters Charlotte and Sheryl. While he has now moved on after a thousand years to what he called “The Great Mystery in the Sky,” we are fortunate to have one last memorable Hi-Lo adventure in prose from Max, who would remind us all “to have fun, and keep spurrin’!”

In August 1876, Texas settlers were accustomed to raids from Indians, outlaws depredating upon livestock, danger from ruffians of all sorts and vigilante actions taking the place of an effective court system. But worse than those tragic events, the assault on the England family in Montague County shocked everyone. Rev. William England, wife, Selena, and stepchildren Isaiah and Susie were all murdered in their home. Why? No one could provide an answer.

Men were arrested, charged and tried. Guilt was established on the deathbed statement of Selena England. The hangman’s noose was ready and justice would be served. But then the death sentence was commuted to life. Glen Sample Ely’s Murder in Montague: Frontier Justice and Retribution in Texas (University of Oklahoma Press, $21.95) is a compelling story of frontier justice at its best.

In a debut novel, All Things Left Wild (Blackstone Publishing, $27.99), set in the early 20th century, James Wade offers a bloody tale on separate tracks, two journeys triggered by the Bentley brothers’ misguided and tragic robbery and a murder. Shelby and Caleb Bentley calamitously, out of shame and dumb inspiration, botch a robbery that kills the young son of an Arizona gentleman-rancher, Randall Dawson. One brother, Caleb, is wiser and braver…inspired to seek redemption through deeds of daring and deeds of love. The brothers are trailed by good-hearted, semi-incompetent Randall Dawson…seeking vengeance…if only, at first, to prove his manhood. Written with elegant prose that might remind a reader of Cormac McCarthy, Wade’s novel announces the coming of an astonishing young talent, a fictioneer for the Western genre’s best future.

Art T. Burton, best known for his authoritative studies on lawman Bass Reeves and other black frontiersmen, provides an insightful look at Crawford Goldsby, the part-black, part-Indian outlaw of the 1890s—better known as Cherokee Bill—who was hanged in Fort Smith, Arkansas, in 1896. In Cherokee Bill: Black Cowboy—Indian Outlaw (Eakin Press, $17.95), Burton does what he does best: sift through myriad legends to find the facts. “I came not here to talk but to die,” Goldsby said on the gallows. “Proceed with the killing business.” Cherokee Bill’s story is filled with romance, violence, murder, revenge and an all-star cast of historical figures, including Reeves, Ned Christie, Henry Starr and Judge Isaac Parker.

Living To Tell The Tale

They robbed a record-breaking six trains and 80 banks before being caught in 1924, but the Newton Gang hasn’t grabbed the American imagination like the Dalton or James gangs. Now, prolific Western author W.C. Jameson aims to rectify that with The Last Train Robber: The Life and Times of Willis Newton (Rowman & Littlefield, $24.95). James takes us through the life of gang leader Willis, from his boyhood start in crime in central Texas to his death, in 1979, at the age of 90. “He was daring, bold, brash, and colorful,” Jameson writes. Unlike so many of his contemporaries, Willis lived to tell the tale. And Jameson brings us that tale in an authoritative, well-researched book about the last of the old-time outlaws.

—Max McCoy, author of Elevations: A Personal Exploration of the Arkansas River