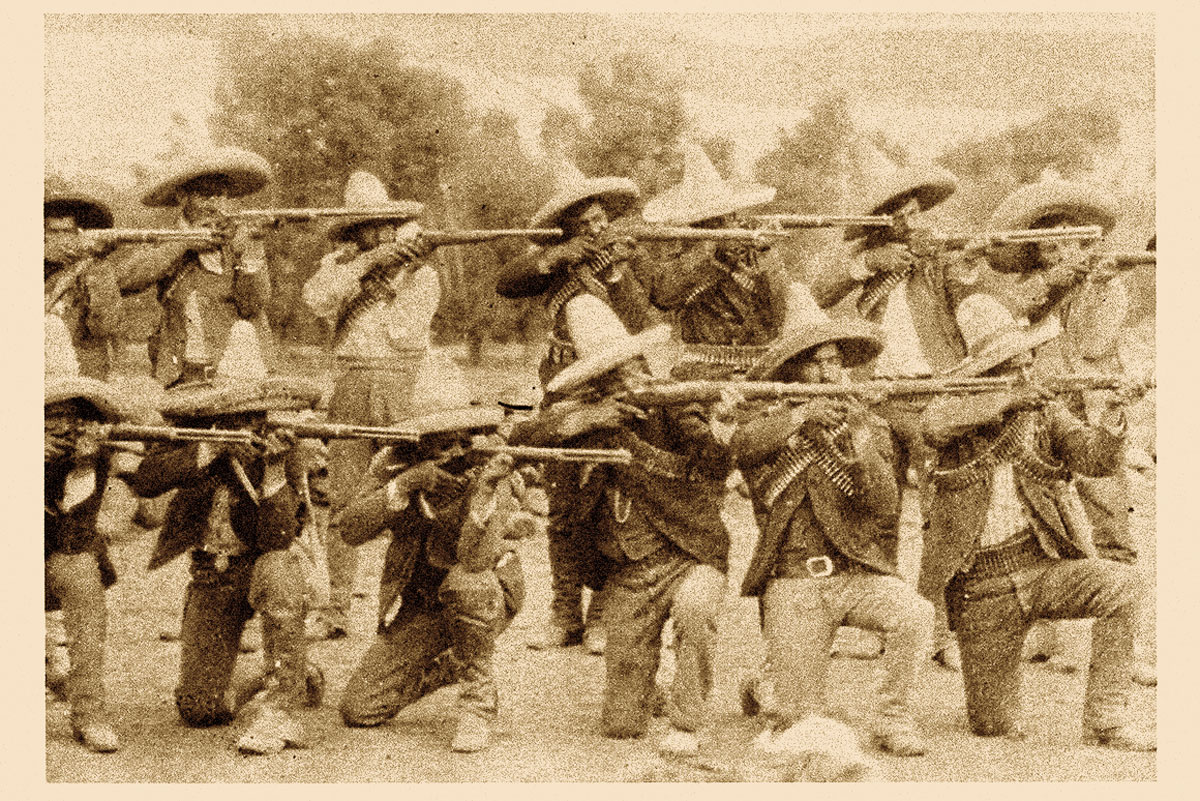 Whether they served with Pancho Villa in the north, Emiliano Zapata in the south, or any number of guerilla bands, the men, women and children who fought against oppression in Mexico’s 1910 Revolution armed themselves with almost any firearm they could lay their hands on. The citizen freedom fighters—vaqueros, farmers, city workers and rural peones—fought the Mexican Federal Army and the United States Army during the Punitive Expedition of 1916. As guerilla leader Emiliano Zapata told an elderly volunteer in 1913, who was armed with only a crude, homemade shotgun, “If it shoots, it’s welcome in the Revolution.”

Backed by Diaz’s corrupt government, the Mexican Federal Army was well equipped by Germany, which showed great interest in Mexico at the time, and armed them mostly with 7mm Model 1895 Mauser, bolt-action rifles. Various Mexican regimes purchased Model 1902 and 1912 Mausers and some Japanese 7mm Arisaka rifles. The Federales also imported a number of semi-auto, 7x57mm Mondragón rifles, designed in Mexico, but mostly manufactured in Switzerland (later, in 1908 Mexico). Many of these federal arms eventually made their way to the Revolucionarios, who relied almost entirely on captured or privately purchased arms.

Ammunition for handguns ranged from the smallest .22 rimfires, .32 S&W and .38 Short, to the beefy American frontier-era rifle/revolver loads like .38-40, .44-40 and .45 Colt, loaded in such six-guns as 1873 Colt single actions and their later double actions. Colt Bisleys (said to be a personal favorite of Pancho Villa), Remingtons, S&Ws, Merwin Hulberts and others were also heavily used. For shoulder arms, besides captured Mausers, the most popular arms of the mounted rebel vaqueros were the slab-sided, lightweight and saddle-friendly 1873 and 1892 Winchesters, along with various models of like-chambered Marlins. These arms would preferably carry the .38-40 and .44-40 rounds. Later models, like Winchester’s 1894 models, were especially favored in the .30 WCF. That company’s 1895 model would likely be stoked with .30-40 Krag, and .30-06 Springfield. Any arm produced up through the time of the revolt could have been used.

Bolt-action rifles carried high-powered military smokeless rifle ammunition, including the 7x57mm Mauser, .30-06 Springfield and .30-40 Krag. Even hunting rifle rounds that were scrounged up saw use, including the popular .38-56 Winchester, designed for the 1886 Winchester lever action and employed in the 1895 Marlin lever gun, as well as the various .40, .45 and .50 caliber loads produced for such sporting arms. Other old, but still deadly calibers, including the all-but-obsolete black powder .45-70 Government load, which could be used in 1881 Marlins and 1886 Winchesters, surplus 1873 Springfield “trapdoors” and the like would not be turned away. Except for the .30-30 round, which the revolutionists usually seemed to be able to get lots of, obtaining quantities of other types of sporting ammo was difficult.

Another breed of firearm used in the Revolucion, including Villa’s 1916 raid on Columbus, New Mexico, was the single-shot Remington Rolling Block rifle. Mexico’s government Rurales mounted police carried M-1897 Remington Rolling Block carbines in 7.92mm Mauser chambering, and a number of these carabinas, were “repatriated” by the rebels.

The Revolucionarios rose from a small band of ill-equipped vaqueros, working class townspeople and rural peasants, to become a formidable and victorious fighting force that lived off the land, gathered what weapons they could and eluded their enemies with regularity, while waging war to the cries of Viva Villa!, Viva Zapata and Viva la Revolucion!