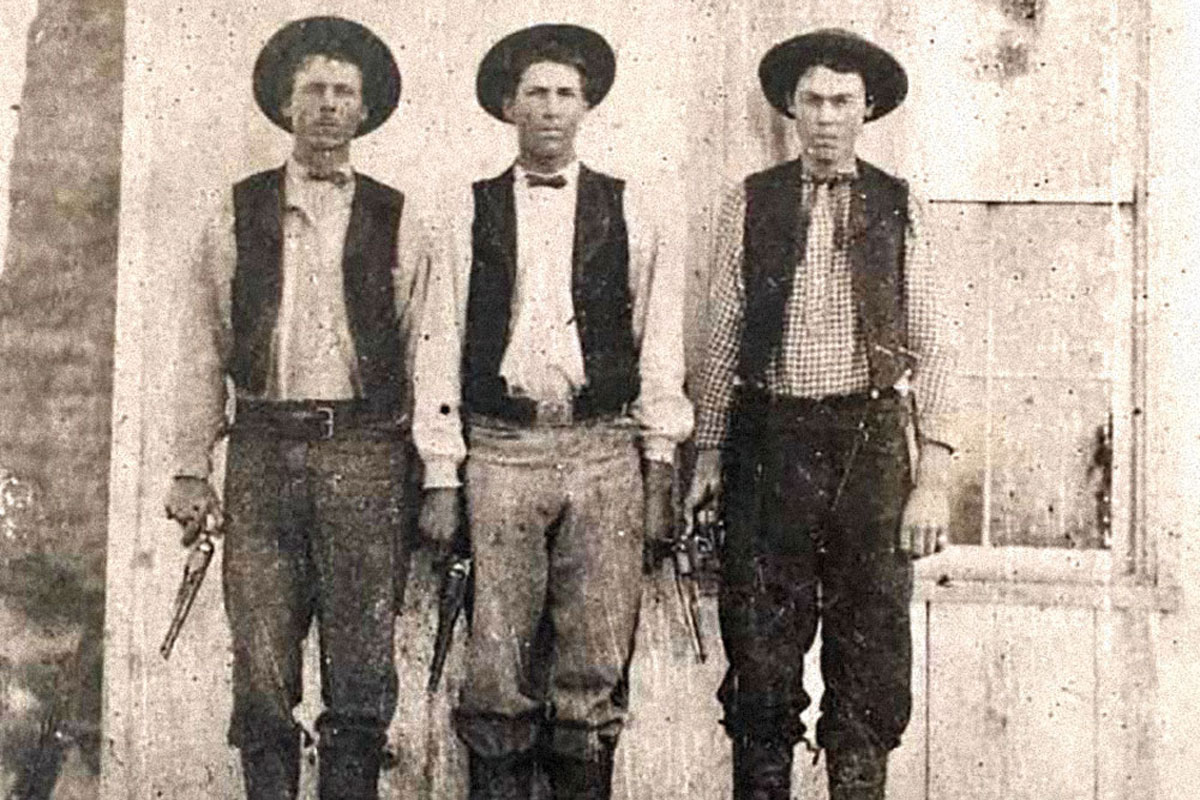 Although the percussion ignition system, often called “cap and ball,” only reigned for about 45 years (roughly 1820-1865—the shortest lifespan of any firearms ignition system), this period has captured the imaginations of gun fans worldwide. In America alone it was the opening of our Western frontier, the era of the fur trappers, the California Gold Rush, The Mexican War, the struggle for Texas’s independence and the fight at the Alamo. Pre-Civil War conflicts in “Bloody Kansas,” and Missouri and the Civil War, all happened during the caplock’s heyday. The rest of the world, too, saw powerful European nations exploring and colonizing much of the globe with stirring events like India’s Sepoy Mutiny, The Crimean War, the exploration of Africa and many other of dramatic history-changing events.

While myriad styles of weaponry were utilized in these undertakings, the advent of the practical revolver is arguably the most appealing to today’s shooters. The era of the percussion system was also a time of great change—the age of the industrial revolution, the beginning of mass production and interchangeable parts. Of importance to firearms fans, it signaled the arrival of the repeating pistol, changing the way men fought, and often serving, as the old saying goes, as the great equalizer.

Today’s European-made, replica cap and ball revolvers stir the memories of those deeds and misdeeds back to life through historical re-enactments, competition shoots and other venues that feature the epic events and the people who played a part in them. The modern black powder handgun enthusiast has more choices for obtaining a working replica of these legendary smoke wagons than at any time since their introduction. Here’s a sampling of some of them, and where one might view an original example of the historic guns. Check out our Suppliers sidebar, and contact them to see what models each importer offers.

This is the pistol that revolutionized revolvers. The unique design, with a cylinder that revolved, rather than the barrel, as in some earlier revolving handgun attempts, made it a practical repeating handgun when compared to other pistols of the era. Patented in 1836, this five-shot handgun got off to a slow start, despite making quite a reputation for itself, especially in the fledgling Republic of Texas, fighting the Comanches. However, the lack of sales caused inventor Samuel Colt to close down his Patent Arms Manufacturing Co. Nonetheless, the Paterson proved its mettle, not only on the Texas frontier, but in the swamps of Florida, during the Second Seminole War. Although only around 3,200 Patersons left the factory, they paved the way for all future revolvers. Loading and firing a Paterson revolver offers the experience of shooting the first practical revolver in history. Examples of an original Paterson may be viewed at the Autry Museum of the American West in Los Angeles, California, and Texas Patersons are on display at the Texas Ranger Hall of Fame & Museum, in Waco, Texas; the National Cowboy & Western Heritage Museum, Oklahoma City, Oklahoma; and the Cody Firearms Museum, in Cody, Wyoming.

In the midst of the U.S.’ war with Mexico, former Texas Ranger Sam Walker, serving with the U.S. Mounted Rifles, sought help from Samuel Colt in hopes of obtaining an improved and more powerful revolver for his men fighting in Mexico. The result was the Walker model, and despite only 1,100 of these massive, four-pound, nine-ounce (unloaded) six-shooters being produced, this iconic six-gun’s power, accuracy and great range helped spread the word of Col. Colt’s “repeating pistols,” and put him back in the gun business. The .44 caliber Walker, sometimes referred to as the “Victorian Magnum,” remained the most powerful commercially produced revolver until the introduction of the .357 Magnum, in 1935. Improvements on the Walker, like shortening the barrel from nine to 7½ inches, and adding a loading lever catch, led to more orders worldwide. Three different further improved “Dragoon” models were produced over the next 14 years with an estimated 19,700 of the 1st, 2nd, and 3rd Models turned out. To view an original military Colt Walker, and various Dragoon Colts, visit the Cody Firearms Museum, the Texas Ranger Museum, and the Panhandle Plains Museum in Canyon, Texas.

Undoubtedly the most famous cap and ball revolver of all, it could easily be called the “Percussion Peacemaker.” From the moment this Colt was introduced in 1850, the handsome .36 caliber was sought after by those hardy adventurers who needed a reliable holster-sized six-gun. From the gold country of California, throughout the West, and across the globe, it became a favorite with adventurous American and European soldiers and explorers. The ‘51 Navy made its mark as the best balanced six-shooter of its time. Favored by cavalrymen on both sides of the Civil War, the Navy Colt was also packed by famed frontiersmen John Wesley Hardin, the James Younger Gang, the Pawnee scouts and none other than the “Prince of Pistoleers,” James Butler “Wild Bill” Hickok. With nearly a quarter of a million produced until 1873, the 1851 Navy did more to make the West wild than any other six-shooter of its time. You can see one of Wild Bill’s Navy Colts at the Autry Museum of the American West, in Los Angeles, and another of Hickok’s Colts at Cody, Wyoming’s Buffalo Bill Center of the West.

Fully 127,156 of the 1860 Army model were sold to the U.S. Government during the Civil War, making it the major revolver in use by the Union forces during our nation’s bloodiest conflict. From 1860-1873, the.44 caliber six-gun was produced in both military and civilian models, with round or full-fluted cylinders, combining much of the power of the earlier dragoons, but boasting improved ballistics, better balance and a lighter two-pound, 11-ounce weight. The 1860’s streamlined styling of rounded contours and eight-inch round barrel represented a distinct departure from the squared-edge profiles of Colt’s earlier models, and the older model’s hinged loading lever was replaced with the improved, so-called “creeping” (rack and pinion-style) lever. After the Civil War, the 1860 went on to serve for several years on the frontier, and was used by the Texas Rangers, Wells Fargo detective James Hume, Mormon “Avenging Angel” Porter Rockwell and many other Westerners. Original ’60 Army Colts are on display at the National Firearms Museum in Fairfax, Virginia; Cody Firearms Museum; at the National Cowboy & Western Heritage Museum.

Colt’s 1860 Army’s stiffest competition came from the Remington Army .44, with around 106,000 purchased by the U.S. Government. It was rated among the best six-guns of its time. Remington’s top-strap frame was a popular feature, and aided in keeping exploded caps from falling into its inner workings, reducing the chance of jamming. Now commonly known as the “1858 Remington,” it was prized by troopers on both sides during our War Between the States. After hostilities between the North and South ceased, the Remington went west to see use by the famed 10th Cavalry “Buffalo Soldiers,” Lt. Col. George Armstrong Custer and Buffalo Bill Cody, who said of his Remington Army, “It never failed me!” The Remington’s reputation was such that 122,000 guns were made from 1863-1875. Additionally, up through 1878, about 28,000 of the .36-bore Remington Navy Models were also produced. Many of each model saw extensive use, especially on the frontier. Original Remingtons are displayed at the Cody Firearms Museum, the National Firearms Museum and the J.M. Davis Firearms Museum in Claremore, Oklahoma.

While Rebel revolvers are often considered as brass-framed clones of the Colt cap and ball six-guns, only a couple of southern companies—Griswold & Gunnison and Schneider & Glassick—made brass-framed Colt lookalikes. What these “Johnny Reb” pistols do have in common are subtle changes from the models they copied, largely due to time, raw material and other economic factors. Guns like the brass-framed Spiller & Burr (a Whitney copy) and the iron-framed guns, including revolvers like the Navy Colt-like Leech & Rigdon, the Colt Dragoon-sized and Navy-sized clones produced by the Dance Brothers of Texas, and Georgia’s Columbus Firearms Manufacturing Company Colt copies, are good examples. A number of secessionists’ arms were imported from England, like the Kerr revolver, and from Europe, including the French Le Mat. Regardless of origin, these Confederate revolvers helped keep Union forces at bay for four years of bloody fighting. Several original Confederate revolvers are on display at the American Civil War Museum, in Richmond, Virginia; the Cody Firearms Museum; and the Panhandle Plains Museum.

Currently, only a few replicas of southern wheel guns are offered. Framed in yellow brass are the 1851 Navy Colt-style, Griswold & Gunnison replica, and the Spiller & Burr copy of the Whitney. Available in steel frames are Texas’s Dance & Brothers’ .36 caliber model, The Leech & Rigdon .36, and the all-blued Le Mat, with its nine-shot, .44-bore cylinder, and the .65 caliber (20 gauge) under-barrel. Interestingly, some outfits offer brass-framed copies of Remington Armies and smaller pocket-type arms, as “Rebel” revolvers, although no such Confederate copies have ever come to light. However, they do tend to have that “Johnny Reb” look about them.

Due to the fortunes of war, only a small number of Confederate revolvers saw service. Many southern arsenals and arms factories quickly fell into the hands of Yankee troops, but the arms that did manage to make their way to Southern soldiers saw their fair share of combat, and today, original Rebel arms of any kind command extremely high prices, due to their scarcity.

For today’s shooter who see themselves as perhaps a gambling gent, or maybe a Pinkerton agent, a number of percussion pocket pistols are available. Historically, these vest pocket cap and ball guns, small as they were, often made the difference between life and death in locales like San Francisco’s Barbary Coast or the treacherous Natchez Trace in the Mississippi River country.

Besides the frontier, America’s cities were ripe with crime, and the public was looking for a quality, accurate pocket-sized defensive firearm. By eliminating many of the steps necessary in producing his big Dragoon revolvers, Samuel Colt was able to create his first pocket revolver, known as the 1848 Baby Dragoon, a five-shot, .31 caliber pistol, but made without a loading lever (also called the “rammer”). From 1847-1850, Colt turned out about 15,000 of these pistols.

With the introduction of the 1849 Pocket Model, featuring the addition of a loading lever, and having a rounded trigger guard, this improved revolver quickly became popular with many Forty-Niners, including miners, gamblers, merchants and the sporting ladies. Incidentally, because the Wells Fargo stagecoach lines purchased some Baby Dragoons, along with ’49 Models without loading levers, modern-day gun collectors have dubbed such rammerless pocket pistols the “Wells Fargo Model.” This “five-shooter” became so popular—especially in the four-inch barrel length—that a full 340,000 guns were turned out before production ended in 1873, making it the most produced percussion firearm made by Colt.

Not to be outdone, Remington brought out its pocket version of the Army model. Their spur-trigger, .31 caliber five-shot model was manufactured from 1865-1873. With an estimated 25,000 turned out, Remington offered the gentleman—or lady—of the day, a pocket-sized revolver with its rugged top-strap frame. Several various pocket models, including the rare 1848 Baby Dragoon, are on display at the Panhandle Plains Museum, the National Firearms Museum and the Cody Firearms Museum.

Travel Back In Time

With such a selection of famous cap and ball revolvers, coupled with economic pricing, today’s leisure shooter, Cowboy Action competitor or re-enactor has a chance to obtain not only their favorite percussion revolver, but a number of them. Each model has its own distinctive feel, however they all shoot extremely well. Take it from someone who has enjoyed decades of shooting cap and ball revolvers, they’re affordable and fun. “Popping caps” with any of these historic revolvers offers a time travel, smoke-filled adventure.