Batter Up in Tombstone 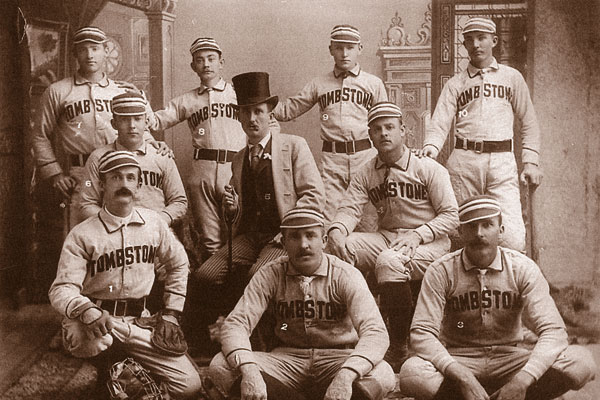 Everybody this side of Fenway Park knows that Tombstone, Arizona, is about keeping the past alive.

Yet the Town Too Tough To Die’s Nancy Lewis Sosa isn’t trying to stage another Gunfight Behind the O.K. Corral.

Sosa is the driving force behind a new youth baseball league in Tombstone, which hopes to open the season Memorial Day weekend with three teams (for kids ages 9-14) playing a round-robin schedule. Only this isn’t Little League, it’s Tombstone, and the kids will be playing in replica uniforms (from Connecticut-based K&P Weaver) of the Tombstone, Grand Central and San Pedro teams that were formed in the 1880s. They’ll also be playing with period bats (let’s hear it for wood over aluminum!) and balls. The only modern equipment will be cleats, catcher’s equipment, batting helmets and gloves.

“It’s going to be interesting,” Sosa says. “The bats are a little heavier, the balls a little softer. I asked the kids if they’d like to wear old-fashioned uniforms, showed them a picture of the team, and they all said, ‘Okay, fine. As long as we get to play.’”

Baseball is as Western as Wyatt Earp. Or, at least, Wild Bill Hickok.

Legend in Kansas City has it that Hickok once umpired a game between a KC team and Atchison (some accounts put the teams as rival fire departments). Kansas City won, 48-28—and you think the Texas Rangers’ pitching staff stinks! —and nobody argued with Hickok’s calls.

Certainly baseball was around. An 1868 letter from Mark Townsend Post describes a July 4 game at Fort Harker, Kansas. Post blamed his team’s 19-18 loss on the first baseman. Must have been Bill Buckner, that 1986 World Series goat.

Anyway, after that bench-clearing brawl at the O.K. Corral, Tombstone needed new entertainment, so George Staples Rice, a civil engineer from Massachusetts (at least he wasn’t a New York Yankees fan), started a baseball team at the Boston Mill in 1882, and the San Pedro Boys were born. Rice quickly sold Tombstone officials on the sport, and in May the Tombstone Base Ball Association was born.

“It grew from there,” Sosa says. “The Tombstone team developed, Grand Central developed, Bisbee created a team. They all played each other around the county, but it was more than just three local teams.”

Pima County met Cochise County for bragging rights in Tucson in 1882. Tucson won handily, which is probably the real reason Wyatt Earp killed Frank Stilwell in Tucson. Well, maybe not, since Stilwell was struck out before Tucson “whitewashed” Tombstone. Leading citizens comprised Tombstone’s team. They weren’t thugs. The thugs were in Kansas City, where in 1886 Cowboys player-manager Dave Rowe reportedly shot catcher Fatty Briody in midseason. The National League kicked the Cowboys out after the season, allegedly citing “hooliganism.”

Fatty, of course, would have done well in Silver City, New Mexico, in 1887, when the Fat Fellows, whose uniforms pictured beer mugs and whose players averaged better than 200 pounds, put their weight into a 20-6 victory over the slimmer Slim Jims.

In Tombstone, in 2009, you can expect to see less rowdy play and slimmer youngsters learning America’s pastime, doing things Tombstone’s way, the only way things are done in Tombstone.