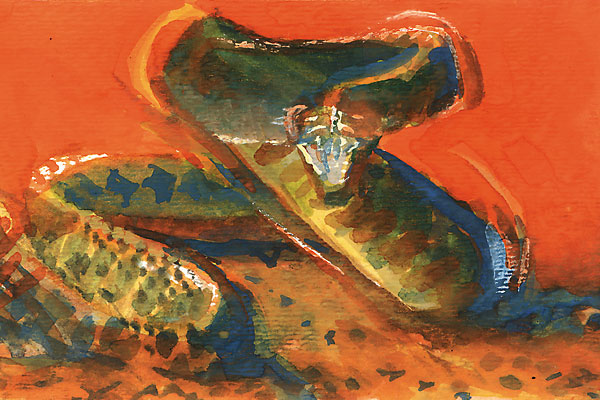 “The first thing…should be to draw a cord tightly around the leg or arm…a short distance above the place bitten….Internally, give the patient all the Whisky he can drink….

“… You may fill him with Whisky, then let him swim in it, and it will not make him drunk, so long as the poison of the snake remains in the system. This is about the only thing that Whisky is really good for,” stated Gunn’s New Family Physician, dated 1867,

“A great many remedies have been lauded as curative, but carefully conducted experiments have proved them all to be worthless….Tie off the blood circulation as shown on chart of veins and arteries,” reported Domestic Medical Practice in 1921.

“Do not give alcoholic beverages or stimulants; do not apply ice; do not apply a tourniquet…give 5-10 vials of polyvalent crotalid antivenin [if pit viper] by slow intravenous drip in 250-500 ml saline,” recommended  Current Medical Diagnosis and Treatment in 2001.

The three preceding paragraphs encapsulate the wisdom of nearly one and a half centuries of medical progress in tackling one of the most feared misfortunes to befall the unlucky pioneer in the Old West, namely, the poisonous snakebite.

According to a study published in the 2002 New England Journal of Medicine, every state except Maine, Alaska and Hawaii is home to at least one of the 20 poisonous snakes native to the United States. Of the two families of venomous snakes, the most common is the pit viper (family Viperidae, sub-family Crotalidae) that includes rattlesnakes, copperheads and cottonmouths (water moccasins). The other family is the Elapidae that includes coral snakes, found most often in the Southern states. The venom of the pit vipers causes the destruction of tissue and the breakdown of red blood cells with resulting bleeding, whereas the venom of coral snakes is neurotoxic, sometimes causing paralysis and respiratory failure.

The serpent enemies on the frontier were the pit vipers, usually rattlesnakes and copperheads, and, less often, water moccasins. In the Old West, the bite of the diamondback rattlesnake was the most feared of all. Not all snakebites resulted in the delivery of venom. Erring on the safe side, however, the victim, the helpful bystander and, if available, the frontier doc usually followed the protocol described by Dr. Gunn.

If the area bitten was on the extremity, a tight tourniquet was first applied above the wound. Next, the area over the fang marks was incised in an “X” pattern with a sharp (often unsterile) knife to allow for free bleeding. The wound was then “sucked” by mouth to remove as much of the poison as possible.

Innumerable remedies were next administered. Topical treatments included cauterization with a hot iron, a poultice of bread and milk softened with olive oil, onions mixed with salt and even tobacco juice. Internals (besides whiskey) included the drinking of saltpeter (potassium nitrate) in water, the drinking of vinegar and the administration of a botanical purge derived from the Mandrake or the American Mayapple plants.

If the dose of viper venom was clinically significant, the victim would often develop nausea, vomiting, dizziness, rapid heart rate, bleeding under the skin and tissue death. If the victim was a child or the bite was on the face or the abdomen, death could occur in as little as 30 minutes. Spared death by venom, survivors of the Gunn treatment often faced the more hazardous problem of infection, including tetanus that could also lead to a fatal outcome.

Modern poison control center statistics indicate that of the approximately 8,000 patients who sustain venomous snakebites in the U.S. each year, about five (0.06 percent) die. In the Old West, where effective treatment options were limited and the development of bite or treatment-related infection was more likely, the risk of death was probably much higher. Death, if it occurred, was probably delayed by days to weeks. Survival following venomous snakebite, however, then, like now, was most likely the rule.

None of these statistics would have really comforted the poor soul who sustained a rattlesnake bite in the Old West. I wonder how many died from sheer terror, after hearing that rattle and then feeling those fangs sink deeply into their flesh?