The Most Famous Rifle of the Old West 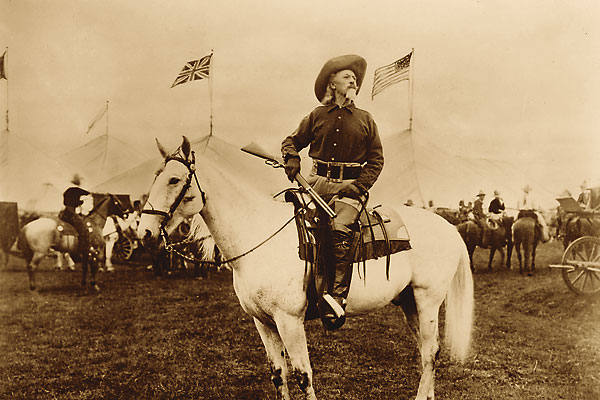 Thanks largely to its use on the American frontier, the slab-sided 1873 Winchester lever-action rifle has become an icon of the Wild West.

The 1873 Winchester outsold all its competitors and was the premier choice with gun savvy Westerners like the post-1874 Texas Rangers, Pat Garrett, Butch Cassidy, Belle Starr and Buffalo Bill Cody.

Introduced in 1873 in “.44 Winchester Central Fire” (.44-40—designed for this rifle), it was in fact the first centerfire arm for the New Haven, Connecticut, firm.

A year later, Winchester added the .38 WCF (.38-40) to its line, and in 1882, introduced the .32 WCF (.32-20) and the .22 rimfire. As with the .44-40, Colt and other revolver makers began producing handguns in these chamberings and when paired with a ’73 Winchester, these rifle and six-gun combinations quickly gained popularity, especially out West where ammunition was sometimes in short supply.

Winchester’s slab-sided design made it a natural for horsemen riding in the late 19th and early 20th centuries. While ’73s were sold worldwide, the Winchester was tested but never adopted by the U.S. Army, largely due to its less powerful cartridge (as opposed to the .45-70), economic restraints and the military’s policy against repeating arms. Yet a number of them were privately purchased by officers serving out West.

While certainly not the strongest action ever made in a lever-action rifle (although it was when introduced), the weapon was powerful enough for use against man. Its rapid-fire capabilities gave the user an edge over someone with a more powerful single-shot rifle. Too, its simple but effective toggle-and-link internal mechanism made for a fairly trouble free rifle that was adaptable for use in remote regions. It quickly became a favorite with peacekeeping organizations like the Texas Rangers. For hunting most Western game, the ’73 Winchester was well received by all, barring the buffalo hunters who generally favored the big-bore single-shot rifles.

The ’73 Winchester was standard in the 24-inch, octagonal-barreled rifle and 20-inch round-barreled carbine, although variations included round-barreled rifles, pistol-gripped stocks, engraved rifles and various barrel lengths. Of the versions available to the 19th-century shooter, the “One of One Thousand” models (little more than 100 made) were—and still are—most desirable. These rifles were fitted with barrels a bit more accurate than the average production tube, and featured extras such as set triggers, fancy wood and engraving, selling for $100 each. A slightly lesser-quality rifle, but still better than regular production, was designated “One of One Hundred” (only eight guns qualified for this title) and sold for $20 over the list price.

Finally, in 1923, after a production run of more than 720,000 guns, the old frontier favorite was phased out in favor of stronger designs capable of handling the more powerful and cleaner burning smokeless powder ammunition. Interestingly, 134 years after its introduction, some originals are still seeing use, thanks largely to cowboy action and cowboy mounted shooters. Import companies offer these shooters authentic Italian replicas of the ’73 Winchester—the rifle often called “The Gun That Won the West!”