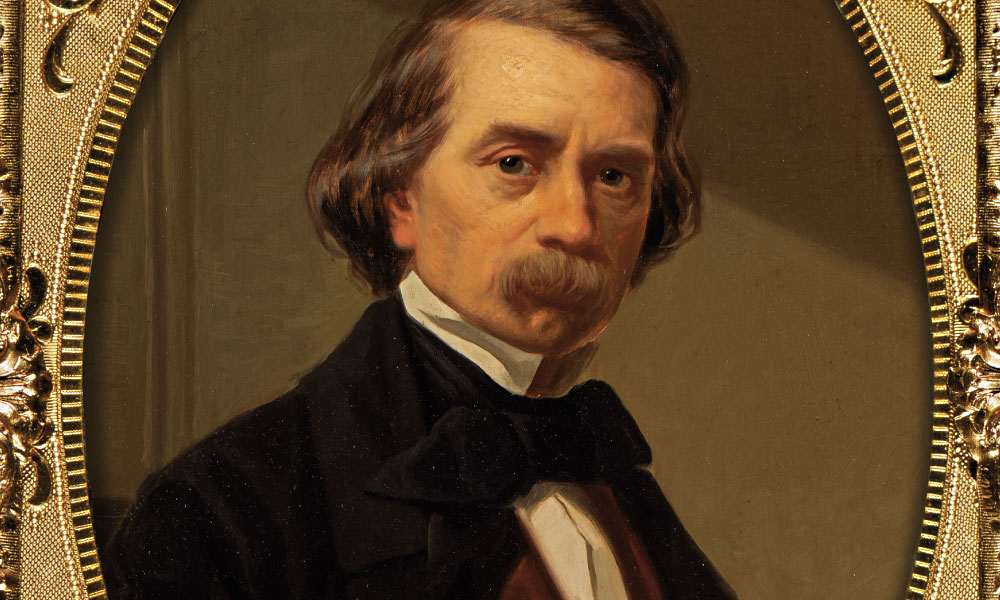 With an anthropologist’s curiosity, an artist’s hands and an explorer’s heart, Western painter John Mix Stanley personally offered a changing nation its last intimate look at the original peoples and unspoiled vistas of the American West.

John was born on January 17, 1814, in Canandaigua, New York, to Seth and Sally (McKinney) Stanley. The family lived in the Finger Lakes region, lands that had been part of the Iroquois homeland prior to European settlement.

John, orphaned by age 14 became an apprentice coach-maker and learned painting and sign-making. He moved to Detroit in 1832 at age 18, and earned his living as a painter of signs and portraits. In 1842, Stanley’s life and career would change when he went West to Fort Gibson in the Indian Territory (now Oklahoma), a crossroads for many of the original Indian nations, to begin prolifically recording the people, their culture and lands.

At the request of Arkansas Governor P.M. Butler, Stanley attended the Tahlequah Council, which drew 10,000 Indians from 17 tribes for a treaty of peace assembly with Texas. The event became the subject of Stanley’s most important work and earned the trust of his subjects.

By 1846, Stanley had produced 85 canvases which were exhibited in Louisville, Kentucky, and Cincinnati, Ohio, to great acclaim. When the Mexican-American War erupted, he was in Santa Fe, where he joined as an artist for Lt. William H. Emory’s engineering corps with the Gen. Stephen W. Kearny expedition to California. He documented Indian tribes and the land from Santa Fe to San Francisco for Emory’s official report.

After his service Stanley toured the Pacific Northwest in 1847 and was warned by friendly Nez Perce people about a band of marauding Cayuse Indians. Stanley knew the danger; he had just narrowly escaped from the Cayuse people. When they’d asked for his nationality, Stanley had responded by telling them he was a “Buckeye,” which they did not identify as American.

After traveling to Oregon from California, Stanley sailed to Hawaii in 1848, where he painted King Kamehameha III, Queen Kalama and the royal family. He returned to the East Coast with a portfolio of 200 paintings and innumerable sketches and etchings, and organized his work for public exhibition in several cities, including a major exhibition at the Smithsonian in Washington, D.C.

Upon his return a year later, at age 40, he married Alice C. English and eventually settled in Detroit. In 1865, much of Stanley’s artistic treasure was destroyed in the great Smithsonian fire, including his  hand-drawn maps and notes. In spite of his re-markable ability to paint scenes with photo realism, his life’s work was soon relegated to the background of 19th-century artists.

During the last years of his life, Stanley spent time in the studio painting and arranging for chromolithographs (early color printings) of his work. He died of heart failure in Detroit on April 10, 1872. His dream of Congressional compensation for his destroyed work was never realized.