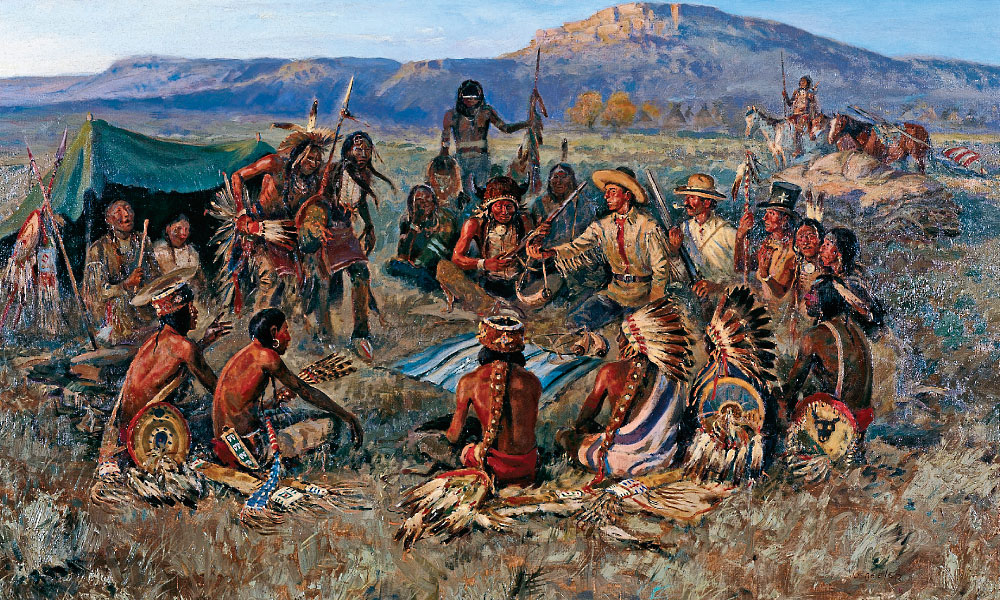 Fifty years after Joe Beeler, Charlie Dye, John Hampton and George Phippen met at the Oak Creek Tavern in Sedona, Arizona, and founded the Cowboy Artists of America, their followers are keeping that spirit alive.

On June 23, 1965, the four artists sat drinking beer while talking about cowboying and cowboy art. Beeler, Dye and Hampton had spent the previous fall in a cow camp down in Mexico.

In a sense, they were reincarnations of Charles M. Russell and Will James. In fact, James Peck, executive director of The Old Jail Art Center in Albany, Texas, says Dye’s “body of work suggests that Charlie Russell was a huge historical influence.”

So it was no surprise when, after the artists had sobered up and met again at Dye’s studio—Fred Harman made it to the gathering this time—to officially form the Cowboy Artists of America (CowboyArtistsofAmerica.com), the group’s objectives included: “To perpetuate the memory and culture of the Old West as typified by the late Frederic Remington, Charles Russell, and others….”

Another objective was an annual exhibition, and this year’s CAA Show and Sale is scheduled for October 8-10 at Oklahoma City’s National Cowboy & Western Heritage Museum.

Members—by invitation only—have come and gone. But the CAA remains highly regarded, with 20 active artists and a who’s-who of emeritus members including Fred Fellows, T.D. Kelsey and Howard Terpning.

They have one goal: “Get it right,” says Martin Grelle, known for his historical oils. That’s another objective: to ensure “authentic representations of the life of the West, as it was and is.”

“I couldn’t paint anything else,” Cox says. “This is what I know and love.”

Based in Santa Fe, New Mexico, Johnny D. Boggs has interviewed many Cowboy Artists of America members over the years for various magazines.