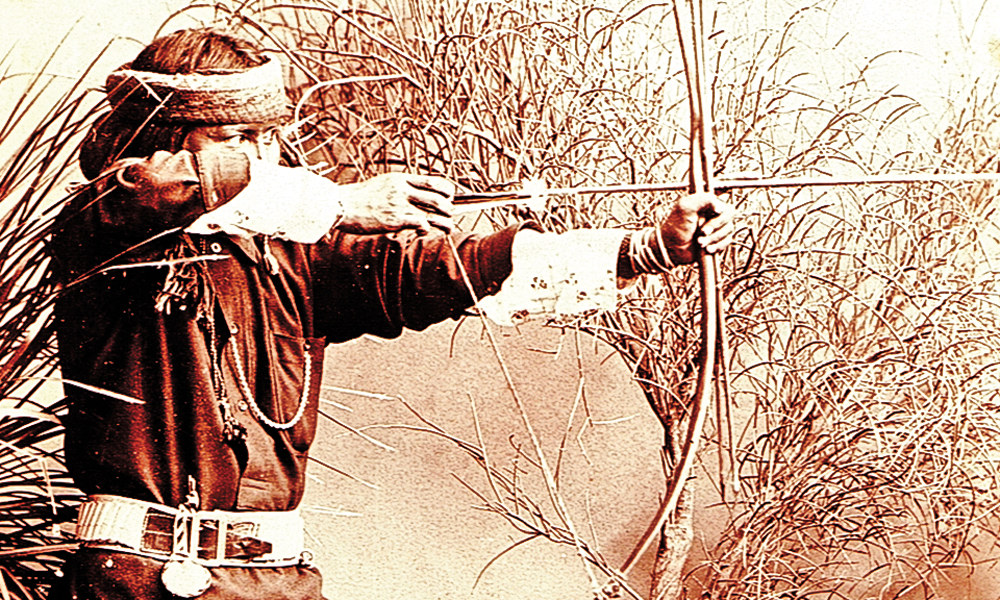 Silent, deadly and accurate at close range, the American Indian’s handmade bow was capable of rapid fire. Because the archer’s bow threw a projectile, it could easily be considered the predecessor to the gun. In the early days of the frontier, it was even superior to the settler’s firearms.

While the bow predates recorded history, some historians feel the weapon did not make its first appearance in North America until around AD 1000, when early Viking explorers introduced it to northeastern North America. Others believe indigenous peoples of the continent knew about the bow as early as 500 BC, although it reportedly began spreading from Alaska down through North America around 2000 BC. Regardless, by the time settlers made contact with frontier Indians, the bow had become a staple for hunting or war.

Up until the mid-19th century and the introduction of repeating firearms, the Indian’s bow was superior to the clumsy, often unreliable and slow loading muzzle-loading weapons of the Europeans. Lead for ammunition for guns could be difficult for Indians to obtain, while the bow’s ammunition—arrows—were literally growing on trees. Easy to make in large quantities, the bow offered rapid fire and reliability.

Artist George Catlin put it best when he wrote of his travels in the 1830s: “An Indian…mounted on a fleet and well-trained horse, with his bow in his hand, and his quiver slung on his back, containing an hundred arrows, of which he can throw fifteen or twenty in a minute, is a formidable and dangerous enemy.”

Indian bows were made in a variety of configurations, such as straight bows, or single or double recurve bows. As a rule, Indian bows ran about three feet in length, although they occasionally reached as long as five. Records show that their bows seldom exceeded what we know as a 60-pound pull, the necessary force to bring the bow to full draw.

Indians made their bows out of natural materials, generally of wood, such as cottonwood, willow, hickory, oak, ash, mesquite, birch, evergreen or any tree found in the Indian’s locale. Bows made from animal parts, such as deer antler, buffalo ribs or whalebone, were also common in certain regions.

Today’s collectors have narrowed Indian bows down to four main types. The first is the most common class of North American bow, the Self Bow, made of one piece of material, usually wood. Next is the rarely encountered Compound Bow, made of several pieces of wood bone or horn that are lashed together, similar to lamination, to form a solid bow. The third is the Sinew Backed Bow made from a brittle piece of wood and reinforced with cord or sinew wrapping. The last type is the Sinew Lined Bow, a self bow with its back strengthened by a sinew strip glued on the outside of the bow or, in certain regions, on both sides of the bow.

Early-day mountain men also made use of the bow. Well-known fur trapper James P. Beckwourth claimed he practiced with it extensively during the early 1820s and became proficient.

For the most part, the bow was exclusively a weapon for the Indians. As 1830s and early 1840s Southwestern traveler Josiah Gregg put it: “The arms of the wild Indians are chiefly the bow and arrows, with the use of which they become remarkably expert…at distances under fifty yards, with an accuracy equal to the rifle.”

Surely, many a frontiersman would have attested to that!