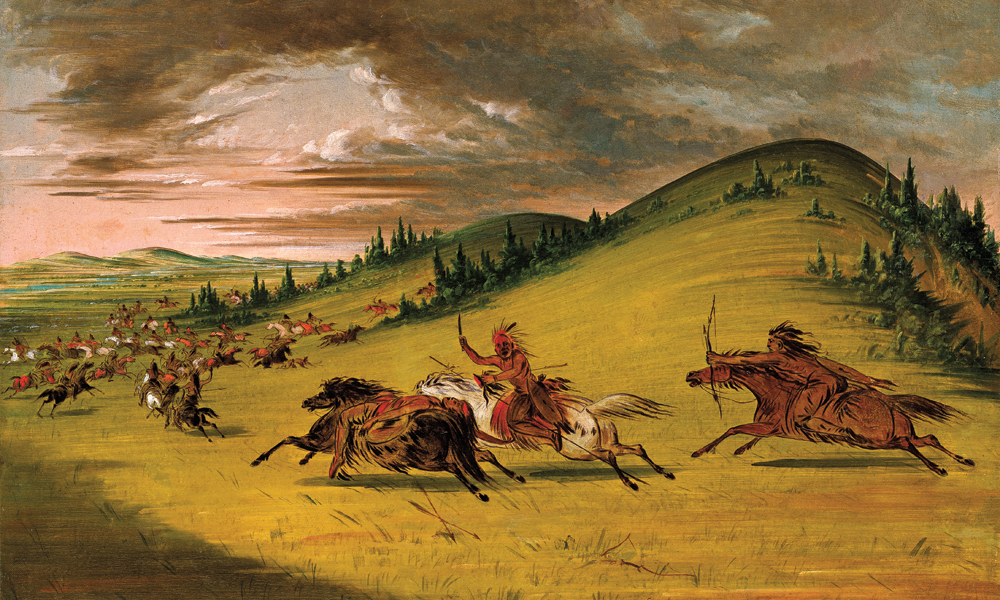 They came West for myriad reasons, integrating on the High Plains and in the Rocky Mountains, blending cultures as they met American Indians. Fur trappers and explorers would make their marks and leave their legends.

So would others—with paintbrushes, sketchbooks and imaginations. Those artists would not just live history, but document it, and they influenced later 19th-century artists—and 20th- and 21st-century masters, as well.

“They served as artist-explorers, ethnographers and historians on the Western American frontier,” says Tricia Loscher, chief curator at Western Spirit: Scottsdale’s Museum of the West, which titled an exhibition of contemporary artists inspired by early frontier artists “Confluence of Cultures in the American West.”

“The adventurer-artist that appeared during the last decades of the 18th century and the first half of the 19th century traveled solo, with a sponsor or corporate or government expeditions,” Loscher says.

These were artists like Alfred Jacob Miller, who in 1837 was hired by Scottish adventurer Captain William Drummond Stewart to furnish “visual souvenirs” of a trek to a mountain man rendezvous in the Rockies.

Those six months Miller spent out West fueled his imagination for his career.

“Miller’s sketches of the Indians and mountain men conveyed the adventure of the West that attracted Stewart,” says Sarah E. Boehme, curator at the Stark Museum of Art in Orange, Texas, “and that continues to inspire visitors and enthusiasts today.”

“Seeing his documentation of our people has importance to me as an artist and a Comanche,” says Nocona Burgess. “I always admired his regard and his way of thinking for the Plains people in a time when we weren’t regarded even as human beings. To me, his paintings of the Comanches in the 1830s were the beginning of the end for us. We were at that time at the height of our populations and the decline of our empire.”

Around that same period, Switzerland’s Karl Bodmer met Prince Alexander Philipp Maximilian while traveling in Germany. Seeking a draftsman, Maximilian hired Bodmer to join him on a trip to America. The two-year excursion produced portraits, landscapes and works of everyday Indian life. It’s the “single-most important visual and cultural narrative of the West made before the Civil War,” says Toby Jurovics, chief curator and Holland curator of American Western Art at the Joslyn Art Museum in Omaha, Nebraska.

“He captured the landscapes of the upper Missouri with a combination of topographic precision and lyricism that remains unparalleled; his portraiture, likewise, brings an immediacy and intimacy that can be haunting.”

These visual historians didn’t limit their documentation to U.S. lands. Boehme points to Paul Kane, who between 1845 and ’48,  journeyed across Canada from Toronto to the West Coast and back again, depicting Indians and landscapes in the provinces and territories.

“Kane traveled with fur trade brigades and stayed at forts established for the trade,” Boehme says. “His sketches in watercolor and oil documented scenes in a generally direct and straightforward manner; his large oil paintings show more evidence of studio conventions.”

“George Catlin’s images of Plains Indian life influenced Russell more than those of almost any other artist,” says Sarah Burt, chief curator at the C.M. Russell Museum in Great Falls, Montana. “The influence is unmistakable.”

“A thread that ties these artists together from the past and present is how their artwork can be read as documents which convey transformations and interpretations that occurred throughout time in the American West,” Loscher says. “The art speaks not only to the artists’ achievements as they were courageous and persevered among a multitude of challenges, but also their work tells us about the unique stories of the women and men of the American West who were, and continue to be, hardworking, resilient, optimistic and creative in their own way.”