Is This Doc Holliday? 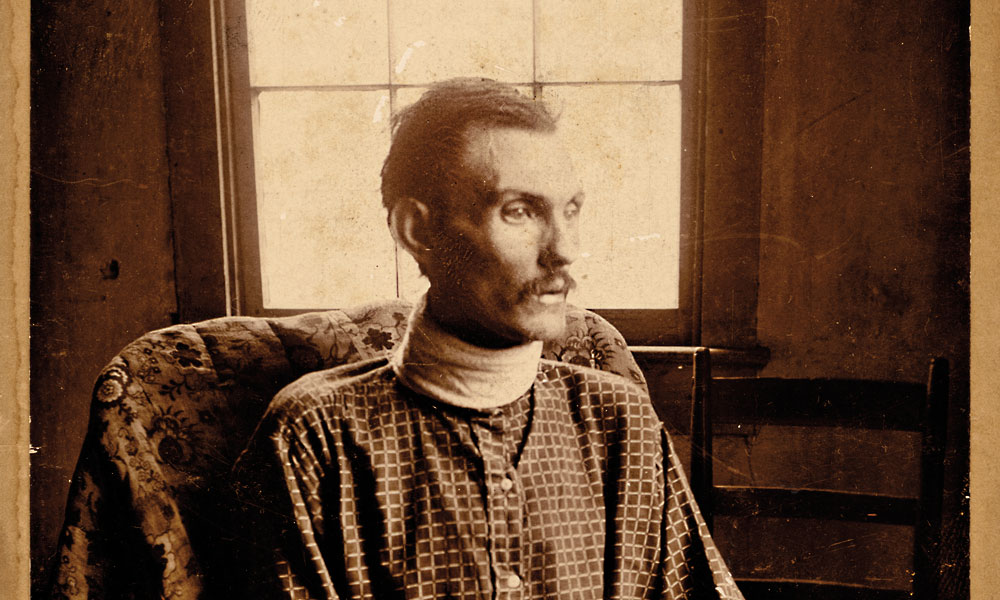 A man in his middle 30s sits in a pushchair, its wheels and his lap covered by a blanket. He is emaciated. His neck is wrapped to conceal infected lymph nodes. His hands are limp, and his eyes have the thousand-yard stare characteristic of late-stage tuberculosis.

Nothing in or about the photo itself suggests a date later than the mid-1880s. It was part of a large collection of 19th-century photographs purchased at an estate sale held at an elegant old home in Webster Groves, a suburb of St. Louis, Missouri.

Compare this image to one of young dentist John Henry Holliday, taken at the age of 20 for his 1872 graduation from the Pennsylvania College of Dental Surgery—one of two adult photos of him (the other is a signed photo of him taken in Prescott, Arizona, in 1879).

In both photos, notice the man’s sharply arched brows, the deep-set eyes, the jug ears. The noses are both straight, with a slight upward tilt at the tip. The cheekbones are wide and slightly depressed, relative to the lower jaws. The lengths of the jawlines are similar, as are the broad chins and the overall shapes of the faces. Those characteristics don’t change much with age and are used by modern facial recognition software to indicate a match between photos.

The older man’s mustache is more filled out, but not heavy. His hairline is equally high above a broad forehead, combed back instead of parted. Could this newfound photo be of Doc Holliday?

The honest answer is, we’ll never know, but this is how we would expect Holliday to look 15 years after his graduation from dental school and shortly before his death from tuberculosis.

Whether this is Holliday himself or some other poor soul dying of tuberculosis in the 1880s, perhaps this is how Holliday should be remembered: frail, but dignified; calm in the face of his death.

One last detail. Holliday was always careful about his clothing. The older man is wearing a soft cotton shirt, with sleeves that have been ironed to a knife-edge crease.