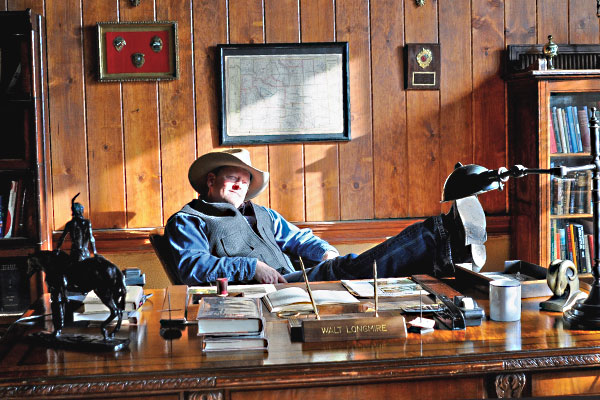 When the final episode of A&E’s Longmire, season three, came to a close, audiences were left with some tantalizing questions: Now that Walt Longmire (played by Robert Taylor) knows who killed his wife, how does he go on with his life?

Would Henry Standing Bear (Lou Diamond Phillips) ever get out from under the thumb of American Indian gangster Malachi Strand (Graham Greene)? Did Branch Connally (Bailey Chase) shoot his father Barlow (Gerald McRaney), or vice versa?  What fans did not wonder was whether Longmire would return to answer those questions. After all, it was the most successful drama series A&E had ever produced.

That’s why jaws dropped internationally when the series was abruptly cancelled in late August 2014.  The explanation was concise and insulting to the viewers: they were too old.

Zahn McClarnon, who plays Longmire’s frequent nemesis, Indian Officer Mathias, was told, “They wanted to advertise to a younger audience.  So there was a problem with the demographics, because Longmire’s audiences tend to be 35 and above.”

No one was more surprised than Walt Longmire’s creator, novelist Craig Johnson.  After all, “Longmire was pulling in close to six million viewers a week and had tripled A&E’s expectations in ratings.”

What was the real reason for the cancellation?

“A&E had a surprise hit on their hands and wanted to own the show,” Johnson says.  “You see, Warner Bros. produces the show and then the network pays a licensing fee to broadcast it. A&E figured that they could make more money off of the show if they outright owned it, but Warner was aware it was a hit and also had Longmire licensed to about 100 other countries where it was also a hit, so they weren’t about to sell it. Well, A&E told them that if they didn’t sell it to them they would cancel it, and they did, cutting off their own hit to spite its ratings.”

Longmire’s producers went shopping for a new venue, and rumors swirled about where it might end up. TNT? USA? FX, to replace the exiting Justified?

Instead, Longmire found a welcome at the last place you would expect a “geezer” show to roost, Netflix, home of House of Cards and Orange is the New Black. It’s a pretty edgy locale for a character who doesn’t own a cell phone or a TV.  Johnson concedes, “I think Walt would head over to the Red Pony Bar & Grill and watch Longmire, as only Henry would have Netflix.”

Unlike A&E, which relies on advertising to determine which shows stay in the lineup, Netflix is a company that values what its viewers want. Netflix is delighted for the opportunity to lure some of those 5.6 million Longmire fans away from A&E and hopefully cultivate many more viewers along the way. As long as its 65 million subscribers are happy, Netflix is happy.

McClarnon has been pleased with the transition to Netflix. He has mostly worked with Taylor—“I like his process; I think he’s a phenomenal actor”—and he says now he gets to work with more cast members. “I have a couple of scenes with Graham Greene, and he always brings surprises and lightens up the scene. And Adam [Bartley]—we say a couple of words to each other.”

“My relationship really hasn’t changed with the flip to Netflix,” Johnson says.  “I’m a writer, and the thing I can help with is the writing. The producers send me the scripts, and I go through them and send back my suggestions. Sometimes we agree, sometimes we don’t, but that’s the kind of collaborative relationship you have to have in a project this size.”

One change is that, as with other Netflix series, the on-demand Internet streaming media company does not offer a traditional “one-a-week” release. “They’re going to drop all 10 episodes this fall at once, which should really test the viewing fortitude of the fan base,” Johnson says.

McClarnon approves. “Personally I would rather sit down and watch the shows in my own time,” he says.

Streaming is scheduled to begin on September 10, with season four available in the U.S., Canada, Australia and New Zealand.

One major positive change in the series is the definition of a TV hour. McClarnon recalls, “They screened the first episode in Santa Fe for the cast and crew, and it went an hour and six minutes.”

“We used to be trapped in the basic-cable format of 42 minutes with the burden of commercials,” Johnson explains.  “But now we’re picking up at least 20 more minutes of content per episode, which is about a third of a season. That’s a pretty dynamic change.  It’s going to give the writing and performances much more of a chance to breathe, which is one of the things that make the show different from everything else out there in the first place—that sense of silence.”