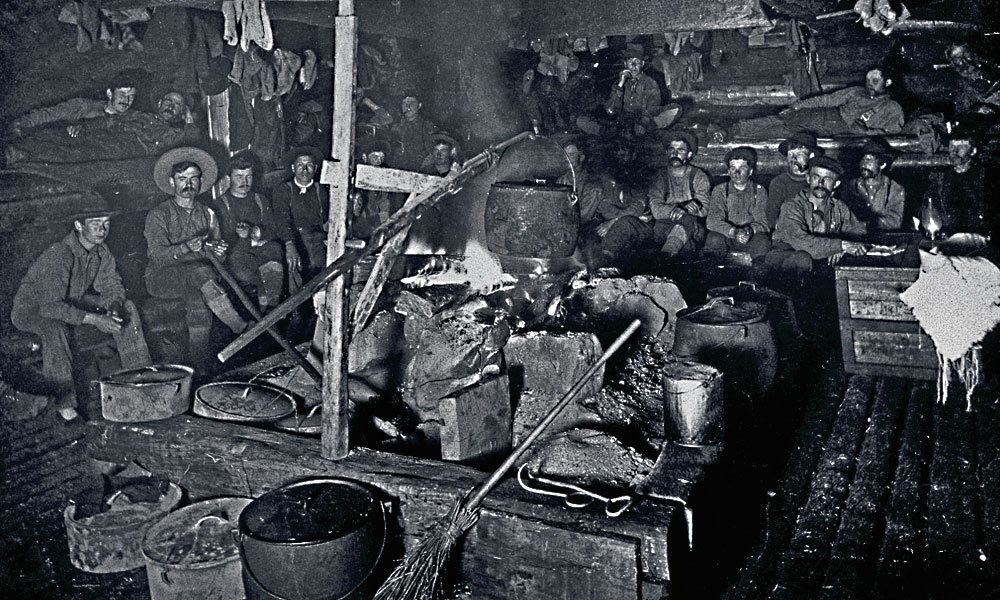 Bunkhouses served as the cowboy’s residence when he wasn’t out on roundups or driving cattle to market. His fellow cowboys became family. The cook who fed them all on the trail usually also fed them on the ranch. (Unless the cowboy worked for a smaller ranch that provided his living quarters; then he ate his meals with the rancher’s family in the main house.)

The bunkhouse was meager, but provided a bed, shelter and meals. For a trail cowboy, these offerings were a welcome change, as Edward F. Jones, an Indian Territory-born herder, revealed while recalling his cowboy days working at the BO Ranch in Texas:

“When I hit the BO outfit, I thought I was a regular.… John Petrie was the top screw at the time, and it was him I hit up for a nesting place.

“It was late of day, and he said, ‘Well, kid, cool your saddle and put your nose in the chuck trough. After you have attended to those duties, we’ll gab a spell about the matter.’

“It was not long ’til the belly cheater yelled, ‘Come a-running you snakes, and get it.’ That call had a pleasant sound because I had nothing but a Spanish meal since morning and was gaunt.

“The cookie gave us broiled steak, baked beans, soda sinkers, stewed prunes and all the Texas butter, sop and black coffee we desired. After I had packed the chuck ’til my tapeworm quit yelling, the top screw says to me, ‘Let’s adjourn to
the dog house where we can chaw the rag a spell.’ We moseyed over to the bunkhouse and sat down while he began to get my history.”

Colorado cowboy George Stiers left us with an image of a bunkhouse at meal time, when he remembered his cattle years at the Brand Ranch owned by the Eddy brothers near Slidell: “We had a large bunkhouse to sleep in when not out on the range too far to get in. There was a big shed with long tables where we sit down to line our flue [eat]. Pat Lawson was the chief cook and a good belly cheater who spent years with the outfit. He always went with the chuckwagon and left his helpers at the main joint.”

In the 1880s, the beef-and-beans chuck at the RR Ranch in Denton County, Texas, was served along with a guilty pleasure. “The cookie would regularly fix up something for our sweet tooth, such as fried pies made from dried fruit, pudding of some sort and, once in a while, a cake,” cowboy George Martin recalled.

For a tasty treat the cowboy in your life may appreciate, try the included 1897 recipe for apricot fried pies.

In a medium saucepan, add just enough water to cover the dried fruit. Bring to a boil over high heat and cook until the water evaporates. Add the sugar and cook for another two or three minutes. Remove from the heat and mash. Set aside to cool.

Roll out pie crust to one-quarter-inch thickness, and cut into six-inch circles. Place a tablespoon of the fruit on one side. Moisten the circle with water and fold it in half. Use a fork to seal the edges.

Fill a stockpot with half an inch of oil, and heat over medium-high heat. Test the oil by adding a small piece of leftover pie crust. If the oil bubbles, then it is ready. Gently add the pies, three at a time, with tongs. Cook one side for about two minutes, and then turn over and cook until golden. Drain on paper towels. Caution: Filling will be hot.