Hays in an Uproar 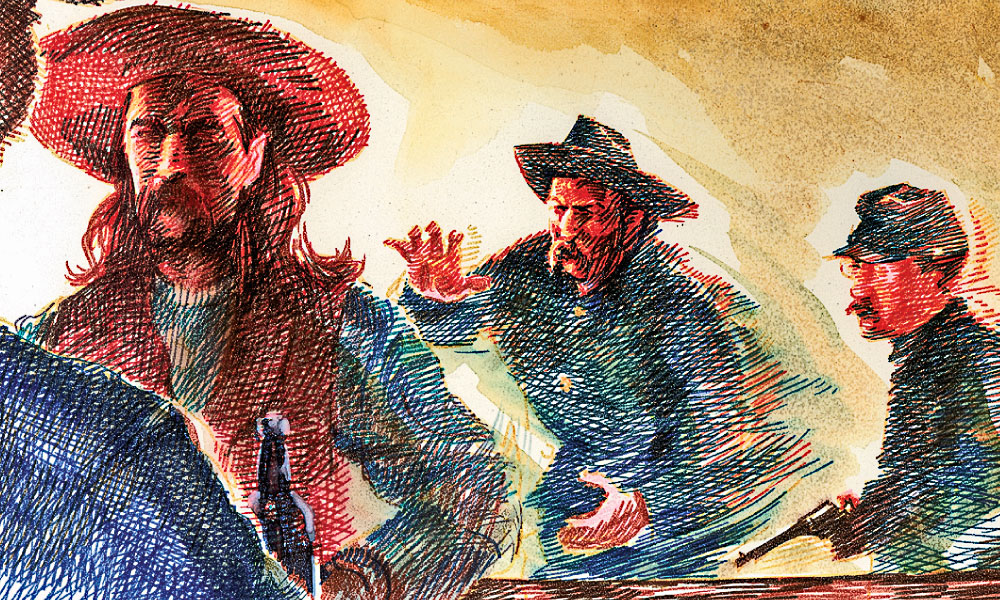 Of the two known troopers, Jeremiah Lonergan, a “pugilist” and powerful man, pins down Hickok. He does everything in his power to keep the lawman’s arms away from his body…and his pistols.

A second soldier, John Kile, whips out a Remington pistol from underneath his blouse, “put the muzzle into Wild Bill’s ear, and snapped it,” an eyewitness claims. The pistol misfires.

Amid the yelling and ensuing commotion, Hickok and the two soldiers grapple on the floor, each trying to get an advantage. (At some point, Hickok is wounded in the leg; the historical record is unclear if he was shot or merely injured in the scuffling.)

In spite of Lonergan’s best efforts, Hickok grabs one pistol from his holster and fires a round, hitting Kile in the wrist. A second round hits Kile in the side, and he rolls away in agony.

Lonergan desperately fights for his life as he tries to keep Hickok’s pistol barrel pointed away from him. Pushing against the much larger man, Hickok fights with all his might, finally turning his pistol far enough to fire. The resulting shot hits Lonergan in the kneecap.

Stunned, Lonergan gives up his grip and joins Kile on the disabled list. Hickok wastes no time escaping as he scrambles to his feet, makes “tracks for the back of the saloon” and jumps “through a window, taking the glass and sash with him….”

When news of the gunfight reaches Fort Hays, a number of troopers seize their guns, head for Hays City and search all the “saloons and dives,” but they can’t find their man.

James Butler “Wild Bill” Hickok returned to his room and grabbed a Winchester rifle and 100 rounds of ammunition. He hid out in the Boot Hill Cemetery, west of town, waiting for an attack that never came. In the morning, he boarded a train at Big Creek Station and hightailed out of the area.

John Kile lived until July 18, when he died from wounds received “as a result of a drunken row and not in the line of duty.” The year before, Kile had received the Medal of Honor for protecting his fellow soldiers in an Indian skirmish.

Jeremiah Lonergan recovered from his wound. The day after Christmas, in a drunken rage, he threatened to stab a sergeant. He was sentenced to nearly three years at Fort Leavenworth in Kansas. He disappeared after that.

As the months turned into years, the legend of the gunfight expanded with each retelling, and the tally of soldiers fighting Hickok grew. James Buel’s mammoth 1881 tome, Heroes of the Plains, has Hickok fighting 15 soldiers (see illustration above) and being wounded seven times after killing three troopers.