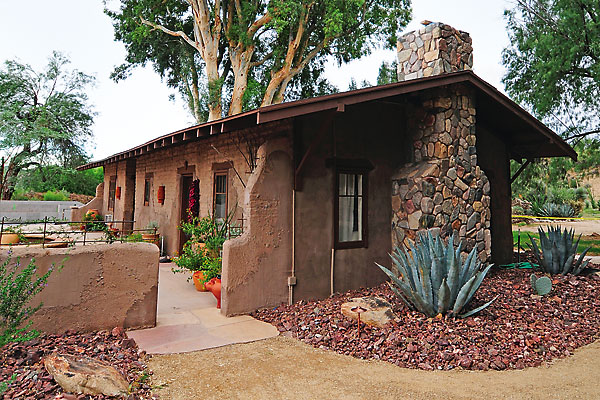 Dee Steed was born in Wyoming’s Star Valley; he knocked around Wyoming with his cowboy father, worked cows himself and spent six years on the rodeo circuit.

He hit the circuit finals a few times, even broke into the top 15 cowboys, and he was willing to climb on all manner of broncs.

Steed traded his Wyoming range for the warmer climate of Arizona 14 years ago and punched cows for the Forepaugh Cattle Company. The outfit “had a lot of bronc horses, and I just loved working there, but 12-14 hours in the saddle every day just started getting to me,” he says. “I rodeoed professionally for six years, and I broke a few things along the way. Those things kind of catch up to you.”

Besides that Steed found himself talking “to the cows or my horse.” So he began working for the Kay El Bar Guest Ranch near Wickenburg, Arizona (welcoming guests since 1926), where he became manager two years ago. He says the principle of ranching at a dude ranch operation is similar: “You’re herding dudes rather than cows.”

Now instead of talking to his horse or the cattle, he has an opportunity to meet people from all over the world. “They’re on vacation; they’re having fun. It’s kind of a positive thing,” he says. “I always said the worst thing I could do is go work for a dude ranch. But by golly, down here in Arizona, it’s not a bad way to make a living.”

On the ranch Steed manages the staff and the stables, he takes guests on rides and he gathers the horses with the aid of his dog Reba, named after Country singer Reba McEntire. “We named her that when she was just a pup because she was just singing all the time,” he says. “She’s my jingler. We have about 40 head of horses, and she runs them in every morning.” As ranch dog, she also “meets and greets all the people.”

Steed’s home these days is a one-bedroom, one-bath stick-built structure covered with stucco, giving it the appearance of adobe. The circa 1950 home was completely renovated, down to the studs, last summer. Its ceiling was raised, opening up the kitchen and living room into one huge room. Dee has a big screen TV in there, and on some nights, you’ll find the room full of wranglers gathered around it watching bull riding.

On the coffee table are medicine rattles, also given to Steed by Navajo friends after he was injured when a rodeo bronc slammed him into a fence, breaking his leg. Possibly the most interesting item in the home is a Two Grey Hills Navajo rug from Shiprock, Arizona. “Believe it or not, I found it here on the ranch,” Steed says. “It was wadded up in the old laundry room that we tore down and rebuilt. It was in the corner, looked like it had been used for a rag.” Steed recovered the rug and washed it by hand three times before eventually hanging it in his living room. He believes it is a “pretty valuable rug.” Just the story of how he found and salvaged it gives the rug value.

His small L-shaped kitchen with pine cabinets has a bar with the ranch brand embedded in the top. Steed says he likes to cook steak, potatoes, spaghetti and chili beans, and uses his own recipes; he doesn’t have a cookbook. And because he seldom eats sweets, he doesn’t have a cookie jar either.

The spare furnishings of the bedroom include a bed, ceiling fan and a combination of Navajo rugs and saddle blankets strewn on the floor. He has several guns on the wall, including a Savage 30.30 that was a gift from his father, a Henry rifle and a .22 that he uses for “plinking.”

Steed calls his decorating “Simple Cowboy.” Work clothes, boots and hats are the “accents” to the spare furnishings.

The Kay El Bar is a “hidden jewel,” he says, a place for a cowboy to enjoy horses, people, the aid of a good dog and to relax at night after the work is all done in a home strewn with cowboy gear and a bit of Indian medicine.