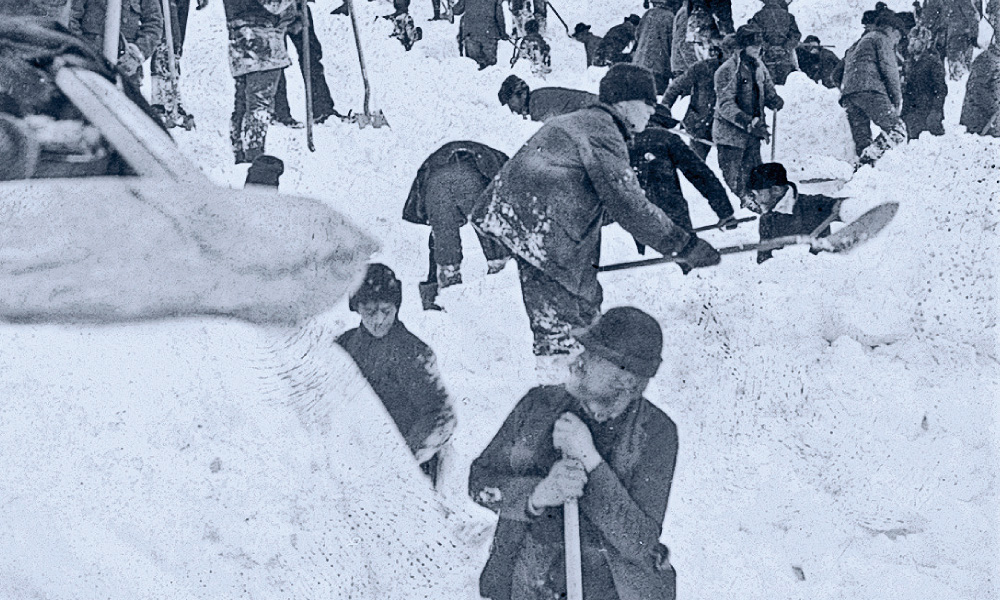 The mining community of Alta, Utah, has the dubious distinction of being among the top in the world for suffering catastrophic avalanches. The town has been obliterated on more than one occasion by the sudden onrush of tons of ice and snow. Some survived by allowing the avalanches to bury them alive, sheltering in provisioned cellars and  mine shafts.

Alta started as a community of lumber mills. In 1853, soldiers picnicking with their wives near the mouth of Little Cottonwood Canyon discovered an odd-looking stone. The high-grade silver in the rock set Alta on a course of expansion familiar in many other Western communities.

Yet Alta’s steep mountain slopes combined with heavy seasonal snows, which made timber skidding easier, created difficulties for miners. Snowpacks built upon weak layers of snow in steep terrain set up conditions that could result in the sudden release of the snow’s hold on the slope. Alta’s mining camps were in prime avalanche country. Despite being obliterated on several occasions, the town still reached a peak population of roughly 8,000 in the late 1860s.

Between 1872 and 1911, Alta camps saw at least nine killer avalanches and two killer landslides. These avalanches killed roughly 61 people, and the landslides added another 16 to the roll of tragedy, though a total of 143 may have died in all the disasters. The 1881 and 1885 avalanches saw the highest documented death tolls, 15 on each occasion.

On January 13, 1881, around 10 p.m., the snow slipped off the side of the mountain with a swishing sound that gathered volume until it roared like thunder. A huge wall of snow and ice rushed toward the canyon bottom, sweeping all but the stoutest trees in its path. The boiling wave of snow swept away telegraph poles, a railroad shed and an ore house. It smashed a home, breaking all the windows and forcing the doors in. This was only the first act in the tragedy.

At midnight, a second avalanche tumbled over the Victoria and Imperial House, burying the structure in 20 feet of snow. The two occupants survived and spent 10 hours digging themselves out. The tidal wave of snow proceeded to wipe out the Grizzly Boarding House. There, some of the occupants sleeping upstairs were thrown out the building, surviving that ordeal, but others were entombed. The community rallied to dig for survivors. The next morning, two young boys were found alive among the frozen corpses.

Help came from outside, and rescuers soon realized that the disaster was greater than originally thought. Much of the town had been flattened or buried by the torrents of snow. The inhabitants of the camps dwelled in bunkers to protect themselves from avalanches. Three men perished in a fire created by the avalanche in their otherwise safely bunkered cellar. Roughly 25 miners survived by sheltering in deep mine tunnels that had been stocked with provisions for just such an occurrence. The railroad, though protected by a snow shed, was buried, which further complicated evacuation and rescue.

In 1898, the largest avalanche occurred, when roughly four miles of crown line collapsed. Despite the enormity of the disaster, no one perished, as Alta was almost empty and the miners were safely underground when the avalanche hit.

Miners remained in Alta until the silver played out in 1908. Mining is recognized as a dangerous profession, but many consider the dangers to lie in the extraction of minerals and the survival of the wild mining camp lifestyle. Alta is a clear example that sudden death has many authors.