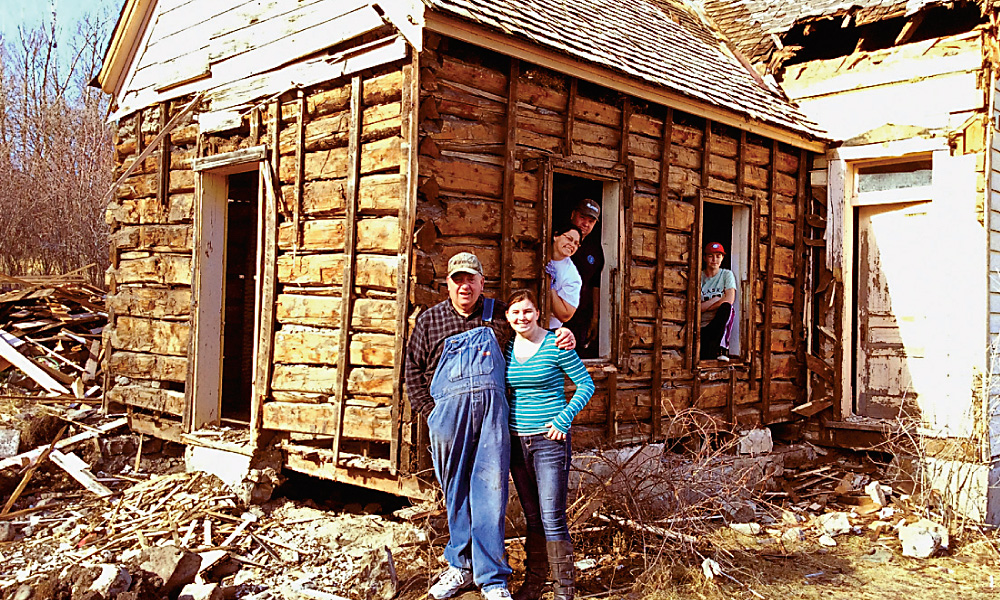 Vicky Doolittle knew her great-aunt’s house in Mendon, Utah, contained an amazing secret. Yet when she tried to tell others in her family, they thought she was fibbing.

“My cousin didn’t believe it. My husband is a builder, and he said, ‘No way.’ But
my husband had to eat crow,” she says.

Because surprise, surprise: Great-Aunt Clella Ladle’s house encased a log cabin from the Old Mendon Fort. Her family had simply built the bigger house around the original cabin as the family grew.

The story began when John and Susanna Ladle emigrated from England as Mormon pioneers in the late 1800s. “They were poor, and somebody probably gave them the cabin from the fort,” Doolittle says.

The makeshift fort—made up of two rows of cabins, with wagons in between as “walls”—protected settlers from 1859 to 1864. In 1893, the Ladles moved the 14-by-16-foot cabin with a team of horses a half mile to their home site. The family had six children then, but grew to 12, and the house kept enlarging, eventually concealing the cabin.

“My great-aunt lived there her entire life,” Doolittle says. “She was an amazing, hard-working woman.”

Born in 1899, Great-Aunt Clella lived the longest out of the 12 children, dying in 1986. She was like a grandmother to Doolittle. “Because we lived next door, I spent a lot of time with my great-aunt and heard a lot of family stories,” Doolittle says.

Thankfully, one of the stories she heard revealed the fort-cabin-inside-the-house.

Doolittle’s son recently tore down the house to build a new one for his family. He was hammering away to remove a back wall when he discovered the hidden cabin. Doolittle quickly recognized this piece of history should not be destroyed.

She called the American West Heritage Center in nearby Wellsville and told them about the Mendon cabin. “Would they like it?” Her simple question did not hide the cabin’s importance: “Were Mormon settlers important to Utah Territory?”

The find is “priceless,” says Annalise Christensen, living history coordinator at the heritage center. “We know of very few fort cabins still in existence. Fort life was a time of turbulence, and cabins weren’t built to last forever. But this one is well preserved because it was covered up for over 110 years.”

The one-room cabin that didn’t even have a fireplace is getting a new roof and chinking, and will be added to the center’s Pioneer Settlement. “We have a dugout, a homestead cabin and now a fort cabin,” Christensen says. Visitors can enter these pioneer homes to get a real feel for Old West life.

Doolittle is grateful her great-aunt shared the secret with her. “It would have been tragic if I hadn’t known,” she says, because the family would have overlooked the cabin as just old log walls and destroyed it.

She hopes the fort cabin will teach others this simple yet important lesson: “From the beginning, people who came to settle made do with what they could.”