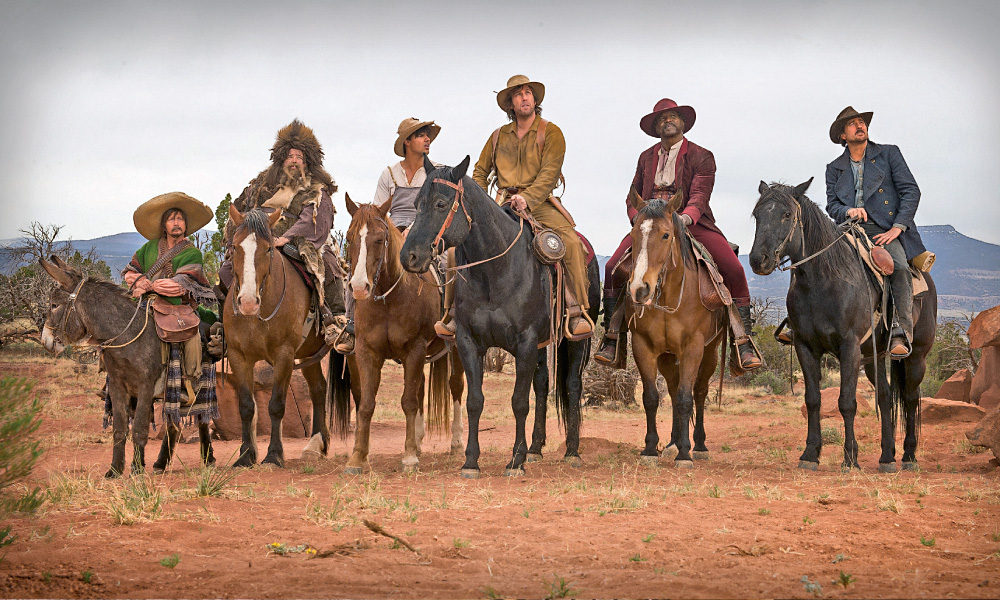 Funerals are a Western movie tradition: they’re intensely dramatic, with family, or grizzled outlaws, standing over the grave of someone whose death is going to be avenged. On film, that tradition has become glorious cliché, and in print, a tiresome one, as critics, podcasters and industry commentators declare the Western genre to be the body in the hole.

The problem with this declaration is that no one has bothered to tell filmmakers. In 2016, major studios are unleashing three Westerns that have all been branded with controversy, but hold great promise.

Quentin Tarantino’s The Hateful Eight was news because the script was leaked, leading the writer-director to cancel the production. But a public reading, multiple rewrites, the casting of Kurt Russell, Samuel L. Jackson and Bruce Dern, and a sizable budget from the Weinstein Company changed all that. The Western debuted on Christmas Day.

Fueled by his love of 1960s Roadshow event films, Tarantino shot The Hateful Eight in anamorphic format, evoking the widescreen pallet of 1962’s How the West Was Won.  The Hateful Eight will be released at different running times, with the longest cut having a musical overture and an intermission.

Tailing against the “epic tradition,” however, The Hateful Eight’s story scope is an intimate one, inspired by half-hour TV Westerns like The Rifleman and The Rebel, with its characters snowbound and their personal violence exploding in the cabin where they are trapped.

This stepping around conventions is one of the elements that brought makeup effects genius Nick Marra onto the project: “Being a long-time fan of Westerns, and having worked with Quentin on several other films as part of the KNB EFX team, I knew this was going to be another special experience. My favorite assignment was to sculpt a head of Bruce Dern. I was a big fan, and to have the opportunity to sculpt his makeup was truly an honor.

“Quentin has a unique take on any subject, and this is especially true in his Westerns. His enthusiasm is contagious. As Clint Eastwood once said, and I am paraphrasing here, ‘America has two unique art forms: Jazz music and the Western.’ I agree completely.”

Adam Sandler’s Western burlesque The Ridiculous 6 also had a troubled birth. The Sandler-produced comedy jumped from studio to studio, finally landing with Netflix, the largest-budgeted film ever undertaken by the streaming service. The Western features cinematography by Dances With Wolves Oscar-winner Dean Semler and a huge cast that includes Sandler, Nick Nolte, Harvey Keitel and Danny Trejo. The Ridiculous 6 is not a below-the-radar production, especially when Navajo actors Loren Anthony and Allison Young and a dozen others walked off the film in protest of the movie’s degrading depiction of American Indian women.

Anthony made headlines, but the film’s silliness actually cooled the problem; hundreds of other American Indian artists stayed with the production, thinking that the lampoon was just that.

Sandler, in his producer’s hat, acknowledged the issue within Hollywood and encouraged the American Indian cast to speak on their treatment, and their feelings about the script. Such talks amounted to a laugh at the insanity of The Ridiculous 6’s satire and its broad, nonstop jokes.

With Sandler’s near-atomic Jerry Lewis-style comedy, complete with outrageous stunts and physical gags, The Ridiculous 6 is more in line with a big-budget F Troop than 2014’s mean-spirited A Million Ways to Die in the West.

Billed as a “Netflix Original” and released last December, The Ridiculous 6 proves that the distribution of movies is changing, from theaters, to cable, to DVD, to streaming.  Westerns can now play in any media platform, giving the genre exposure far beyond what was available five years ago and, hopefully, creating new Westerns fans in the process.

If Sandler’s film is lampooning The Magnificent Seven, then Denzel Washington and Director Antoine Fuqua are taking on the original, turning it on its axis and creating a new, high-powered shoot-’em-up.

Shot in Louisiana, from a script by John Lee Hancock and others, this Magnificent Seven looks to the Akira Kurosawa original, 1954’s Seven Samurai, and the turns in the remake of John Sturges’s 1960 classic, to arrive at its story of a town controlled by an unscrupulous mine owner and the seven men who band together to take on his corporate hired guns.

This 2016 parable, set in the 1870s, reflects the attitudes of the Japanese film, revealing what happens when victims decide to be victors.  Sony-MGM is set to open its entry in the huge Westerns sweepstakes this September.

Critics may be standing at graveside, although what they’re seeing is not a funeral for the Western, but a resurrection.

C. Courtney Joyner is a screenwriter and director who has produced more than 25 movies, and the author of The Westerners: Interviews with Actors, Directors and Writers.