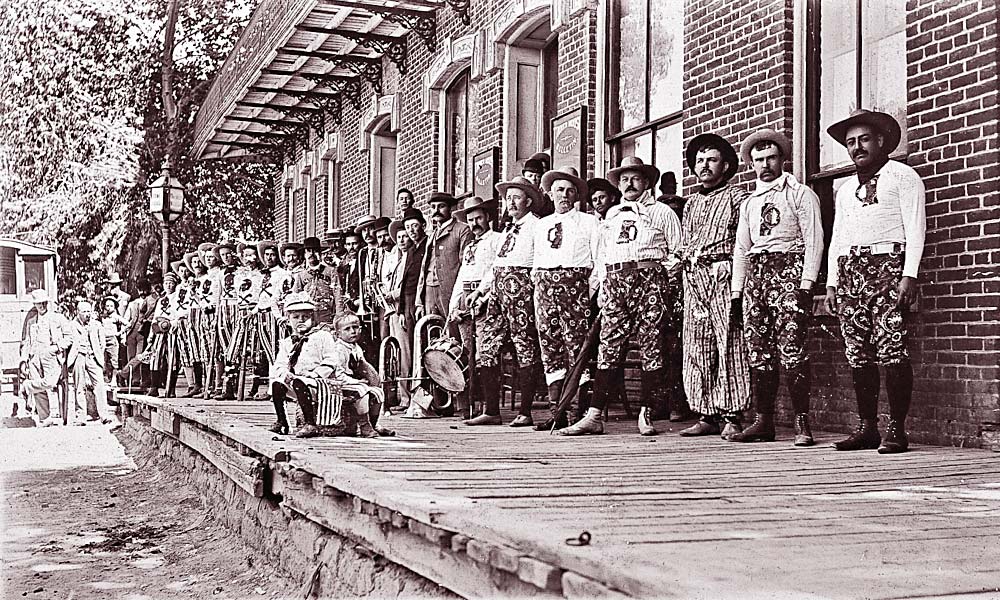 The silver mining camp of Silver City, New Mexico, took all of three years after its founding to form its first baseball team. The Silver City Mining Life reported of the team’s 1873 formation by calling the sport “bone-breaking” and “joint-dislocating.”

Yet the sport grew so popular, as it did in many New Mexico mining towns, that Silver City ushered in a new era of competition in 1887: Burlesque baseball, featuring contests between the “Fats” and “Leans” of the community. The thin fellows, known as Slim Jims, wore white suits decorated with skulls and crossbones, and carried dudish canes. The fat fellows, appropriately called Fat Fellows, wore suits bearing decorative beer mugs.

The nines marched to the baseball diamond to music headed by Prof. Langer’s band and Drum Major Fritsch. But the teams’ humor extended far beyond the uniforms. “The ice wagon was on hand rigged up as an ambulance and stationed at third base with a plentiful supply of beer which the jolly teuton who handled the lines dealt to the players who reached that goal. He was uniformed as a Dutch peasant, with wooden shoes, and wore a government cap,” reported the Silver City Enterprise on August 26, 1887.

A gift of beer when you hit third base? That brings new meaning to a “drinking game.”

An umpire armed with a “big revolver” officiated the game, and the Slim Jims thought they would win by tiring out the big guys. They were mistaken. “The pitcher and catcher of the big men ‘did the business,’ and the muscle of the monsters sent the balls away over the heads of the fellows of match-like form,” the paper reported. The Fat Fellows won by a score of 20 to 6.

An 1892 Southwest Sentinel article drew the greatest comparison between the size of the two teams that year: Leicham, catcher for the Fat Fellows, weighed about 400, while Moses, catcher for the Slim Jims, looked closer to a midget compared with his counterpart.

Silver City’s Club House Nine disbanded in 1898, as players drafted into a local Rough Rider contingent for the Spanish-American War. But the ball game came back to town, and Silver City formed its baseball association to finance the sport in 1912. The following year, the mining town joined the first of the Copper Leagues.

The “grotesque and fanciful costumes” worn by the rival burlesque baseball teams, however, brought smiles to faces at Silver City’s mining camp starting nearly 130 years ago, and smiles to faces today, with one fan successfully bidding $500 for an 1888 photograph of the players at Cowan’s Auctions in Cincinnati, Ohio, on November 20, 2015. Other Western pioneers stood out in photographs at the American History auction where collectors earned nearly $460,000 on their history artifacts.

The Wyoming town of Sheridan is the cherished home of generations of cowboys. One such cowboy, Don King, emerged from ranch life to become the creator of the most influential style of Western leathercraft.

True West readers recognize his signature emblem, the wild rose, and collectors, museums and galleries all over America proudly exhibit his Sheridan-style saddle.
But no collection of his craftsmanship is more complete than the saddles that line the walls at the Don King Museum, preserved along with other fine examples of Western tack, firearms, Indian artifacts and wagons. Our readers have long viewed Sheridan as the ultimate place to experience Old West history, which is why the editors named Sheridan its first True Western Town ever when the magazine introduced the honor. That our readers chose the Don King Museum as the year’s best Western Collectibles Gallery is no surprise to us. The “King of the Western Saddle” dwells in all of our hearts and continues to inspire us to live the Western way of life. [Please note: Our 2016 “Best of the West” readers’ choice for this category incorrectly cited Booth Western Art Museum, the winner of another honor. Our readers chose the Don King Museum. The editors apologize for our error.]