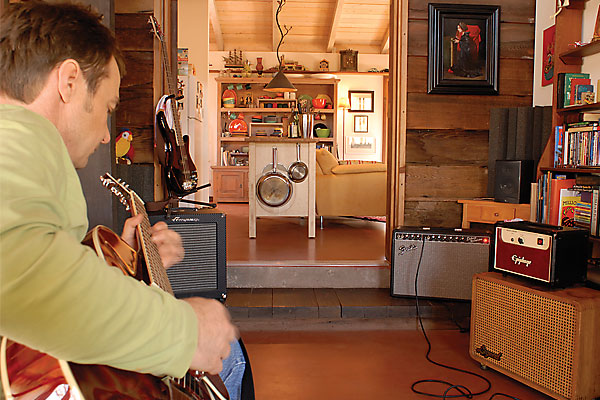 Living and working as an artist in one of the few places in Scottsdale, Arizona, that remains natural and largely undeveloped, Mark McDowell daily draws inspiration from the rugged landscape and the nurturing environment.

He lives in a “little handmade house in the center of posh Paradise Valley,” with an uncharacteristic dirt driveway. Constructed out of “mostly recycled materials, including some wonderful old redwood from a dude ranch out in Carefree that we went out and tore down,” Mark’s home is one of several structures at Cattle Track. This artist’s retreat is all thanks to the support of George and Rachel Ellis. These early Arizonans were “long time patrons of the arts in some quiet ways,” Mark says.

George L. Ellis came to Arizona in 1937 and began a career as an architect and builder. Using boards salvaged from an abandoned water pipeline, he built a
small redwood cottage at 105 N. Cattle Track. That type of architecture—aesthetically interesting, yet utilitarian—is representative of Ellis’s work.

Simultaneous with Ellis building his home, Philip C. Curtis arrived in Arizona on an artistic mission as part of Roosevelt’s New Deal. He founded the Phoenix Art Center, which became the Phoenix Art Museum and home to a large collection of Curtis’s paintings. The Ellises welcomed Curtis and allowed him to convert a stable on their property into a house and studio where he lived and worked until his death in 2000. Over the years George and Rachel—more recently Janie Ellis—have nurtured the artist colony at Cattle Track, making it a home for dozens of artists.

“It is a sort of a refuge in the middle of Scottsdale,” Mark says. “It’s still undeveloped. There’s still plenty of creosote around.”

At the compound are galleries, a print shop which Mark operates using old printing equipment salvaged from Wickenburg, a dance studio for Janie (a ballerina) and studio spaces in an old barn that are used by artists, a blacksmith, ceramicists and photographers.  “It is a little bit of a refuge for artists to work at and to show their wares,” Mark says.

What kind of wares does Mark show?

Over the decades since he relocated to Arizona in 1976 with his Fine Arts degree from Penn State, Mark has relied on his printmaking and drawing training to make a living, often creating subjects in series. Because his dad was a carpenter, one series focuses on tools. Another focuses on the circus, “Because I worked with the circus for a while,” he says.

Recently he has created “drawings of big toy cars and trucks situated in desert landscape.” These toys and trucks are representative of the era of the 1920s and 1930s, and he says he only depicts American cars and trucks, using a medium of colored pencil on birch plywood.

Mark has been named Artist of the Year by the Scottsdale Cultural Council and has received top awards from the Arizona Commission on the Arts and the Museum of Fine Art in Santa Fe, New Mexico.

In addition to creating his own art, Mark maintains and operates the printing presses at Cattle Track (including an old letter press salvaged from Wickenburg); his works are often made with vintage processes. With support from the Cattle Track Arts and Preservation Trust—a non profit organization formed, he says, to “keep Arizona history moving along”—Mark has created Tiny Satellite Press. He collaborates with other artists, photographers and writers to publish books and portfolios of photography in extremely limited editions.

Currently he is developing a project with the renowned photographer Jay Dusard creating a portfolio of ranching families and their operations and the landscapes they work in. Another of his projects is a collection of palladium prints by Robb Kendrick, known for his tintype photographs of Texas and Mexico cowboys.

The work Tiny Satellite Press undertakes is “rooted in the Old World techniques, but we certainly are willing to embrace the new world ones as well,” like setting type digitally and then printing it on letter presses, Mark says.

Through all the “address changes,” the place has remained the same, Mark says: “It’s a few sprawling acres of undeveloped desert that has provided a nice home and refuge for many, many artists over the years.”