Run Out of Town On a Rail 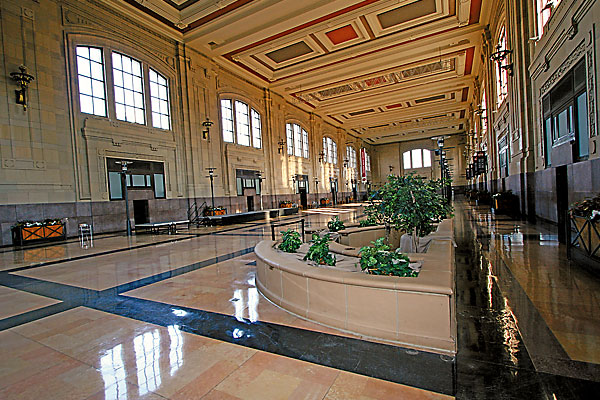 A Western romance comes to life while I ride on Amtrak’s Southwest Chief. I feel its authenticity—from the close-up scenery speeding past the window to Doc Holliday’s rib-cracking cough. Unfortunately, Doc’s sitting next to me.

Okay, so he isn’t Doc Holliday, but his cough is louder than those by Doc actors Kirk Douglas, Val Kilmer, Dennis Quaid and Jason Robards combined—in Sensurround. Well, it could be worse. I could be on an airplane, in the middle seat, stuck between two offensive tackles for the Green Bay Packers. Besides, Doc soon takes his cough to the observation car, a civilized thing to do.

Train travel’s civilized. That’s why I like to ride the Southwest Chief. The Amtrak route runs from Chicago to Los Angeles, soaking up the history along the way.

10:55 p.m.: The Westbound’s pulling out of Kansas City, Missouri, and one of the finest depots in America. On June 17, 1933, Charles “Pretty Boy” Floyd allegedly led what became known as the Kansas City Massacre, leaving four cops dead outside Union Station. The plan was to free prisoner Frank Nash, but the outlaws wound up killing him too. Ooops.

6:34 a.m.: Dodge City, Kansas, knows trains. The Santa Fe Depot, completed in 1898, is a restoration work-in-progress, home to a theatre company, historic twin sundials and a historic Fred Harvey House. No wonder people are stepping off the train to get a close look at this wonderful building. Oh, wait. They’re just getting off because this is a smoking stop.

9:02 a.m.: Running late, the train leaves La Junta, Colorado, and a voice comes over the loudspeaker that a non-passenger forgot to get off in time. The train stops. The voice says, “He’s off.” The train starts up again. Try doing that on a Boeing 727.

3 p.m.: A National Park Service ranger is in the observation car, giving a history of the Santa Fe Trail. We’re between Las Vegas and Lamy, New Mexico, and I’m waiting for him to mention the fact that somewhere around here Billy the Kid put an entire slice of apple pie in his mouth on his way to the Santa Fe jail. He doesn’t.

8:04 p.m.: Galloping into Gallup, New Mexico—and only an hour or so late. Doc Holliday’s still in the observation car. The dining car is calling in the next reservations, reminding me of the time I ate dinner on a train with a 21-year-old waitress with purple hair. Train travel, you see, is civilized.

9:10 p.m.: %&*&*%@*@&% civilization. Doc Holliday’s back, with death rattling in his throat. Outside sits the wonderful La Posada Hotel, one of the last great Harvey hotels, in Winslow, Arizona. I could be in the Turquoise Room and Martini Bar but, no, I’m sitting here listening to the guy next to me cough himself to death.

7:45 a.m.: San Bernardino, California. Doc Holliday’s gone. Soon the Southwest Chief will reach its destination, and what have I learned?

1. Yes, I can carry on conversations with purple-haired, 21-year-old waitresses.

3. Train travel isn’t North by Northwest, but it’s a heck of a lot better than that disastrous flight in Airport ’75.