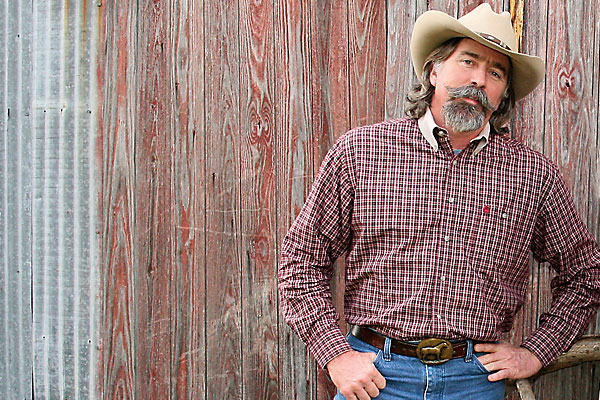 I grew up in the country. We ranched, worked hard and did virtually everything ourselves. That kind of upbringing instills resourcefulness, efficiency, determination and persistence. Yes, my inner strength falters sometimes, but always rallies.

Creativity has a way of procreating. I listen to quality music and read as much good literature as I can. I also enjoy long moments of quiet time in the woods or on the back of a horse. This combination leads to inspired creativity for me. Almost every great moment of inspiration I have ever enjoyed has resulted from something someone said, or wrote, or played or sang before me. Often, however, the inspiration doesn’t truly sink in until I am alone in a quiet place.

A song snippet I admire: “The yellow-haired lady was buried at sunrise, the stranger went free, of course / ’Cause you can’t hang a man for shootin’ a woman who’s trying to steal his horse.” —Willie Nelson

My horses and dogs are truly good friends. They cheer me up when I’m melancholy, and they’re always ready to load up for some adventure.

I caught a whiff of a skunk in a suburban neighborhood, while living in Austin, where I attended the University of Texas. The odor, though foul, reminded me so much of living in the country that I dang near blubbered up. That’s when you know you belong in the country, when you long for anything rural—even the pungent aroma of a pole cat.

My favorite song lyric might change from moment to moment, depending on what mood I’m in, or what’s going on in my life. I know it’s been over-played by pop radio for decades, but “Desperado” by the Eagles comes as close to perfection as any lyric a songwriter could ever hope to create.

Running my own music label is something I have a whole lot more control over. I get out of it as much as I put into it.

Years ago, Willie Nelson built a movie-set Western town called Luck, Texas, on his ranch. We decided to bring the town to life and use it as a setting for our novel. The story is designed for Willie to play the lead character in the movie, which we intend to follow the novel. Willie’s character is a retired Texas Ranger, rancher and town founder. The novel is a cross between a Western and a murder mystery with plenty of action and intrigue.

History has taught me that we live in the greatest country the planet has ever known. As a writer, I constantly remind myself that if I don’t produce, I am squandering a rare opportunity—one not commonly afforded to many citizens.  That is the constitutional right, as Americans, to say or write whatever we please without fear of imprisonment, torture or execution.

I’m fortunate that I own a small piece of ranch land, and that also provides inner strength, as does my affinity for horses. Horsemanship is a huge confidence builder. I believe in God, and I do pray for strength.

Texas singer Mike Blakely has won his second Spur, for his song “The Last Wild White Buffalo.” With six CDs under his belt, Mike is also a Western writer and has finished his 16th novel, this time with Country icon Willie Nelson, which is due out this year. Mike will receive the Spur at this year’s Western Writers of America (WWA) convention held in Scottsdale, AZ, from June 10-14.

(Editor’s confession: My favorite Mike Blakely song is “My Days are Numbered,” which I first heard him sing at an impromptu music session outside a Cody, WY, hotel bar at the WWA Convention.)

Texas singer Mike Blakely has won his second Spur, for his song “The Last Wild White Buffalo.” With six CDs under his belt, Blakely is also a Western writer and has finished his 16th novel, this time with Country icon Willie Nelson, which was published in 2008. Blakely received the very first Spur awarded for “Best Western Song,” at the 2008 Western Writers of America convention held in Scottsdale, Arizona.