I Will Kidnap No More Forever 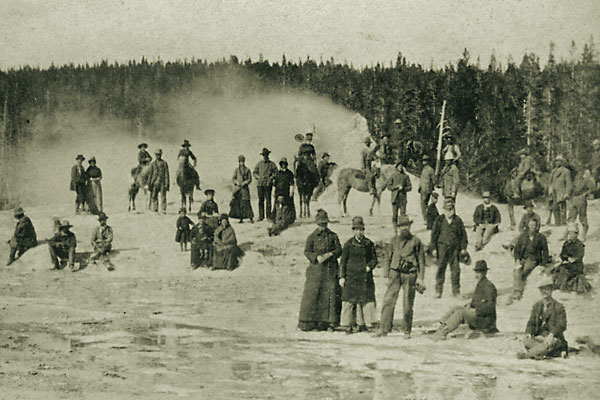 Tourists had been sojourning in Yellowstone National Park each summer since just after its establishment in 1872.

They kept coming during the summer of 1877, even though the big news was the flight of Chief Joseph and the Nez Perce Indians. Chief Joseph and his tribe, reluctant to move onto a reservation in Idaho, instead fled that state and crossed into Montana after battling the army at White Bird and along the Clearwater River in late June and early July.

Aware of the Nez Perce flight, but unconcerned about any potential impact
on their vacation, Emma Cowan, age 23, with her husband George, of Radersburg, Montana, set off in August for the cooler climate of Yellowstone. Accompanying them were Emma’s 13-year-old sister Ida Carpenter and 27-year-old brother Frank Carpenter.

With horses, a double-seated carriage and a baggage wagon to haul food and supplies, they were well equipped as they struck the Madison River on the west side of the park August 9. The Cowan tourist party followed the Madison to the Firehole River before turning south to reach the Lower Geyser Basin where they built a base camp. For two weeks, they hunted, camped, fished, explored and viewed the sites in Yellowstone.

On August 9, when the Cowans first entered Yellowstone, Chief Joseph and the Nez Perce Indians found themselves under attack in a pre-dawn strike at the Big Hole in western Montana.

By August 23, the Cowans had returned to their main camp in the Lower Geyser Basin for one last night in the place they called “geyserland.” They sat around the campfire, singing and telling stories, as they prepared to leave the park the next day.

At dawn, advance Nez Perce scouts came upon the camp and took the tourist party into custody. For the next several days, the Cowans traveled with the Indians, walking or riding broken-down Indian ponies because the Indians took the stronger Cowan horses for their own use.

Eventually Emma and Frank were in Chief Joseph’s camp circle, while Ida was kept in a different area with Looking Glass, one of the Nez Perce headmen. Earlier, the siblings and George Cowan had been released by the Indians. But before they traveled far, several renegade tribesmen surrounded them firing several shots that struck George and severely wounded him. When Lean Elk, one of the tribal leaders, came upon the scene, he forced the hotheaded Indians to halt their attack. Emma, Frank and Ida were again taken into custody, and George was left for dead.

Nobody had expected Chief Joseph and the tribe to enter and spend 13 days in Yellowstone, but the park offered them the same enticements anyone who visits the area seeks: solitude and resources to supply immediate needs, such as good grass for their horses and plenty of fish and game for food.

While in Chief Joseph’s camp, Frank Carpenter attempted to talk with a headman, who paid him little attention as he sat “sombre and silent” by the fire. “Grave and dignified, he looked a chief,” Emma recalled. When her brother picked up an Indian baby lying on a blanket and handed the child to Emma, Joseph’s countenance changed; she saw the “glimmer of a smile on his face, showing that he had heart beneath the stony exterior.”

Although clearly captives, the Cowan siblings were treated kindly, and they remained with the tribe as it traversed what became known as Mary’s Trail, crossed the open meadowland of the Hayden Valley and followed the Yellowstone River upstream to Mud Volcano. There, the stench of sulphur mixed with the burping, bubbling sounds of superheated boiling mud stung their noses as they plunged their horses across the river to set up a new camp.

That night, a lengthy confab took place at Chief Joseph’s fire, with that leader clearly arguing on behalf of the tourists. The following morning, Emma and her siblings Frank and Ida were taken across the river, given two horses to ride and
told to “go quick.” Cautiously, they followed the river north, met a military contingent that had followed the Indians into the park and finally returned home. Emma remained distraught over the demise of her husband. Her husband George, however, proved his strength and resilience. Although seriously wounded, he survived and was eventually located by another army scouting party.

After releasing the tourists, Chief Joseph led his people north through the Pelican Valley and along the Lamar River, eventually departing Yellowstone and moving on north to a final encounter with the soldiers at the Bear’s Paw battleground in northern Montana, just about 40 miles from the sanctuary they sought in Canada.

The nearly two weeks the Nez Perce spent in crossing through Yellowstone, while giving them a chance to rest and recuperate, had allowed the military ample opportunity to get into position to force their surrender.

Candy Moulton is the author of the Spur Award-winning biography, Chief Joseph: Guardian of the People.