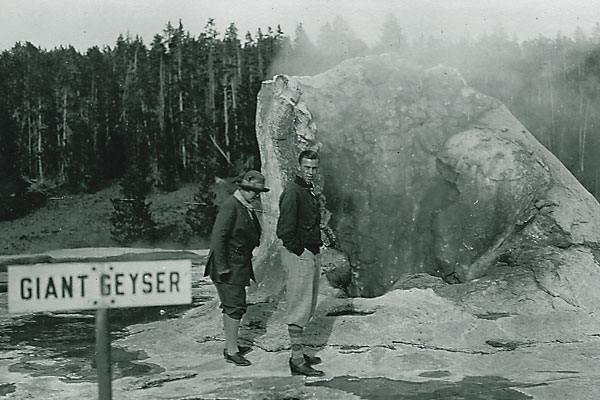 A journey along the “Grand Loop” of Yellowstone National Park in the late 1800s was a true adventure.

Keenly interested in the history of photography in Yellowstone, cultural anthropologist and photographer Sandra Nykerk of Gardiner, Montana, says park visitors began to document their own Yellowstone experience around the turn of the 20th century, shortly after the invention of roll film. Then, as now, tourists sought the perfect photographic opportunity to “bag” their own trophy images of our first national park. The language of photography, says Nykerk, “comes directly from the hunter’s lexicon. In fact, the use of the word snapshot was originally applied to a technique used in British shooting sport.”

“In trophy hunting, it’s very obvious what the trophy is, what you’re doing. In photography, you’re still hunting, but the trophy becomes the image.” The quest for the perfect trophy image is why some photographers return to shoot the same subjects again and again. “Everyone wants the pictures of Old Faithful, the grizzly bear and Yellowstone Falls.”

Early images of Yellowstone helped to convince Congress to establish the park in 1872. “With the memories and consequences of the Civil War still fresh and divisive, the country turned its collective imagination … to the formulation of landscape as national monument and the invention of a unifying, national tradition,” writes Nykerk in her thesis, “Pilgrims and Rituals in Yellowstone National Park.”

Yellowstone also served originally as a commonly held “outdoor museum” exhibiting the exceptional curiosities unique to the Western landscape. In the wilderness of Yellowstone National Park, the Victorian passion for collecting and cataloging could be indulged, all while encountering “an illusion of immersion and rejuvenation in wild nature” for “refugees from a chaotic and hostile world.”

Originally, those refugees arrived by train and stagecoach. With the advent of the automobile in the 1920s, the demographics of park visitors began to include more families. In the 1960s, the new science of ecology created a profound shift in both thought and management for Yellowstone; defined primarily as a “pleasuring ground” for tourists, it became a refuge for disappearing wild nature. Today’s tourists arrive prepared to compare images of Yellowstone icons with the reality and “test the authenticity of the wilderness against the idealized image.”

Traveling along the roads and trails of our first national park these days, complete strangers bask in shared wonder. Thrilled by the opportunity to capture and document their experience as thousands of visitors before them have done, they are united through time in the hunt for the perfect trophy image.

Jenna Caplette first visited Yellowstone in the 1960s, eager to bag a trophy image of Yogi the Bear with her Brownie camera. These days, she writes about photography for F-11 Photographic Supplies in Bozeman, Montana.