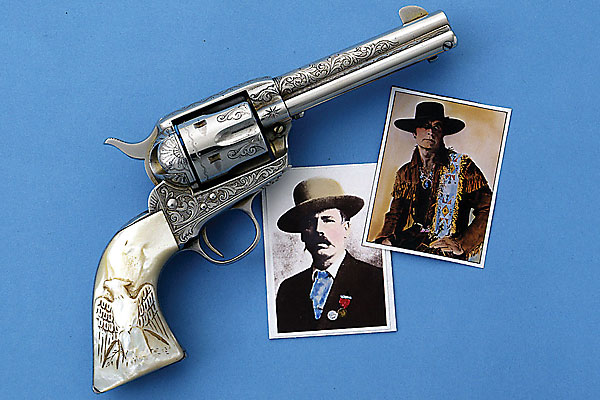 “When fact becomes legend, print the legend!” So goes the words of the great film director, John Ford, when asked about portraying truth in his Westerns.

As an entertainer, Ford was more concerned with telling a dramatic story than presenting a documentary of the Old West. Through his colorful, romanticized movies, he helped preserve the myth of the Old West, along with a bit of real history.

History purists, no matter what you think of pop culture, you have to admit that the story of the Old West is a flavorful blend of myth and fact. That blend applies to Western firearms, and a new exhibit shares the story of the armed West by grouping guns of the real Old West with guns of the mythical West of the silver screen.  Titled “Guns West,” the exhibit runs through January 1, 2009, in the William B. Ruger Gallery at the National Firearms Museum in Fairfax, Virginia, operated by the National Rifle Association (NRA). It will also feature firearms handled by today’s well-known Western shootists.

Colts, Winchesters, Smith & Wessons and other guns from the famous and infamous men and women who shaped our country in the post-Civil War era come from some of the most respected collectors in the world. Many of the more notable historical arms (some making their first public appearance) come from Kurt House of Texas and Jim Supica of Kansas. You’ll see guns owned by outlaws Jesse James and John Wesley Hardin, Texas Ranger Frank Hamer and Buffalo Bill’s Wild West show personalities Texas Jack Omohundro and sharpshooter Annie Oakley.

The exhibit then takes you into the mythical West of movies and TV, displaying the guns and costuming of celluloid legends such as John Wayne, Charlton Heston, Tom Selleck, Joel McCrea and Clint Eastwood. The silver screen shootin’ irons include Colts, Shiloh Sharps, Winchester rifles, muzzle-loaders and Springfield Trapdoors.

The final stage of the exhibition is dedicated to the shooters of today. Using their Colts, Rugers, Cimarrons and other Italian replicas, today’s shootists have kept the spirit of the Old West alive and well in the 21st century through family-friendly, firearms-oriented sports like Cowboy Mounted Shooting and Cowboy Action Shooting, as well as in Wild West shows and other historical re-enactments.

My wife “Lawless Linda” and I are especially proud to have a selection of our guns and Wild West show outfits appear in this display, along with those of other modern-day shootists like Harper “Judge Roy Bean” Creigh, the founder of the Single Action Shooting Society, and Jim Rodgers, father of the Cowboy Mounted Shooting Association.

Tracing firearms from the opening of the West to those of the fictionalized frontier and the cowboy sports of today is a mighty endeavor, masterfully handled by the NRA.