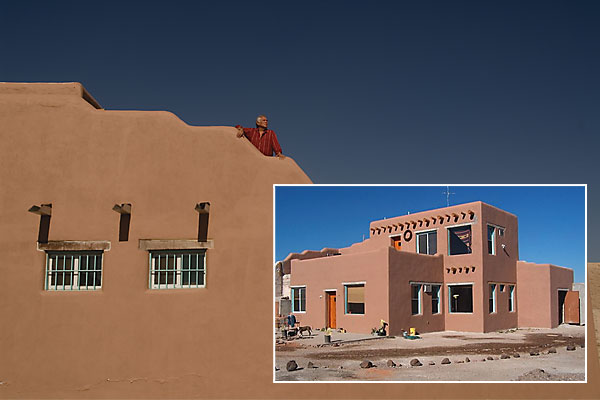 Drawn to Casas Grandes by its rich history and fueled by an interest in sustainable architecture, Jack Anderson set out to build a business and a home that would merge the two interests. While his dreams of operating a bed and breakfast, conducting tours of the area and teaching adobe construction workshops are not yet fully realized, he now has a home that was built using techniques first employed by Puebloan people centuries ago.

Archaeological study shows that from about 1250 AD to 1500 AD, when the major constructions were done at Paquimé—the massive site at Casas Grandes, Chihuahua, Mexico—builders used a poured or puddle style of adobe. In fact, it appears the Indians’ method was similar to today’s slipform construction in which concrete is poured into moving forms as previously-poured concrete behind it hardens.

Anderson, who has constructed buildings in various styles, has also worked with art organizations. He came to Casas Grandes several years ago after meeting Spencer and Emalie MacCallum through their joint  nterest in art and architecture. Spencer had become involved with potters in Mata Ortiz, helping them market their pottery, enabling them to remain in their homes rather than traveling north into the United States to create and sell their well-known, traditional-style pots.

After 30 years of visiting the region, the MacCallums eventually retired to Casas Grandes and began restoring some of the old structures in the 350-year-old town. Anderson came to Casas Grandes to assist in their adobe restoration projects.

“Essentially, I was helping them at first. As well as having some background in contracting, I have done a lot of style work,” Anderson says. He was staying in one of their older places—one of which was a sheep barn about 150 years old—and “did some tile work in trade for rent.” Then he assisted with other projects as the MacCallums preserved the old adobes.

These were private properties, older houses, in need of extensive repair. All were adobe block buildings located in the center of town. That area “represents the time period from the Spanish colonization,” Anderson says, and the buildings in the neighborhood are generally Mexican-Pueblo style.

Anderson purchased his own property closer to the archaeological site of Paquimé and the Culturas del Norte Museum. “I wanted to have more respect for the Pueblo Indian culture,” Anderson says about his decision to build a Pueblo-style home using poured adobe. He says the Paquimé ruins represent the culture of the people who lived in the region 500 to 850 years ago. “It was very sophisticated, a very high lifestyle. They built up to six-story buildings.”

Paquimé itself is an extensive ruin, encompassing nearly 90 acres with buildings that were multi-storied and which had perhaps 2,000 rooms. The inhabitants’ extensive irrigation systems served their agricultural pursuits; they likely came to the region from Chaco Canyon, recognized today as a World Heritage Site.

Why Paquimé was abandoned is unclear, although Anderson jokes, “I think they heard the Spanish were coming, and said, let’s get the hell out of here.”

When Anderson began constructing the building that will eventually serve as a bed and breakfast, he started with two rooms where he could store tools and supplies in one and stay in the other. It has become his personal residence. “I’ve done everything in the pueblo style, using the poured slip form technique.” With three or four other workers, he cut logs for the vigas, using horses to drag them from the Sierras. He spent more than a year putting up the first walls, “getting a feel for the technique, and then started on the house.” While using old methods to preserve the Pueblo style of construction, Anderson says he updated and modernized. For example, he added cement to the adobe pours—the Indians mixed soft caliche to strengthen their adobe—and he also used rebar reinforcing.

Now, in addition to his personal residence—which got an unplanned second floor after he finished the roof on the first floor and saw the incredible view—the foundations are complete for eight rooms for the B&B, but he admits, “it cost twice as much as I thought it would.”

His interest in adobe building began while he was involved in construction in Austin, Texas. There he worked in Santa Fe-style, but he says he was never really satisfied with the outcome. “When you add drywall inside, it is too manufactured, or too perfect,” says Jack, adding that a building with interior drywalls has “less character. It doesn’t have those irregularities that give this [adobe] style its real character.”

Anderson subsequently studied sustain-able construction, attended a school on the use of solar and adobe, and while there, he met the MacCullums, who drew him to Casas Grandes.

While it is architecture and art that have drawn Jack Anderson south of the border, the Casas Grandes area has a superbly rich history. Aside from the area’s very important Paquimé culture, the land was also frequented by other Indians, including the Apaches Victorio and Juh (both dying nearby) and Geronimo.

The railroad pushed through from Juarez in 1891-92, Mormons colonized the area—Colonia Juarez—and many of their descendants remain today raising orchards and engaging in other agricultural pursuits, along with more recent Mennonite settlers.

The New York Times reported heavy fighting at Chocolate Pass, southeast of Casas Grandes, where more than 250 insurgents were wiped out by Mexican forces in March 1911. An American company of 60 soldiers supported the rebels, but the majority of those men were captured by the Mexican command, raising concerns among the Mormon settlers who had been assured they would be protected if they remained neutral in the ongoing revolution. Five years later, Casas Grandes served as a headquarters for Gen. John “Black Jack” Pershing.

While Jack may engage in other pursuits for a time, he says he will eventually complete his B&B at Paquimé, providing an opportunity for visitors to come to the area, perhaps learn about poured adobe construction and experience the rich history of the region.