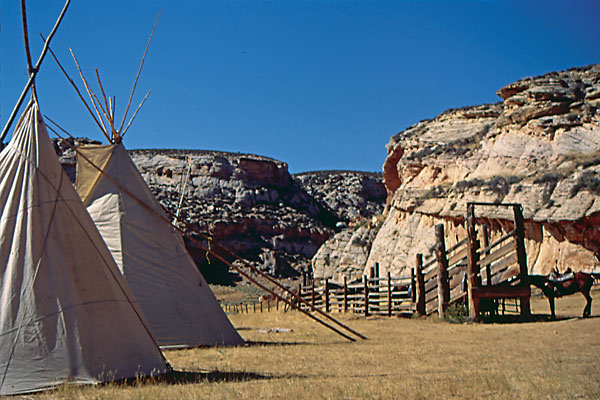 Members of the Wild Bunch Gang hopscotched across one isolated region to another where they found refuge from lawmen and posses once they had pulled off a job—whether it was robbing a bank or a railroad payroll.

They traveled many routes across the West in their quest for riches and for sanctuary, including what became known as the Outlaw Trail, stretching from the Canadian border to the Mexican border. The pathway from Landusky, Montana, to Alma, New Mexico, took the Wild Bunch through Hole-in-the-Wall Country, across the Red Desert, through Browns Park and on to Robbers Roost. In this colorful country, they engaged in an even more colorful collection of escapades.

Before he even joined the Wild Bunch, Harvey Logan’s deadly shot was known to citizens of Montana, especially after his altercation with the founder of Landusky.

Landusky met his end in late December 1894. Harvey Logan threatened him, and the two got in a fistfight. Landusky ended up pulling a gun on Harvey. When Landusky’s gun misfired, Logan fatally shot back.

The graves of Powell “Pike” Landusky and Harvey’s brother Johnny have bodies in them because men overreacted to situations that might have been settled with simple fisticuffs, had there been a cooler head to turn them.

By the late 1890s, Harvey Logan went by the alias Kid Curry, and was riding with Robert Leroy Parker (Butch Cassidy) and Harry Longabaugh (Sundance Kid) as part of the Wild Bunch. Landusky, Montana, became one of the northern-most points of the Outlaw Trail they used, and that is where we will start on this road of the renegades.

Ghost North of the Missouri

Landusky is not much of a town these days. In fact, it is almost a ghost located north of the Missouri River.

You can travel the route of the Wild Bunch by taking U.S. 191 south to Lewistown then heading east and south on U.S. 87 through Roundup to Billings. At Billings, drive onto Interstate 90 and follow it east and south through Crow Agency to Sheridan and Buffalo, Wyoming. Plan to spend the night in Buffalo so you can visit the Jim Gatchell Museum before you head south on I-25 and west on state route 190 into Hole-in-the-Wall Country.

Every member of the Wild Bunch spent some time in the Hole during the late 19th century, taking advantage of the isolation of the land and the support they received from small ranchers. Named for the opening in the red wall that allowed access, Hole-in-the-Wall today is a site on public land managed by the U.S. Bureau of Land Management, bordered by private ranches that ring the area.

Like it was when Butch and the boys hung out here, Hole-in-the-Wall Country is isolated, remote, seemingly devoid of people. Some are around, that’s for sure, but as the late, great cowboy singer Chris LeDoux (who lived near Kaycee) once said, “You just can’t see them from the road.” Could it be because there aren’t even many roads around these parts?

After detouring to the Hole, head to Kaycee for a visit to Hoofprints of the Past Museum, then drive south on I-25 to Casper, where you will find a variety of lodging and dining options.  I’d be remiss if I didn’t urge you to visit the National Historic Trails Interpretive Center and Fort Caspar, both outstanding facilities with new exhibits in place.

When departing Casper, take Wyoming Highway 220 and U.S. 287 west and south to Rawlins, a community in the center of outlaw country. Visit the Wyoming Frontier Prison (which has its electric chair still in place, though no longer functioning). I first visited this place when I was nine years old, when it was still in use as a prison. The prison scared the heck out of me then, and it is still creepy today.

Head a couple blocks up the street from the prison to the Carbon County Museum with its collection of outlaw items including another creepy thing in Rawlins—a pair of shoes made from the hide of Big Nose George Parrott. This outlaw took part in the killing of two deputy sheriffs and was eventually lynched in town (then skinned by the local doctor). He made his mark in Wyoming roughly 20 years before the Wild Bunch rode through.

The Wild Bunch robbed trains both east and west of Rawlins. A spectacular explosion of an express car took place at Wilcox (roughly 60 miles east of Rawlins) on June 2, 1899. The less spectacular, but certainly daring, robbery of a Union Pacific train occurred at Tipton on August 29, 1900, with the gang stealing an estimated $50,000. Anyone who has seen the 1969 classic film Butch Cassidy and the Sundance Kid knows C.E. Woodcock was aboard both those trains as the express car attendant. To avoid the dynamite blast that almost killed him in Wilcox, Woodcock left the express car in Tipton when the outlaws insisted he get out of their way.

Butch and the Boys Had It Easier

From Tipton, the train robbers struck out to the south across the Red Desert through the Adobe Town area that is one of the most unique places in all of Wyoming. The crew split, with Ben Kilpatrick, Harvey Logan and Bill Cruzan making their way to Dixon, where they stayed in the hay loft of a pal for a few weeks. Meanwhile, back in Idaho, Butch Cassidy, the Sundance Kid and Will Carver left town and headed to Winnemucca, Nevada.

You could end this Renegade Roads in Winnemucca and visit the First National Bank at 352 Bridge Street, which the Wild Bunch Gang robbed on September 19, 1900.

For this trip, I’m recommending a picturesque detour from Tipton. To immerse yourself more in Butch and Sundance’s world view, head to the hideouts frequented by the Wild Bunch at Powder Springs and at Browns Park.

Beyond a few isolated ranches, not much was found in this area when the Wild Bunch rode through. To be honest, the area is still quite uninhabited. So be sure to fill your fuel tank and stock up the cooler with water and food for the trip.

The Wild Bunch and their outlaw cohorts often returned to this area of southern Wyoming and northwestern Colorado after pulling off a job. Some of them found work with the local ranchers. They rested here, sharing some of the wealth that they had taken from a variety of banks and trains in diverse locations such as Montpelier, Idaho, Winnemucca, Nevada, and Telluride, Colorado.

My first trip through this outlaw country, years ago, took me west from Rawlins to Tipton and then south to Powder Springs before turning east to Baggs, Wyoming, a community where Butch and Sundance routinely spent time.  One of the town’s log buildings is reputedly one they stayed in.

I traveled with a couple of retired Bureau of Land Management employees who supposedly knew the country, but that did not mean we easily found the route across the isolated region. More than once we took a wrong way on the two-track roads and had to renegotiate our route. I figured Butch and the boys had it easier because their horses could navigate terrain that vehicles are unable to cross.

The route is doubly challenging today because of the even more extensive network of roads developed here during field promotion of oil and gas operations—and there is more traffic associated with the energy develop-ment too.

So you are less likely to spend the day wandering around trying to figure out which road to take, skip the route from Tipton to Powder Springs. From Rawlins, drive on I-80 and head west 20 miles to Creston Junction. Then turn south on Highway 789 to Baggs. From Baggs, you can continue on south on Highway 13 to Craig, Colorado, where you should stop at the Museum of Northwest Colorado, with its display of outlaw items, and then turn west on U.S. 40 and travel across Browns Park.

Another alternate route I suggest is driving west on I-80 to Rock Springs (where Cassidy supposedly once worked as a butcher—and gained his nickname “Butch”) and then traveling south on U.S. 191. Either way, you’ll pass through plenty of wide open country before you enter Utah.

For Butch Cassidy, home was the red rock country of Utah. He returned many times to the region that became Robbers Roost, in southeastern Utah southwest of Moab and bounded somewhat by the Colorado, Green and Dirty Devil Rivers.

To stay on the basic Outlaw Trail, follow U.S. 191 through Utah. As a side excursion, swing west to Helper for a visit to the excellent railroad museum where you can learn about the Castle Gate Robbery and see some remnants of the building that was the focal point of that payroll holdup.

After learning about Utah’s sole Wild Bunch robbery, head south toward Price and Robbers Roost, by following Highway 10 to Castle Dale. This rugged canyon country proved to be the third regular escape area for the Wild Bunch. Here, like at Hole-in-the-Wall and Browns Park, the men found sanctuary and isolation.

If you take U.S. 191 south through Moab, you can visit Arches National Monument (watch where you stand, though; in August, one of the park’s namesake arches crumbled to the ground!). Driving south toward Bluff and Monument Valley, you’ll have plenty of opportunity to see a landscape untouched by development.

Enter Arizona and the Navajo Reservation in the northeastern part of the state and continue south on U.S. 191 to Chinle, a gateway Navajo community to Canyon de Chelly. Then head on to Ganado, where you definitely should take some time to stop at the Hubbell Trading Post National Historic Site before resuming your Outlaw Trail trip south to Eagar.

Riding Under the Radar

From Eagar, head east into New Mexico on U.S. 180. This stretch of highway will take you to Alma, where members of the Wild Bunch found yet another ranching area for refuge. Their headquarters in this part of the country was at the W-S Ranch.

Alma, like Landusky where we began this journey, is really just a ghost of its own past, but the town is indelibly linked to the Wild Bunch. Hey, when you think about it, Butch Cassidy, Sundance Kid, Kid Curry and all the men they rode the Outlaw Trail with are also just ghosts now too.

As you drive this route, you will no doubt be struck by the isolation along the way. Cell phone reception is not great here and much of the region is also “radio free,” unless you happen to have a satellite connection in your vehicle. That means you can easily get a sense of the remoteness the Wild Bunch found. Their intent, in most cases, was to ride under the radar, finding isolated places where they could rest and regroup. You can experience that same isolation, although, pre-sumably, you are not also going to spend the time planning a heist as they would have done.