Worst Turkeys of the West 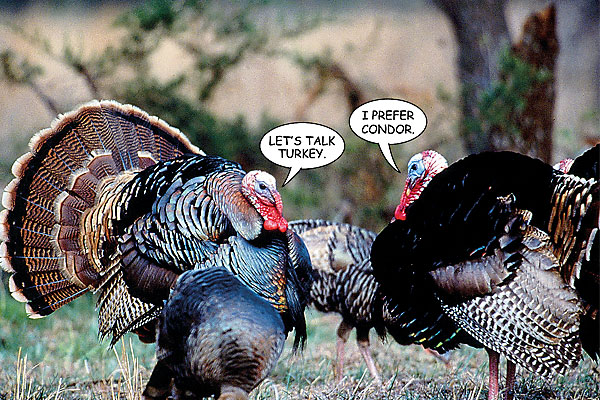 So in the spirit of the season—Thanksgiving is my favorite holiday—I pay tribute to the spoken word in my first (and likely last) True West Golden Turkey Awards.

Poor Choice of Words From a Factual Western Character Award: William Fetterman, who allegedly said, “Give me 80 men, and I can ride through the whole Sioux Nation.” His assertion came right before he led 80 men to their annihilation by the Sioux outside of Fort Phil Kearny in Wyoming. That’s akin to saying, “I feel lucky,” in a war movie.

Poor Choice of Words From a Fictional Western Character Award: Tom Dunson (as played by John Wayne) in 1948’s Red River: “I don’t like quitters, especially when they’re not good enough to finish what they start.” Uh, Mr. Dunson, isn’t that the definition of quitter?

Dumb Quote From a Dumb Waiter Award: At a chic (since closed) restaurant along Santa Fe’s upscale Canyon Road, I tell the waiter I’ll have “coffee, black,” and he asks: “Would you like cream and sugar with that?” Typically I take my black coffee without cream and sugar.

Dumb Quote From a Smart Waiter Award: The food is excellent, but I have to bite my tongue and laughter when the waiter says, “I’m sorry, sir, we have no Wisdom.” Assuming he means the micro beer I had ordered, I give him another option, although what I really want to say is, “No s—, you live in (Name Withheld For Protection of the Author Who Has Been Banned From Enough Towns).”

You Don’t Get Out Much Award: On the glorious narrow gauge train ride from Durango to Silverton in Colorado, while crossing a bridge over the Animas River, the woman in the seat in front of me asks her husband: “Elevation 7,700 feet. Does that mean the river’s 7,700 feet below us?” If it is, let me off this train!

Always Ask a Ranger First Award: At Glacier National Park in Montana, upon crawling back to the campsite hours after suggesting to my comrades that we take the shortest hike. Ranger: “Which trail did you take?” Reply: “Hidden Lake.” Ranger: “Oh, you mean Heart Attack Hill.”

Bad Geography, Worse History Award: Fort Sumner State Monument in New Mexico. “Is this where the first shot was fired in the Civil War?” No, that would be about 1,600 miles east of here at Fort Sumter in Charleston, South Carolina.

Dialogue I’d Just As Soon Forget I Ever Heard Award: “Hey, Johnny, how was that steakhouse I recommended in western Nebraska?” “Just great. Two hours after I ate there, the only thing not coming out of my stomach was the creature from Alien!”

Take a Look Around Award: Lincoln State Monument in New Mexico. “What street is the parade on?” Well, your best guess is probably the only street in town.

Wrong Place, Wrong Time Award: The person in line ahead of me asks, “Can I visit So-And-So?” After some deliberation, the ranger at Arizona’s Yuma Territorial Prison State Historic Park suggests, “I think you’re looking for the Yuma County Detention Center.”