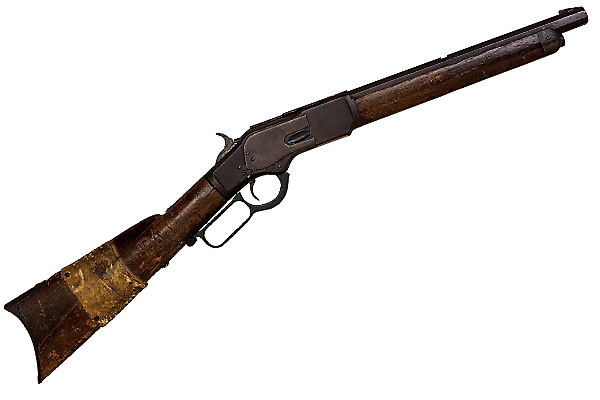 Instantly, two shots rang out from a darkened room, ending the life of one of the Old West’s most infamous characters, Henry McCarty, a.k.a. William Bonney, a.k.a. Henry Antrim, best known as Billy the Kid. This was the dramatic scene on the evening of July 14, 1881, when Sheriff Pat Garrett killed the notorious outlaw in Fort Sumner, New Mexico.

Fast forward to a brightly lit room in San Francisco, California, on June 17, 2008, where a group of eager collectors anxiously gathered to attend Greg Martin’s sale of Americana and firearms collectibles. This auction house has sold some of the finest examples of unique Western artifacts, such as an exquisite pair of Gen. George and Libby Custer’s 1865 wedding portrait vases for $60,000, an Annie Oakley monogrammed British shotgun for $60,000 and a Colt Single Action revolver presented by Buffalo Bill Cody to his friend, Dr. George “Nighthawk” Powell, for $190,000.

On June 17, Greg Martin offered to the highest bidder two especially worthy items with a Wild West heritage. One was a gold-engraved presentation Lincoln County Sheriff’s badge that was given to Billy the Kid’s killer Sheriff Pat Garrett by A.J. Fountain, a famous New Mexico judge. The reverse side of the badge is inscribed “To/Pat/Garrett/with the Best/Regards of/A.J. Fountain/1881.” The gilt star came with a satin-lined, fancy tooled leather case and an authenticating letter from Jarvis Garrett, Pat’s son. When the hammer went down, this handsome badge racked up a $100,000 price tag.

The second item connected to Pat Garrett was a well-used, 1873 Winchester, .44-40 cut-down rifle. The Staley family, the consignors, say the rifle was passed on to them in the 1920s from Florentine Baca, the son of southwestern lawman Cipriano Baca, a contemporary of Garrett’s. According to family history, Cipriano took possession of the Winchester during a card game in the late 19th century. Garrett was a known gambler and consistent loser at cards, which eventually led to his ruin. The rifle’s rough and gunfighter-modified condition added to its mystique.

Stamped with Serial No. 31829 and shipped from the factory on February 2, 1879, the rifle was cut from a factory-recorded, 24-inch octagon barrel to 12¾ inches and the magazine has been cut to half its length. The stock’s cracked wrist has been repaired with sewn and steel-tacked rawhide, and is adorned with cattle brands. This piece of frontier hardware gaveled at $30,000.  It just goes to show that sometimes crime does pay … just not the bad guys.

Greg Martin Auctions will be selling a collection of Colt Single Action revolvers in early 2009. Visit GregMartinAuctions.com or call 800-509-1988 for more information.