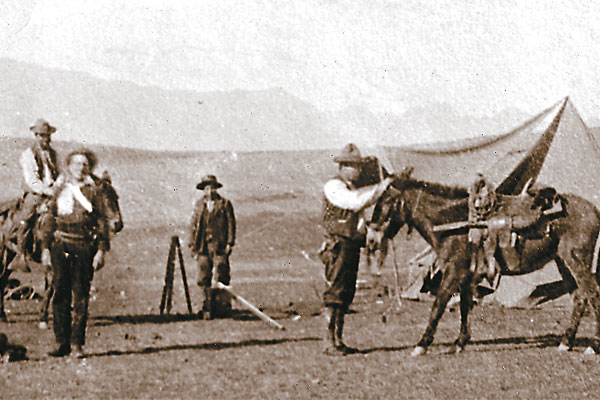 In 1985, shortly before we were to set off on a vacation to Argentina, Dan read Larry Pointer’s In Search of Butch Cassidy and learned that Butch and Sundance had homesteaded in the same area of Patagonia we were heading. We decided to find their ranch. That was the easy part.

We located the ranch and interviewed Aladín Sepúlveda, the gaucho in residence, and thought, maybe there’s a story here, an article we could write. After returning home, we learned about a simmering controversy over what had actually become of the outlaws. Was Butch Cassidy William T. Phillips, as Pointer contended? Was the Sundance Kid, as another writer contended, the half-pint Hiram BeBee? Did they both die in Bolivia, as historians like James Horan and Charles Kelly, as well as some members of their families said? Did Butch die the same year and in the same state as Phillips, but was someone else, as his sister Lula Parker Betenson wrote?

Or was there some other explanation? By the time we finished our initial research, we had collected dozens of tales of the outlaws’ deaths on three continents over several decades. What a tangle.

Our quest to discover the truth took us trawling through archives in the United States, Argentina, Bolivia and Chile. Some days were spent looking for the needle in a haystack; others were wasted in the dark cellar chasing the black cat that wasn’t there.

The first problem we faced was determining if a shoot-out in Bolivia had ever even taken place, a fact that no historian had yet established. Bolivian and Argentine newspapers provided that information. Later, we received a copy of the judicial inquiry of the shoot-out.

Next, who got shot? That was more difficult. The answer came in a clue here, a hint there. An American consular officer left records of his attempt to obtain Sundance’s death certificate in order to settle his estate in Chile. A Bolivian newspaper reported a man using Butch’s alias as registering in a hotel before the holdup. An English gold dredge manager wrote an article about his encounter with two American bandits. Percy Seibert, Butch and Sundance’s employer and pal in Bolivia, and Dan Gibbon, their best friend in Argentina, both said that the outlaws were killed in Bolivia.

The outlaws’ families also proved helpful in figuring out this mystery. In spite of Lula’s contention that her brother had survived Bolivia, most other close relatives said he had not. Several scoffed at Lula’s story. Sundance’s descendants were even more unanimous that he had not come back.

If we could have found Butch and Sundance’s remains, the story might have had a tidy, CSI ending. We had to dig up the wrong grave in order to determine that no one in San Vicente actually knew where their bodies were buried.

Nonetheless, our quest illustrates that archival research—haystack needles and absent black cats notwithstanding—can still untangle the thorniest of historical mysteries. At the end of the trail, we had an accretion of evidence indicating that two North Americans using aliases attributed to Butch and Sundance had died in San Vicente, and very little evidence to support the competing theories about their fate.

Getting to San Vicente is not difficult. If you plan carefully—and that means consulting Footprint Bolivia Handbook or Lonely Planet Bolivia—you can do it in about a week.

American Airlines has a late evening nonstop from Miami that lands in La Paz early the next morning. Arrange to have a jeep and driver waiting to whisk you south. You will be in Tupiza by dinner.

Our favorite Tupiza hotel, the Mitru, is associated with Tupiza Tours, which can usher you to local sites via jeep, horse or mountain bike.

In the old days, Tupiza was the entrepôt for the mule and wagon caravans between Bolivia and Argentina. On the main plaza are the cathedral, the prefectura and the home of Dr. Eduardo Eguía, all dating from the late 1800s. Butch and Sundance’s hotel, the Terminus, is long gone. Nearby is a regional museum, and at the edge of town, the Aramayo family mansion, Chajrahuasi, where the payroll began its fateful journey.

Set aside one day for the holdup route—Tupiza to Salo to Huaca Huañusca—and a second day for the trek to San Vicente. About the only landmark left in the village from the early 1900s is the cemetery, where Butch’s and Sundance’s bodies molder in an unmarked grave. The bones on display with the outlaws’ names belong to Gustav Zimmer, a German miner whom we, along with forensic anthropologist Clyde Snow and his team, dug up in 1991. (Don’t tell the locals.)

If you have time, you can go back north via the Lagunas Colorado and Verde, in the spectral, desolate southwest; detour through Uyuni, an old railroad town at the edge of the vast Salar de Uyuni; or pop over the border to Chile’s Atacama Desert.