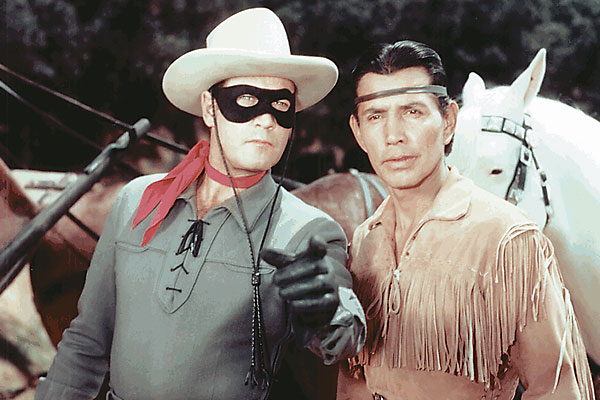 When Broncho Billy Anderson told director Edwin S. Porter that he could ride like a Texas Ranger, he won the role of a bandit in Porter’s 12-minute, 1903 silent film The Great Train Robbery. The truth came out though when Anderson barely got on the horse, so his role in the film was reduced to playing an extra.

But that experience in one of the world’s first films convinced Anderson to make a career out of playing cowboys in the newfangled film business. As the first great Western star, he would go on to actually play a Ranger in the 1910 picture The Ranger’s Bride, followed the next year by The Border Ranger, reports Bill O’Neal in this year’s Reel Rangers (Eakin Press).

In the subsequent decades, as many as 10 Westerns per year featured Texas Rangers. Some actors, such as Tex Ritter and Charles Starrett, played Rangers year in and year out. Starrett played the role of a Ranger 15 times between 1936 and 1951.

This year marks the 75th anniversary of the most famous of all Rangers, even if he was a Ranger in name only. He made his debut on radio in 1933, as a hero crafted for radio audiences of the Great Depression. Government had failed to protect the American people from what was the country’s worst financial experience. With America presently facing an economic crisis of unknown proportions, perhaps the Lone Ranger who cheered us 75 years ago will become our hero once again.

The Lone Ranger came on the scene as the sole survivor of an attack by the notorious Cavendish gang, an ambush which wiped out a number of dedicated Rangers, including his brother. His childhood friend Tonto, a Potawatomi originally and eventually seen as an Apache, rescued the wounded lawman and nursed him back to health, according to most versions of the story.

Most popular culture historians agree the Lone Ranger’s last  name was Reid, because his brother’s last name was stated as such. What his first name was is up for grabs; the writers made a habit of fudging the details and from the beginning, radio and TV series avoided naming him. Yet a 1964 Gold Key Comics retelling of the origin of the Lone Ranger stated his given name as Dan Reid, while the 1981 feature film, The Legend of the Lone Ranger, called him John Reid. Then again, in the 2003 made-for-TV movie The Lone Ranger, his name is Luke Hartman, and he has a thing for Tonto’s sister Alope! Whoever the masked rider of the Plains really was, he was likely spinning in his grave when that travesty hit the small screens.

What is consistent in all the many incarnations—radio, novels, comics, serials, cartoons, movies and TV—is that the Lone Ranger wears a mask, rides a glorious white stallion named Silver and rarely ventures far from his faithful Indian companion, Tonto. He always fires silver bullets, which he also uses as a calling card, and lives by a strict code of ethics that allows him to shoot the guns out of people’s hands, but never to kill, which most sharpshooters will tell you is a pretty good trick—especially when firing from a galloping horse. And he could be  seen, week after week, reared against a Western sky, the brassy “William Tell Overture” signaling the beginning of every new adventure.

The episodes usually ended when some hapless greenhorn would ask, “Who was that masked man?” But every local knew he was the Lone Ranger, and that he doggedly avoided any demonstrations of gratitude, always riding off in his snug powder-blue outfit with a hearty “Hi-Yo Silver!”

Tonto had a name of his own for the Ranger, “Kemo Sabe,” which most agree roughly translates to “trusty scout or friend.” A considerable amount of scholarly speculation still circulates about the etymology of the phrase, but type in “Kemo Sabe” in the search window of Cecil Adams’s website (straightdope.com) to get the skinny.

The radio show preceded a number of novels, followed by two serials and a successful comic strip, and there have been many Lone Rangers and a variety of masks. But for most people, there’s only one Lone Ranger and one Tonto, and that’s Clayton Moore and Jay Silverheels, who played the characters on TV for years, beginning in 1949.  Moore and Silverheels starred in two feature films and became icons all over again on reruns played in living rooms across America for years after the show ended.

Lone Ranger fans will unfortunately recall The Legend of the Lone Ranger—the 1981 film that is so awful, you’re glad there aren’t any extras in the new DVD package. The picture was the first and final acting job by leading man Klinton Spilsbury, who apparently pissed off everybody on the set and also had all of his dialogue dubbed by James Keach. Actually, most of the dialogue seems dubbed, and whoever wrote the wretched narration should have been marched in front of one of Butch Cavendish’s firing squads.

In this newer version, the young Reid’s parents are killed and he lives for a while with Tonto, a reservation Indian he once rescued from a couple of bad guys. His Ranger brother then sends him to school in Detroit. Reid grows up and comes back out West to practice law. After the ambush and the recovery, roughly an hour into the picture, he finally dons the mask, gets on the horse and basks in his theme song. Christopher Lloyd plays the diabolical Maj. Cavendish who sets in motion a plot to kidnap Ulysses S. Grant (Jason Robards) and take over Texas. Guess which masked man steps up to thwart the scheme?

There was a made-for-TV Lone Ranger, mentioned above, which is best forgotten, but Ranger fans should feel some measure of hope now that a long-rumored, big budget version of the Lone Ranger is finally being produced by Jerry Bruckheimer for Disney. The script is written by Ted Elliot and Terry Rossio, who are responsible for the two Zorro remakes and who put the Pirates of the Caribbean series together with Bruckheimer.

So it comes as no surprise that Johnny Depp is aboard, but what is a little surprising is that Depp will be playing Tonto. Depp does claim a little Cherokee DNA, which matters not at all, but it’s fun that he announced his role as the Lone Ranger’s sidekick at the Walt Disney Studios Showcase this September, parading on stage dressed as pirate Jack Sparrow, with a Lone Ranger mask on his face. Depp’s other Westerns role was as accountant William Blake, traveling a 19th-century West that transforms him into a hunted outlaw, in 1995’s Dead Man.

The hottest new rumor, unconfirmed at press time, but coming from solid sources, is that George Clooney is lining up for the part of the Ranger. It may be silly, it may be weird, but whatever the picture turns out to be, the casting and the budget will not be an issue. Westerns fans can cross their fingers and hope the movie in no way resembles the Wild Wild West big-screen adaptation of a few years back.

The Lone Ranger may be the most recognizable of all the movie Rangers, but the Texas Rangers deeply penetrated Western movies, from the gutbucket, cheapest, back lot Oaters to ambitious, top dollar, adult Westerns. In Reel Rangers, O’Neal speaks with authority on which of the many Ranger films rise above the throng. Almost every serious Western star played a Ranger at one time or another, including John Wayne, who played one in The Comancheros and who was deputized into the Rangers, briefly, in The Searchers. Clint Eastwood, Gary Cooper, Roy Rogers, Gene Autry and Robert Mitchum were all Rangers at one time or another on screen.

Certainly the Ranger film most justifiably honored in the last 100 years isn’t really a film at all. Lonesome Dove was a TV miniseries that tried to do in six-plus hours what Pulitzer Prize-winning author Larry McMurtry did in 864 pages, and the show very nearly pulled it off, thanks to the acting talents of Tommy Lee Jones and Robert Duvall. Jones and Duvall, as aging Texas Rangers Woodrow Call and Augustus McCrae, are looking for a new and possibly final adventure, which means stealing a huge herd of cattle and horses in Mexico, bringing them across the Rio Grande and then driving them up to Montana.  It’s an epic tale but the scope of the adventure never wanders far from the two central figures, which is one of the reasons the picture hasn’t lost much of its charm. The miniseries did slight, or even eliminate, some characters and scenes, but it was otherwise more faithful to the novel than almost any other adaptation in film history.

Lonesome Dove is back on DVD in a new two-disc edition, Blu-ray and regular, and the producers have done a fine job of remastering the picture and improving the sound. A couple of new extras are included in the package, but it’s the story that counts, and it’s a great one.

As far as The Lone Ranger goes, quite a few packages should make Westerns buffs happy. In honor of the 75th anniversary of the masked man, Classic Media is releasing the first two seasons of the original series on DVD in a 13-disc collection. That may sound like a lot of discs, but back then, two seasons were 78 episodes. The company remastered the lot, which is significant because cheesy Lone Ranger DVDs have been floating in the public domain for years. Listed at $119.95, the set also includes a 1950 radio broadcast, an episode of Lassie with a Clayton Moore guest spot, an episode of the cartoon show from the 1960s, an 88-page book and a comic book.

Besides O’Neal’s Reel Rangers, another new book worth checking out is The Misadventures of a Roving Cartoonist: The Lone Ranger’s Secret Sidekick (Five Star Legends). This is the posthumously-published autobiography of Tom Gill, who created 135 of the 145 Lone Ranger comic books launched by Dell in 1948. The book does not focus solely on the Lone Ranger, as it is a firsthand account of an artist who toured military bases and hospitals all over the world as part of a troupe of comic creators (including Mort Walker of Beetle Bailey and Al Capp of Li’l Abner).  A curious and mildly adventurous man, Bill took delight in some of the more risqué episodes in his travels. The book is light, but it’s charming and entertaining. And it includes some extra material on the various artists mentioned that is written by Gill’s collaborator, Tim Lasiuta.