History, Not For Sale 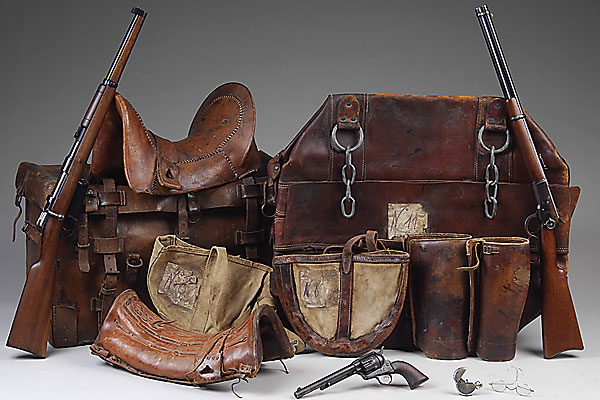 “BC&S Yard Sale” stated the subject line of an e-mail sent to me from Daniel Buck.

I had been working with Dan on final touches for his and Anne Meadow’s travelogue of the Bolivian Andes where both researchers believe Butch Cassidy and the Sundance Kid perished. The two should know; their passion for the subject is unparalleled and is evident in both the book they wrote after their research trips into Bolivia, Digging Up Butch and Sundance, and in their article published by us in this 100th anniversary year of the outlaws’ death.

So what was this e-mail about? It turned out that Dan had noticed James D. Julia Auctioneers was offering a collection of Butch and Sundance’s personal effects from Bolivia. I read on: “We evaluated that collection for Greg Martin Auctions in 2004 and concluded that the supporting documents were ‘riddled with anomalies, contradictions and anachronisms,’ and that two key documents linking the items to Butch and Sundance were forgeries.”

The alarm started sounding off in my head. This was not good news. James D. Julia’s auction that included this lot was only a few weeks away, on October 6-7. The first thing I did, of course, was pick up the phone and dial Jim Julia’s number.

In 1974, Jim purchased the auction company that his father, Arthur, had started in the mid-1960s in Fairfield, Maine. Jim has grown the business into a leading auction house in North America. In 2000, his firearms division set a world record for the most expensive historical American firearm ever sold at auction, when a Winchester Model 66, forensically proven to have been used at the Battle of the Little Bighorn where Custer and his command were annihilated, sold for $684,500. His auction house has a reputation of being honest and fair, and I knew Jim would want to hear Dan’s assessment of the lot.

By that time, though, the office was closed for the day, so I left a detailed message explaining what the situation was and that I hoped Jim would hear out Dan Buck before he went ahead with putting the lot on the auction block.

Jim called me back immediately the next day, but we ended up playing a game of phone tag. I was often away from my desk, working with Bob Boze Bell on his Mickey Free project. When we finally connected, on September 30, a very gracious Jim shared his appreciation for the heads up and was eager to hear what Dan had to say. I gave him Dan’s contact information, confident that Dan would open Jim’s eyes to what was about to happen.

By 1:35 p.m. that day, Dan sent me this e-mail: “Had a long chat with Jim Julia as well as one of his assistants. He tells me they will put a caveat on the lot.” This caveat, in effect, signals to intelligent bidders to stay away from this lot; whereas, someone who is not as concerned with the noted inaccuracies may be willing to take a chance on it.

Greg Martin opted to keep it off his auction block. A veteran of Butterfield Auctioneers, he launched his auction firm in 2002, specializing in antique arms, armor and historic memorabilia. No one could blame him, nor Jim Julia, for getting excited over this lot. Butch Cassidy and the Sundance Kid are household names. The Western icons had been immortalized in the 1969 George Roy Hill film that won four Oscars. The film ended with them in Bolivia, surrounded by the army, and just as they made a break for freedom, the frame shot froze. All the audience heard were rifle and pistol shots.

In front of both Jim and Greg was placed an extraordinary collection of firearms and accouterments believed to have been seized by the Bolivian Army after Butch and Sundance were cornered and succumbed to their wounds. That 83-year-old Paul Newman, who played the amiable Butch next to Robert Redford’s Sundance, passed away this September 26 meant more people than usual might have happened upon the October auction. In this day and age, we can easily Google our nostalgia, and the lot might have pulled them in, even convincing them to bid on this once-in-a-lifetime chance to own a piece of the BC&SK  history.

But it turned out to be nothing more than a “BC&SK Yard Sale,” as Dan Buck put it. That Greg Martin pulled the lot back in 2004 shows his high regard for honesty and transparency in his auctions. That Jim Julia added the caveat shows his earnestness to alert his buyers. And that Dan Buck and his partner Anne Meadows have continued to keep an eye on this collection shows their endless dedication and passion for a pair of outlaws who they first began trailing, purely by happenstance, in 1985.

Believe me, nobody would be happier than Dan and Anne if this lot was authentic. When Greg Martin first called them, their highest hopes hung in the air. But when they actually had the collection and its supporting documents in hand, their hopes sank.

The commander of the patrol who nabbed the outlaws was Justo P. Concha, yet the supporting documents noted his middle initial as D, Dan tells me.

Then, he says, some of the artifacts (none of which appeared in the 1908 inventories documenting the gear stolen by the outlaws) were stamped “Aramayo Franke.” Yet the name of the payroll company that Butch and Sundance robbed before their shoot-out with the army was “Aramayo Francke.”

Aramayo letter books state that Concha immediately turned over the money and gear confiscated after the shoot-out to courts in Uyuni. Aramayo was forced to turn to the courts to get its stolen items returned to the company. Yet the provenance surrounding this collection states Concha went AWOL with the stuff. A mighty strange tale to tell, Dan says, especially since Concha’s signature appears in Bolivian military documents weeks after the November shoot-out.

When the clock ticked to 4:30 p.m., I was reminded of something Newman’s Butch said: “You know, when I was a kid, I always thought I’d grow up to be a hero.”

Thanks to these four heroes, the collecting arena is still a trustworthy playground for history.

*UPDATE: This lot did not sell at auction.