Retreat at the Homestead Ranch 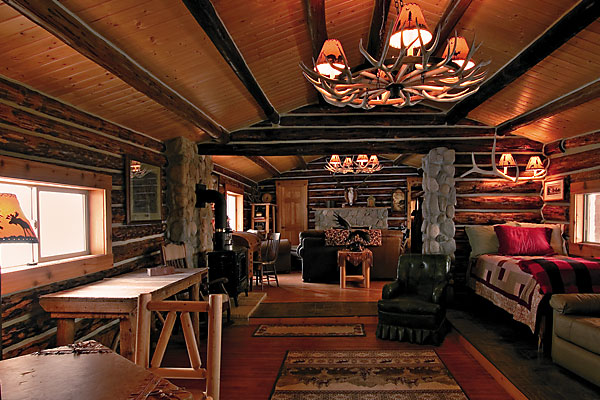 The first night Duaine Hagen spent at the Homestead Ranch was not exactly pleasant. He, a friend and a cousin reached the high elevation Wyoming homestead on a cold November day intending to use it as a hunting base camp. They started fires in two wood heating stoves and a woodburning cookstove; at 1 a.m. they could still see their breath inside the building. “I said right then I wasn’t spending another night in this place until we get it fixed up,” Duaine recalled.

At the time, the roof was “barely” in place. The log building had pieces of cloth stuffed in as chinking, which was held in place by pieces of wood; outside logs had been chinked, but after years of neglect, they were anything but airtight.

Homestead Ranch is located about 20 miles from Hagen’s home, the Fiddleback Ranch near Meeteetse, Wyoming. Now renovated, the Homestead serves as a guest home, hunting lodge and a retreat for youths who have serious illnesses.

While the ranch was homesteaded in the late 19th century, thus becoming known locally as Homestead Ranch, it became a guest ranch in the 1930s, changed owners several times and was allowed to deteriorate until Duaine and Sheila Hagen purchased it in 2003. Duaine has been a longtime big game outfitter in Wyoming, formerly operating Hidden Valley Ranch up the South Fork of the Shoshone River out of Cody, but he sought a place where he could take part in both guest ranch and hunting activities, though on a smaller scale.

Adjacent to the Shoshone National Forest, situated at 8,300 feet above sea level and near the head of the Greybull River drainage, Homestead Ranch is “unique,” Duaine says. “It does have quite a bit of history with being one of the earlier dude ranches up here. I like doing those kinds of projects. It was a challenge. Everybody thought I was crazy.”

Hmm … that comment strikes me as being similar to what my own family said about me when I told them I wanted to save Grandma’s Cabin (read “Saving Grandma’s Cabin”).

One of the projects “crazy” Duaine undertook was three additions to the main lodge.  “We wanted to make it more of an open look,” Duaine says, “so we took some of those partitions out and tried to open it up, to make it a lot brighter.”

Now there is a large open living room, granite countertop bar and a kitchen with granite countertops (Sheila wanted that type of countertop for their own home at Fiddleback Ranch but did not get them, so she insisted on them at Homestead). The additions also include a bathroom complete with a claw-foot tub and one bedroom with a small woodburning stove to stave off the cold at high altitude.

The building had a rocky foundation—literally. “We actually dug out and poured a concrete footer underneath [the rocks],” replacing the rock foundation support, Duaine says. Fortunately the lack of an initial foundation did not affect the sill logs, so it was not necessary to put in any replacements. “We never took any of the logs down at all,” he says, “but we took all the chinking off on the outside. The inside was not chinked, they had just stuffed the cracks with clothes, cloth items, and took wood bats and nailed against the logs; that’s why it didn’t hold the wind out.”

A one-time fire in the lodge left roof purlins covered in charcoal, so those had to be scraped and sanded. Workers also sanded the floor to its near-original look and put a “whole new roof on top of the old roof.” The new insulated roof sealed the building, making it easy to heat in winter and naturally cool in summer. “You go up there in the summer and it’s almost like you have air conditioning,” Duaine says.

Now used for a family retreat, for guests and as a hunting base camp, Homestead Ranch also has another use that Duaine did not initially envision: as a place for youths to experience the outdoors.

“We’ve been involved with the Outdoor Dream Foundation, which is like Make a Wish,” Duaine says. The Hagens open up their Homestead home to children with life-threatening or severe illnesses for at least one night, allowing the kids to engage in hunting and outdoor trips. The hunting trips are possible because the Wyoming State Legislature set aside big game permits for kids under age 18 who have life-threatening illnesses. Duaine and other outfitters provide the actual hunt opportunity.

“Because I’m an outfitter, the Outdoor Dream approached me to see if I would be interested in taking a little boy from Indiana on an elk hunt,” Duaine says. “It was such an experience for me that I wanted to continue it. We take three to four kids every year. Our ranch lends itself to some easy kind of hunting or some difficult type of hunting, so we can offer both.” The hunting trips include deer hunts at the Fiddleback, which is the home ranch, with elk, antelope and mountain sheep hunting on other nearby lands.

“When we bought the Fiddleback, I was going to slow down a bit,” says Duaine, admitting he is also involved with raising and training horses and other activities on the ranch. But working with the youths who are facing personal health challenges is rewarding. “I wanted to finish out my career doing this Outdoor Dream stuff. It was a way for me to give back to our industry.”