An old photo is reexamined by the world’s top Doc Holliday expert.

“Doc Holliday is ten feet tall and weighs a ton.”

The first time we saw this historical group photo taken in Las Vegas, New Mexico Territory, was in 1998 in Frederick Nolan’s book The West of Billy the Kid. Recently, some have suggested after closer study of the image, that Doc Holliday might be one of the nine men
standing outside the Old Town Las Vegas Jail in March 1880.

So we went to the foremost Doc Holliday expert, Gary L. Roberts, author of Doc Holliday: The Life and Legend, and here is what he said:

“This somber image was taken at the Old Town Jail in Las Vegas, New Mexico, in March 1880 during or after John Joshua “J.J.” Webb’s trial for the murder of a freighter named Mike Kelliher. Webb was a policeman in East Las Vegas (New Town), and a coroner’s jury ruled the killing justified, but the violence and crime associated with New Town prompted the San Miguel County Grand Jury to indict Webb for murder.

“What we do know is that Doc was in Las Vegas at the time for his own court dates and to settle some business matters besides, after spending the winter in Prescott, A. T. In fact, Doc appeared in court on March 2, 1880, the same day that Webb killed Kelliher. He was still in Las Vegas when Webb was convicted and sentenced to hang on April 9, 1880.

“Holliday’s Saloon was one of Webb’s hangouts when Doc was running the place in 1879 before his departure to Prescott in company with Wyatt Earp and other members of the Earp family. It is safe to say they knew each other well and were on friendly terms.
I find it consistent with Doc’s character that he would have visited Webb.

“Dodge City was interested in Webb’s case as well.  Webb had served frequently as a police officer with Bat and Jim Masterson in the pursuit of outlaws. The day after Webb’s conviction, Michael Sutton, a prominent attorney in Dodge City, left for Las Vegas with a petition on his behalf and money collected to assist in his appeal.

“In April, Dave Rudabaugh and John Allen made their failed attempt to help Webb escape, although Webb appears to have attempted to help the jailor who was shot (and killed) by Allen, rather than attempt to run. (I think he still hoped he would be pardoned or his sentence shortened at the time.)

“Looking at the photo itself, notice the rather stark difference between the rumpled clothing of most of the men in contrast to the dapper and well-fitted attire of the man we think could be Doc. This is something consistently commented on by observers of Doc through the years—his immaculate style.

“Doc was less than six feet in height, how much depending on the observer. In 1882, the Denver Times described him as a ‘delicate, gentlemanly man, apparently not weighing more than one hundred and thirty pounds….’ The Pueblo Chieftain described him as ‘a man of slight weight, rather tall, smoothly shaven, and is always well dressed.’ The Denver Tribune called him a ‘thin, spare man,’ and the Denver Republican wrote, ‘Holliday is a slender man, not more than five feet six inches tall and would weigh perhaps 150 pounds.’ He was described later as a ‘mild-mannered little fello’.” At the time of his Leadville fracas with Billy Allen, he said that he weighed 122 pounds.

“His spare figure and better fitted clothes may actually make him seem smaller. Webb was definitely heavier, but he’s not that much taller in the photo. Remember that six-footers were less common then than now. It is one of the things that seemed to separate the Earps in newspaper descriptions.

“I’m not a photo expert, but this is a place that he could well have been, and he stands out in this photo in precisely the same ways that 19th-century reporters described him. Are any other of the persons in the photo identified?

“I don’t have a definitive answer, but I wouldn’t bet against it being him.”

Billy the Kid also spent time in the Old Town Las Vegas Jail, when Sheriff-elect Pat Garrett came through on his way to Santa Fe to collect the reward on the Kid. This was in December of 1880. There has been some talk, online, about Bullshit Jack also being in the group photo. As you might recall if you read True West magazine, we published a long-lost newspaper clipping, courtesy of James B. Mills, about the Kid and Bullshit Jack being in the Santa Fe Jail together (TW, April 2020).

Again, we turned to our esteemed colleague, Gary L. Roberts, to weigh in:

“I do not recall an article mentioning Doc and BS Jack visiting Webb or about the photograph. By any measure, it is an important photo. If this is indeed Doc, it is especially noteworthy. I don’t remember a newspaper reference to the photographer or to a gathering of friends. On April 4, the Las Vegas Gazette reported that Jack Allen and Dave Rudabaugh called at the jail to see Webb. Their visit was a rather pitiful attempt to free Webb. Once they were inside, they shot the jailor and threw the keys into Webb’s cell, ‘telling him that there were the keys that they must go.’ Even the paper was surprised at the ineptitude: ‘How did they imagine that he should get out and escape on foot without arms?’

“This photo was taken within months after the well-verified Prescott photo of Doc that Craig Fouts acquired from the McKey family in Georgia. The Prescott photo was made in the late fall of 1879, and this photo was likely made in March 1880. In the photo with Webb, Doc is wearing a hat and a topcoat which makes him look a little heavier.” 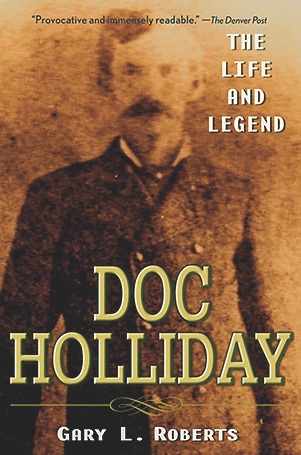 Doc Holliday in NonFiction and Fiction

Where to start? In nonfiction, the definitive biography of the Southern dentist-turned-Western gambler-gunfighter
is Doc Holliday: Life and Legend by
Gary L. Roberts (Wiley). After reading Roberts, we recommend:

Since Walter Noble Burn’s Tombstone: An Illiad of the Southwest was published in 1927 Doc Holliday has been a favorite character of novelists dramatizing the life of the legendary Westerner. We recommend the 1999 University of New Mexico edition with a  foreword by Earp biographer Casey Tefertiller. After you read Burns and Tefertiller, we recommend these novels: