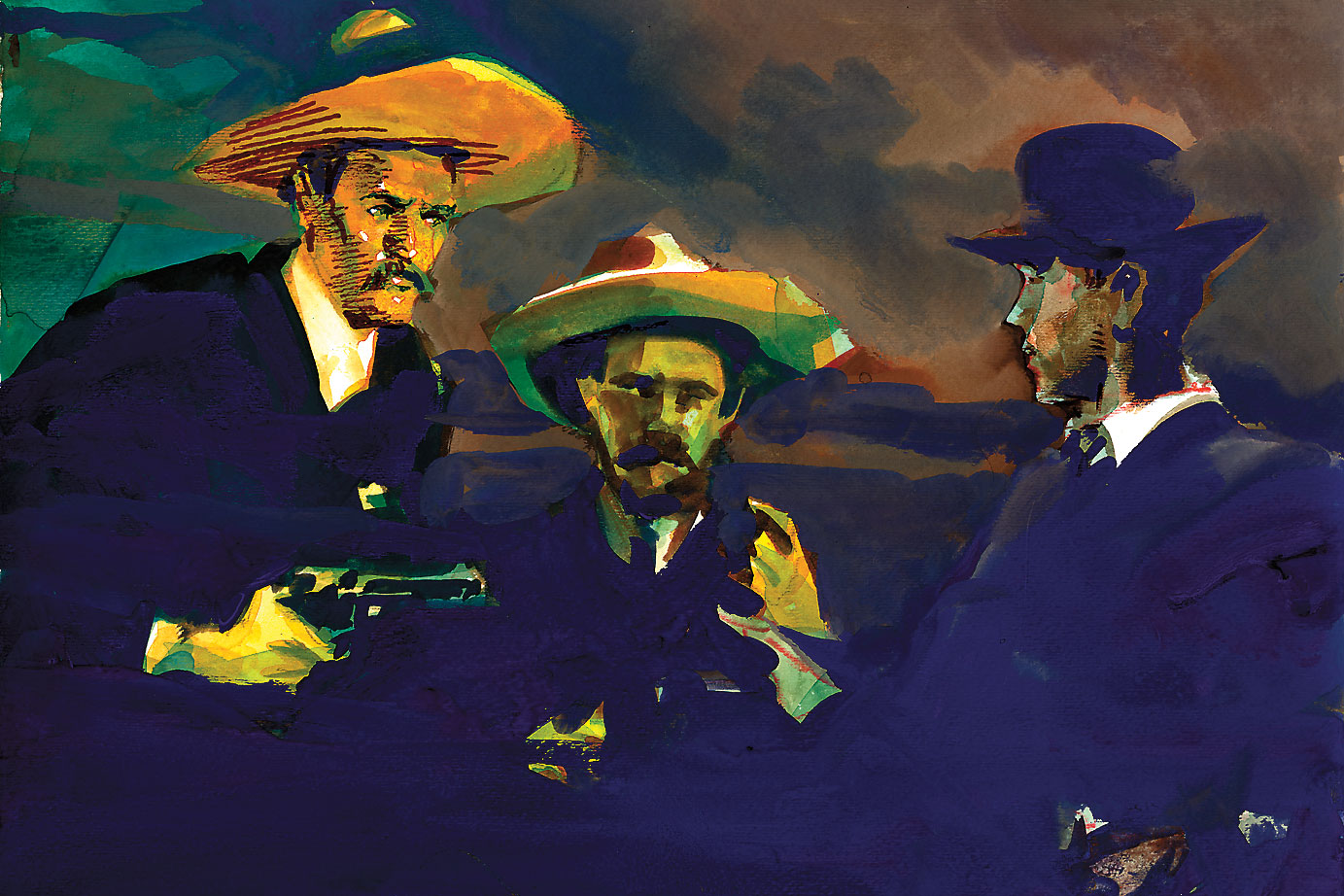 Arizona Ranger Jeff Kidder rides into Naco, Arizona, to renew his commission. Upon finding out that Capt. Harry Wheeler is chasing outlaws in the Chiricahua Mountains, Kidder crosses the border to “meet friends.”

Removing his gunbelt, Kidder sticks into his waistband his silver-plated Colt and into his coat pocket six cartridges from his gunbelt.

Kidder eats supper on the Mexican side, then strolls through the small downtown, visiting several cantinas. Around midnight he spends time with a soiled dove, “Chia.” After he dresses and walks to the front door, he notices a silver dollar which he carried in a vest pocket is missing. He goes back inside, grabs Chia by the arm and accuses her of stealing it. Chia strikes Kidder with her fist and starts screaming, “Policía!” Within minutes, two Mexican police officers, Tomas Amador and Dolores Quias, arrive on the scene and open fire.

Tomas’s first shot strikes Kidder in the stomach, just left of the navel. Falling to the floor, Kidder pulls his Colt and gets off several shots, hitting both his assailants. Quias was hit in the thigh; Tomas took a bullet to the knee. Kidder stands himself up and staggers out the doorway into the night.

He heads toward the U.S. boundary, some 300 yards (see map, opposite). Several Mexican citizens fire at him, and Kidder angles off to the fence to the left of the border crossing. Too weak to climb through the fence, Kidder reloads his pistol with his last six cartridges.

Led by Chief of Police Victoriano Amador, the brother of an officer who shot Kidder in the cantina, the Mexicans close in on the Arizona Ranger. Kidder nicks the chief in the side, then runs out of bullets as he yells to his attackers that he is all in.

Chief Amador and a score of men rush to Kidder, who is sitting against the fence, and begin hitting him with pistol barrels. They drag him  to the juzgado (government court and jail) with bystanders kicking him all the way. After stripping him of all his valuables, they dump him onto the floor of a jail cell.

The Arizona Rangers Didn’t Outlive Jeff Kidder By Much

Formed in late 1901, the Arizona Rangers was supposedly the territorial version of the Texas Rangers. Across the territory (and sometimes into Mexico), 107 men battled cattle rustlers, horse thieves and desperadoes. But unlike the Lone Star law crew, the short-lived Arizona outfit lasted roughly seven years.

Politics brought down the Arizona Rangers. A Republican administration created the Rangers, so Democrats made it a priority to kill the agency. Several anti-Ranger bills failed, yet in 1909, the Democrats had veto-proof majorities in both houses of the Territorial Legislature.

GOP Territorial Gov. Joseph Henry Kibbey fought hard against the efforts, but the opposition was too strong. (He was also pushing for Arizona statehood and trying to save his own appointed job—he failed there too.) By the first week of February 1909, both chambers had voted to abolish the Rangers.  Kibbey vetoed the measure on February 15, but the legislature overrode his action that same day. The Arizona Rangers were  disbanded immediately.

Ironically, on this same day, Arizona Rangers apprehended horse thief Peter Morris in the Chiricahua Mountains. Ranger John McK. Redmond, who was searching for rustlers in the mountains, didn’t hear about the abolishment for four days.  “It would have been a pretty ‘howdy-do’ if I had been killed….” he said.

After being beaten and stripped of his belongings, including his pistol, his badge, his pocket watch and his Masonic key, Jeff Kidder was left to lie on the floor of the jail cell with no offer of medical attention.

Several hours later, word of the fight reached the American side. A Mexican judge in Naco permitted Kidder to be moved to a private home, but he was still under arrest. By dawn on Saturday, a physician from Bisbee, Arizona, crossed the border to aid Kidder. He determined that Kidder’s intestines had been perforated and chances for recovery were slim. A reporter for the Bisbee Review interviewed Kidder, who seemed to rally for a brief time.

On June 29, 1867, 2nd Lt. Lyman Kidder (Jeff’s uncle), along with an Indian scout and 10 enlisted men, took dispatches from Gen. William Sherman to Gen. George A. Custer, who was camped on the Republican River in Nebraska. The men failed to arrive. Custer’s scout Will Comstock found their mutilated bodies just north of the banks of Beaver Creek in Sherman County, Kansas. Oglala Lakota leader Pawnee Killer, with a small band of Sioux warriors and Cheyenne Dog Soldiers had killed them. Shown here is The Kidder Massacre, drawn by J.P. Davis and published in George A. Custer’s My Life on the Plains (1874).

Before he died, Jeff Kidder claimed he crossed the border to look for a fugitive. He died at 6:30 Sunday morning, 30 hours after he was shot.

When Mexican authorities refused to release Kidder’s body, 1,000 American men reportedly gathered to storm the border and bring him back. The authorities relented, and Kidder’s remains were taken to the Palace Funeral Parlor in Bisbee, Arizona.

East of Tombstone, Ranger Capt. Harry Wheeler heard about the killing and made it to Bisbee in time for the funeral, where he said, “Jeff Kidder was one of the best officers who ever stepped foot in this section of the country. He did not know what fear was and was hated by the criminal classes because of his unceasing activity in bringing them to justice.”

Wheeler believed Kidder had been set up to be killed. A Mexican investigation found some evidence to confirm his suspicion, although nobody was ever charged.

On April 8, members of the Bisbee Elks Lodge escorted Kidder’s coffin to the depot; his remains were sent to California for burial.