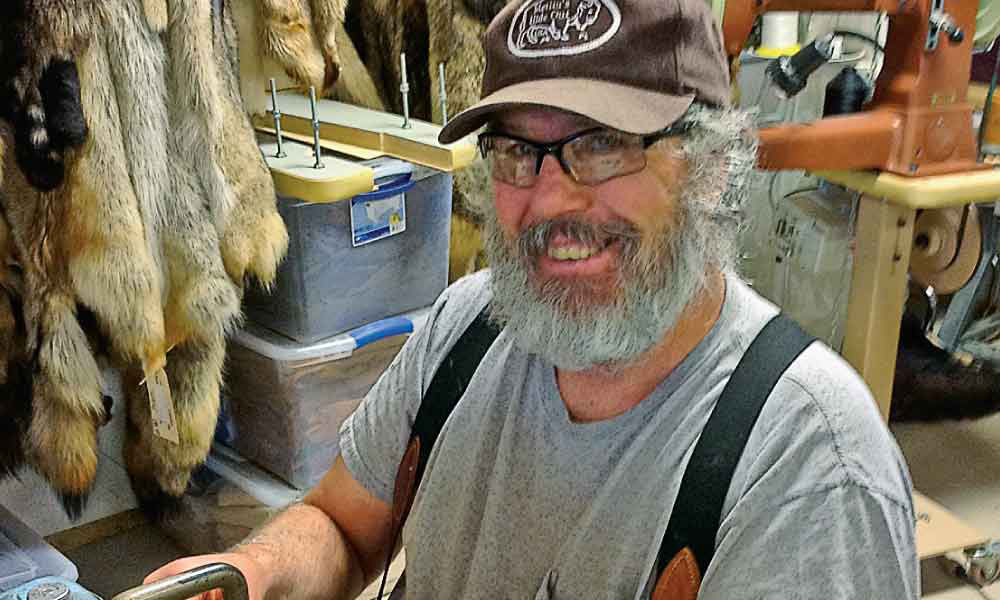 Merlin’s Hide Out came to be when I decided I needed a new pair of gators made from beaver hides. Instead of ordering them on the Internet, I trapped the beaver, tanned the hide and made the leggings myself.

I got involved with The Hateful Eight when Courtney Hoffman, the head designer, called out of the blue looking for buffalo hides. She needed the hides for a buffalo coat, and I told her that I also make buffalo coats.

I had to craft eight buffalo coats for the movie. Since two hides make one coat, and the hides must match in color, size and other attributes, my wife, Barb, and I had to look through more than 250 hides to find 16 matching ones. Hoffman needed eight versions of Russell’s buffalo coat because Director Quentin Tarantino’s scenes are often so blood-soaked.

I first started sewing leather in 4-H when I was nine years old. I always thought that you sewed everything by hand until I was 30 years old and bought my first sewing machine.

I learned how to tan hair on hides by trial and error and much research. It took several years to perfect my method.

Buffalo hides require a lot of labor of love. The average buffalo hide weighs 75 pounds fresh, and you are continuously handling it for 25 days until it has completed the tanning process, at which time it will weigh an average of 20 pounds.

The buffalo come from ranches. When the buffalo are harvested for their meat, the hide becomes a by-product.

When I’m not tanning hides, I’m in the great outdoors. Hunting is a passion, but it only lasts three months. In the other months, I enjoy just taking a drive and looking around.

Growing up in Thermopolis, Wyoming, is like growing up in small town America. Our ranch was 10 miles from town, so it was a big deal to go to town once every two weeks.

Wyoming winters have became so much milder than when I was growing up. Twenty below for several days was not uncommon. Now we are lucky to see zero degrees for a day.

My family has been ranching in the area since 1933, when my grandfather moved here from Nebraska to work on a ranch that later became his.

My favorite Western movie is 1969’s True Grit. It is a great portrayal of how the West was—at least that’s what I want to believe. John Wayne is my hero.

What people don’t understand about life in a small town, without a Walmart, is that you can find everything you need—it just might not be what you want.

Nobody told me that life would be this much fun!

The person who’s inspired me the most is Ray Banister. I worked for him on his ranch for about five years. He told me to find the hardest job that there is and do it faster and better than anybody else, and you will never be out of work. I have never forgotten this.